I have been told (and have also seen experimentally) that an inductor with a high core loss will introduce "glitches" to the ripple current in a switch mode power supply. I have tried researching this, but can't seem to find any information. Below is an example of what I mean by "glitch". An explanation of why this is occurring would be great, and I would also love to be directed to any literature on this topic that I could research further. 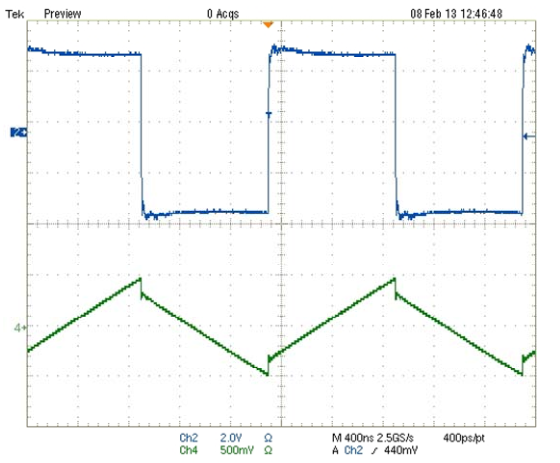 Edit: Below are two waveforms I just took. The circuit is a synchronous buck converter, and the parts are the exact same. Out of 30 inductors, 15 were purposely damaged and the other 15 were left undamaged. All 15 damaged parts exhibit the "glitch", while all 15 undamaged parts do not. The original waveform was actually from user 'gsills' while answering an unrelated question of mine "Ripple current in synchronous buck converter". I have also heard this elsewhere, not only from gsills.

The below waveforms are from the exact same circuit, only the inductors were swapped out.

One of the undamaged parts:

One of the damaged parts:

For some reason there is a little added slewing on the switch node voltage waveform. I've used this same circuit many times and that generally doesn't occur.

Core loss is caused by current induced into the magnetic core, which is effectively a secondary winding with a resistance across it.

Since the voltage going into this 'transformer' is a square wave, the current and voltage across the core resistance is also a square wave. If you remove the slope caused by current flowing into the buck converter's load then this low amplitude square wave is what's left.

Here is an LTspice simulation showing the effect. L2 and R2 represent the core 'secondary winding' and its resistance (shown as the equivalent 1:1 transformer - in reality it is a single turn with extremely low resistance):- 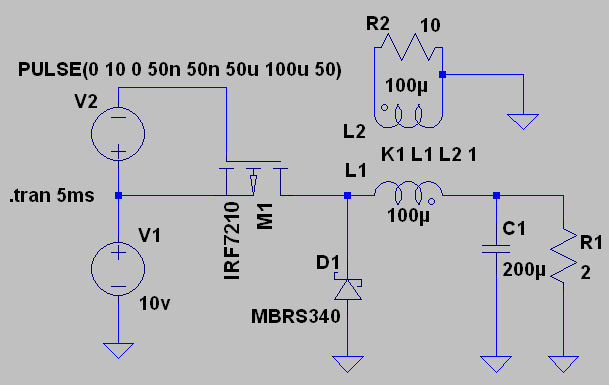 I(L1) is current going through the inductor. V(n002) is voltage across the core resistance. 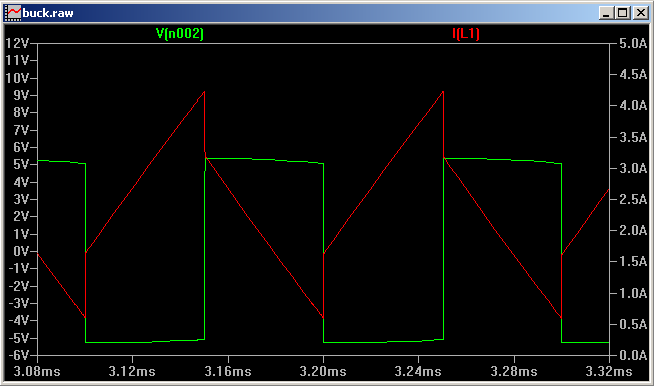 Losses can be due to eddy currents. These result from the changing magnetic field inducing current flows in conductive particles in the core material. Think of then as tiny secondary wingdings on your inductor, with resistive loads. When you apply a voltage across the inductor winding, magnetic flux rises and induces an emf in the winding opposing the applied voltage. Voltage is also induced in the conductive partials and a "secondary" current flows. The flux produced by the winding if proportional to the current flowing in it. These secondary currents produce their own flux, reducing the total flux in the core. In order to maintain the same core flux, a greater current is required in the winding to overcome the contribution from the eddy-current induced flux. This is exactly the situation that you would have if you wound a secondary on the inductor core and loaded it with a resistor. The voltage across these "secondaries" is proportional to the voltage across the real inductor winding so it adds a current to the "primary" proportional to the applied voltage.

Core loss is a domain movement or alignment phenomena. At lower frequencies the loss is caused by hysteresis, and proportional to the BH loop area. As frequencies become higher, Eddy currents become more important.

It makes intuitive sense to think of core loss as parallel to the inductor since the inductor is wound around the core. It's easy to see that for a square voltage driving inductor current, the current added as loss will be a square wave (the step) in addition to the usual ramp-up-ramp-down of the ideal inductor.

A more physical way to think about it is to visualize the BH loop path as the current ramps up and then down. For most of the path, B changes a lot while H changes little, since the permeability of the core is high. But, when the current turns around (to start ramping down) the path doesn't reverse, but branches due to hysteresis. When it branches there is a period where H changes a lot, as much or more than B. Effectively the core permeability is low for this part of the path, since H is proportional to winding current-that's where the current step shows up. This is much more pronounced with very high perm, square loop materials than with ferrites.

Here are some BH curves from McLyman as example: 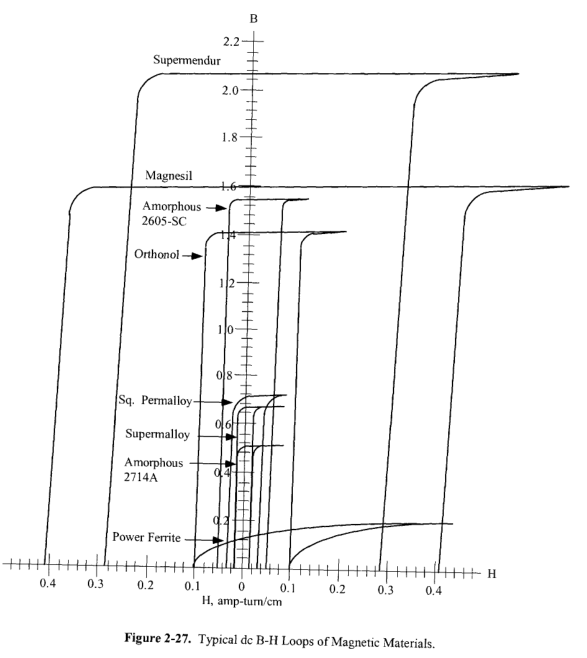 You can see why this core loss current step is hard to see with ferrite cores compared to the higher perm square materials. It'se specially hard to see with inductors since they are low perm (gapped) cores usually.

Not the answer you're looking for? Browse other questions tagged switch-mode-power-supply dc-dc-converter inductor buck magnetics or ask your own question.