Can I ground the negative DC bus of a variable frequency drive?

In general it would not be advisable to tie the DC bus to earth ground, because the AC line may also be referenced to earth. Having two competing ground references in the same circuit can cause substantial issues. I suspect the rectifier diodes would fail rapidly, if a fuse didn't save them first.

But suppose I wanted to power the drive through the DC bus terminals. In this configuration, the AC terminals are left open, meaning there is no competing ground reference. The VFD and motor chassis are tied to earth, which can lead to common mode issues, but I don't see that they'd be any worse than running from an earth-referenced AC line.

In that configuration, would there be any problem with tying the negative DC bus to earth? Is it possible to make a general statement, or would it be installation- and equipment-dependent.

It should be fine but be very careful where you make your earth bond.

You need to run the DC- all the way back to the DC supply ground point. Don't take a shortcut and connect DC BUS - to the chassis and run that back. If the DC- got disconnected the VSD chassis would go live.

I forgot to explain that R1 provides inrush current limiting on power-up and RLY1 switches in when the voltage reaches half or two-thirds of normal DC bus voltage. (Thanks, Charles.)

Grounding the dc negative bus is a really bad idea. If your substation is solidly grounded (as opposed to HRT, or ungrounded), you’ll probably just hear a loud bang at some point. If not, the bang may be in a seemingly unrelated piece of electrical equipment fed from the same sub. Look at your rectifier stage at the front end of the drive and envision that the negative bus is always about 1 volt more positive than the most negative of the three incoming ac phases. Is that “ground” potential? Nyet!!! (Must be talk like a Ruskie day)

You will probably find inductors in both the positive and negative sides of the DC filter. That is done to provide impedance to limit any fast-rising fault current in case of a ground fault on the motor lines. Make sure that external DC is connected to the line side of both DC inductors. Some VFDs have AC inductors instead of DC inductors. In that case, the manufacturer will likely say that external DC should not be connected without fault-limiting impedance. You should always seek instruction from the manufacturer for this type of connection and probably not do it otherwise.

Note that another answer shows a charging current limiting circuit. That is probably built into the VFD. Make sure that is not bypassed when the external DC source is connected.

If the fault-limiting impedance is not compromised, there should be no problem using a grounded DC source.

"Rapid failure" is an understatement of the consequence of getting this wrong. Exploded components would be more accurate. 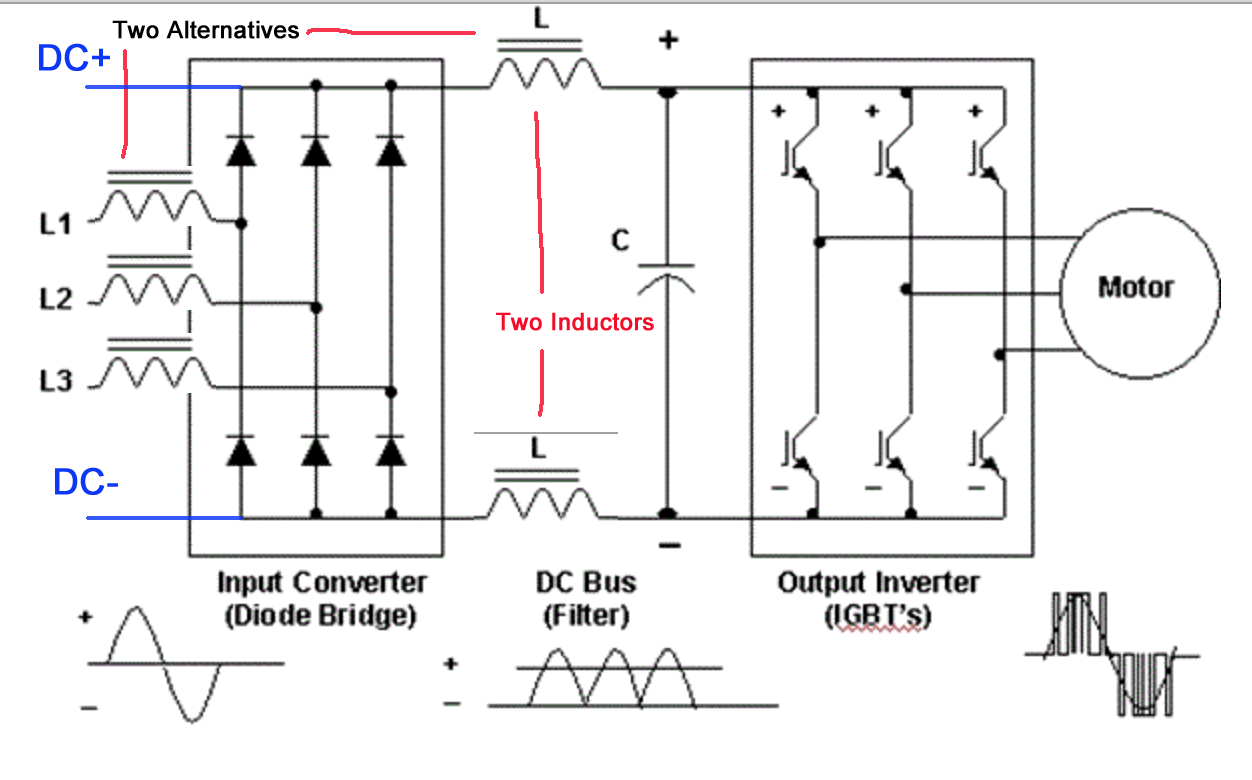 Usually when I wire the VFD, I strictly wire it from manual. I never applied ground to DC bus in no circumstance. As you self described the AC line may be referenced to ground - that's quite normal case (I never saw it floating) so your rectifier diodes would blow ASAP.
The only thing that is grounded on VFD is the casing and logic/analog inputs/outputs. There are also DC bus terminals if you want to parallel some drive, but no way to connect the ground that would be your biggest mistake.

Edit: But as you decided to power the inverter from different power source, battery bank like, then I think you should't be worried about. But you should check if the electronic part of VFD is powered from DC link or it needs AC input. I have seen special drivers that require DC/DC converter from DC link to supply the electronics in case they are supplied from DC link (or from regenerative voltage during breaking in case of power outage).

Not the answer you're looking for? Browse other questions tagged ground isolation common-mode earth vfd or ask your own question.

4
When is it appropriate to galvanically isolate components/subsytems?
7
How do I properly size components for an EMC filter for a variable frequency drive power supply?
2
Adding a resistive path between live conductors and earth - safety issues
1
How to wire 3 phase motor to VFD
1
The leads of my 3-phase motor are incorrectly labeled. How do I determine the correct labels?
1
Microcontroller to PC via USB - do I need to use isolation?
0
How to explain this solution to the common-mode voltages?
7
Is star grounding sources necessary for this data acquisition system?