Will cutting the data lines of USB still let the power to go through?

I am trying to Charge a USB connected device through a computer without transferring data.

An USB 2.0 cable should have 4 wires: Vcc, Data+, Data- and Ground. If I only cut the Data wires and let the Vcc and Ground wires connected, will it still be able to transfer power or will the power cables be shut off because of the disconnected Data wires?

It depends on the device. And on the source.

Usb spec states that a device should only use 1 block of power until it enumerates with the host. Then it can request up to 5 blocks. Each block is 100 mA. It should not pull more than 5 blocks.

In practice, very few, if any hosts limit a usb port to 100 mA at all. Some do limit ports to 500 mA (Apple computers for one, though they do allow iDevices to request more in a Apple only standard, so they are physically capable just not normally allowed). Some USB ports have very little power protection and may be hooked up straight to the 5V power source.

Now usb peripherals also have requirements for power. Dumb devices may power directly from any power source, 5V or different. These dumb devices don't even have the data lines connected. Older cell phones also allowed dumb charging. As time passed, more and more restrictions come into play. Some devices monitor the power pins for regulation, and won't work on anything outside of usb spec power (4.75 to 5.25 volts).

Some devices won't work unless a resistor pairing setup is on the data pins. Apple started this, and others followed, and there are competing standards. You can't plug a dumb 5V power supply into an iPhone and get it to charge. It will state unauthorized charger. Some devices require enumeration before charging, but this is rare. The PS4 Six axis controller does this.

And some devices will treat a dumb charger as unsafe, and limit charging to 500 mA or less. Most modern cell phones do this. If the data lines do not have a resistor indicating it is a high power charger.

In short, a usb cable plugged into a computer without the data lines will either not work, work slowly, or work fine, depending on your computer and your device.

As a side note, there are commercial usb cables that have a data or charging switch, allowing you to disconnect the data lines to prevent data communication. They typically switch in the resistor setup, but it varies. 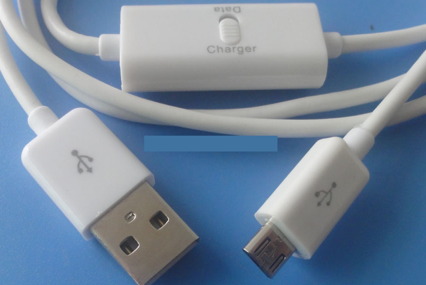 yes, but you are breaking the rules if you take more than 100mA

the device may not like recognise the computer as a charging source with the lines cut, so charging may be much slower.

there are adaptors that make the compute pose as a 2A charger which will give a fast charge.

Cutting the data lines will let the device charge in most circumstances. Some devices are too smart and want to negotiate with the host device to determine maximum current available, but even these I suspect will default to a low value if comms isn't available.

Not the answer you're looking for? Browse other questions tagged power usb ground usb-device data or ask your own question.

2
Will cutting only the Power Lines damage the Data Lines or the Device?
1
powering a circuit with USB micro; what to do with unused pins

1
Does a cable exist that would allow me to power a USB device via 2A while also connecting it to a computer for data transfer?
0
If a USB Cable is being used between two devices, are the power wires needed?
2
Will cutting only the Power Lines damage the Data Lines or the Device?
9
USB Power - The basics
0
Power-only USB connection to charge my phone - as simple as cutting the data lines?
2
USB 3.0 power and usb 2.0 data
1
Fitting USB Data in Cat5 Cable with External Power
3
USB C PD fast power role swap
0
4 Pole Connector and USB cable compatibility