I have a 120 V / 60 Hz 2000 watt inverter which can draw up to 200 amps from a 12 V DC battery source. An AC oil heater drawing 6 amps max 15 amps is running from the inverter constantly. I want to automatically change batteries without interrupting the current to the inverter.

The scenario is: several batteries are supplying the inverter. When a battery becomes depleted it is replaced with a charged battery. The invertor cannot go off line so a battery must be on line at all times. The depleted battery is switched to a charging circuit until it is fully charged then it is available to be switched to the inverter load. The battery being charged must be isolated from the inverter during charging.

Currently this is a manual process and I'd like it to be automatic. I'm looking for: the best way to detect the depleted battery, swap the battery from the inveter to the charge circuit, detect the fully charged state then return the battery to the load circuit.

This application is an off grid. Any advice will be helpful.

There might be better ways to do this but we need more details on the topic.

However one possible way around this is Voltage sensor + high current Mosfet switch.

Feel free to use a micro-controller of your choice. Make sure it has adc capabilities(almost all have). You job will be simple if it has as many adc pins as the number of batteries you are planning to switch between. If that's not possible, you can always use multiplexers to do the job.

Voltage sensing: Make a voltage divider to bring the charged battery voltage within range that can be measured by your micro-controller (5V, 3.3V or whatever your adc pin allows). Make sure your adc pin never sees a value which is out of range. For ex - If battery has a max voltage of 15V and my adc can accept max voltage of 5V, I can use this circuit: 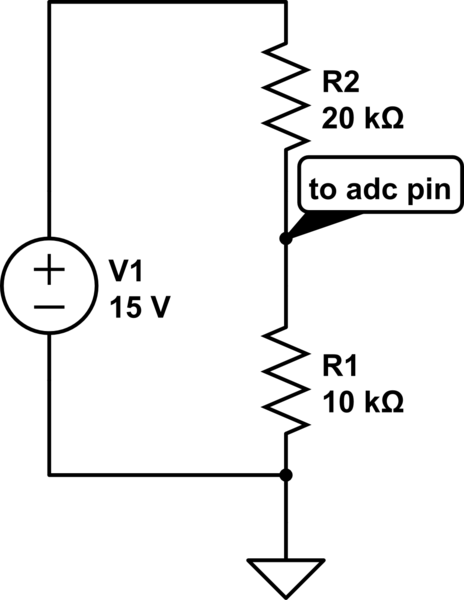 This will allow you to sense the battery voltages. You will know which batteries are ready for getting fed into the inverter.

For switching, you need a high current mosfet - one for each battery. Parametric search on digikey will give you some results. If your max current can be 200A, better to select a value higher than that - probably 2-3 times.

Another solution (cheaper) is electromechanical relay but at that current, arcing might kill it very often.

If you are using mosfets, you will have heating issues so you will definitely need to attach massive heatsinks to your mosfets. Having a common heatsink for your mosfets might help because only one mosfet will remain ON at any particular time. Due to the big size, cooling will be more effective as compared to a small detached one. Assume a power dissipation of 150-200 watts in your mosfet while carrying 200A. If that's a concern, you probably shouldn't go this way.

As others have already noted in comments to your question, you have a fundamental problem in your setup in that you are using more power than you can supply.
Even assuming you start off with a bank of fully charged batteries all ready to be swapped in, no matter how many batteries you have you are only delaying the inevitable.
If you can't charge a battery from empty to full in the same or less time it takes to drain it from full to empty then you will only end up with more & more batteries waiting in the queue to be charged - eventually leading to a bank of empty batteries with one being charged and none available to be used.

No, this doesn't answer the actual generic question, but addresses the issue which really makes it unanswerable in your specific application.

There are so many problems here. First, it is always better to have a single (or maybe two) large battery bank than many small ones. Because then you will be discharging the individual cells more slowly, which means the discharge time will be longer, and the number of discharge cycles over cell lifetime will be greater. This is probably the main reason people do not switch individual cells in and out in an engineered system.

As others have pointed out, if the charger cannot supply enough power to run the load, then eventually you are going to run out of batteries anyway. But to delay that eventuality as long as possible, you want to use a large battery bank, not a bunch of small ones.

I imagine that you should be able to switch batteries using MOSFET's or IGBT's. The max current rating should be higher than 200A and probably the highest you can find available, but I don't normally design power electronics. You will want to connect the new battery prior to disconnecting the old one, but the interval where both batteries are connected to the load should be kept as short as practical, because the "good" battery will be running the load AND charging the bad battery with a very high current. Each battery should have a fuse in case something goes wrong with the switching scheme.

You can use a simple voltage threshold to detect depleted batteries. Deciding on the best endpoint would require quite a bit of knowledge and work. If you insist on your ill-advised plan, then you will be discharging a single battery at over 200 Amps, so you can probably consider the battery depleted at 10V. If you create a large battery bank that can supply 200A for many hours, you could consider using a higher voltage (maybe 10.5?) as your depletion threshold.

Most 12V batteries are not designed to supply 200 Amps continuously. I don't know what kind of batteries you are planning to use, but I am skeptical that they will last for very many charge/discharge cycles with this type of use.

1
Number of cycles for AGM battery with an inverter
1
How to charge an AGM battery fast?
0
Battery support capacity for inverter supply of 30A over 3hrs
0
Wire size for battery interconnects
0
Electric grinder not working with my power inverter
0
Measuring battery voltage in PV scenario with MPPT charge controller with inverter
0
Solar battery draining too fast