I am working on a Magnetometer AK8975 being a part of an IMU. Which seems to be very tricky for me. This chip gives a 3D vector as output describing earth's magnetic field at any place on earth or near it.

I tried two types of heading calculation algorithms: One is simple arctan(-y/x) and another is inclination (pitch) and bank (roll) canceled maths as mentioned in below. Both on inclination and banks give wrong output.

I am able to get the correct heading w.r.t the earth (using simple available open study resources) when it is rotated keeping horizontal w.r.t the ground plan using any of the two algos.

I tried calibration for soft and hard iron errors. I Could plot it in 3D and shows a perfect 3D sphere. Still doesn't work on inclination or declination.

Any pointer will be helpful.

The code and its implementations are as below:

Where magnetom_x, #_y and #_z are components of a 3D vector which actually are RAW values from the Magnetometer. roll and pitch are from a mysterious Kalman-filter output from onboard accelerometer and gyroscope. These three sensors are in ATAVRSBIN1. The roll and pitch are ok till this stage.

Data in format Roll, Pitch and Yaw. I rotated the device by my hand only. First three have been concentrated on only Roll, Pitch and Yaw respectively. Rest two are first rotated the device around 45 degrees along X (Rolled) then rotated along Magnetometer's local Z. Then same has been repeated with around 45 Degrees rotation along Y (pitched) then rotated along Magnetometer's local Z. 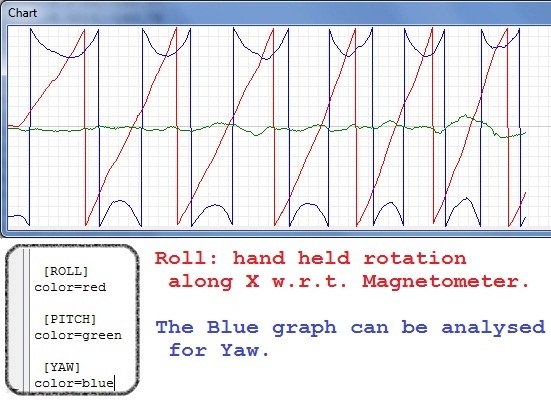 Angles in degrees in a file The YAW characteristics on Roll. 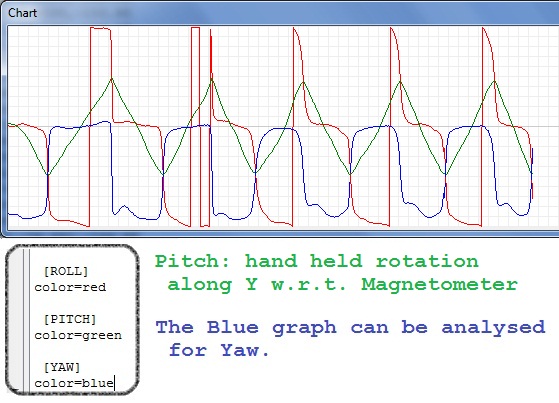 Angles in degrees in a file The YAW characteristics on Pitch. 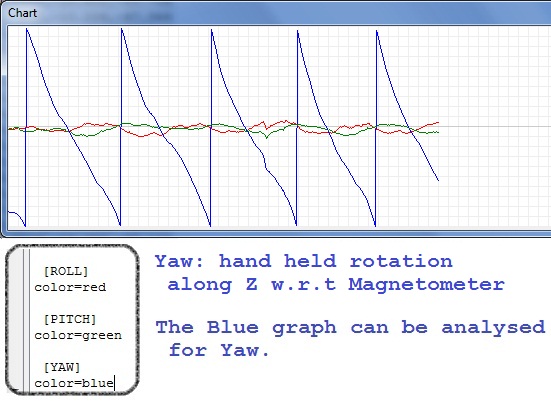 Angles in degrees in a file The YAW characteristics on Yaw itself.

Angles in degrees in a file The YAW characteristics on Yaw with 45 degrees rolled.

Angles in degrees in a file The YAW characteristics on Yaw with 45 degrees pitched.

Note: For last 2 pictures: First kept in home position, that is same for all (refer txt files). Then Rolled 45 degrees then using the plane device (with magnetometer) has been rotated along Magnetometer's Z-axis.

Similarly for last image the device has been pitched 45 degrees then along Magnetometer's Z-axis.

I hope these will help solving my issue.

New developments are as follows:

I worked some on the Heading. I got following output.

I like your graphs. They clearly show that roll, pitch, and yaw seem to be working. Congratulations! That's already more progress than most people make.

It would be a lot easier for us to help you if you gave us: (This is the "describe the symptoms" section of "How To Ask Questions The Smart Way" )

So I'm left to speculate that perhaps you're running into the same sorts of problems I create for myself :-).

The application note for the LSM303 has a useful guide to calibrating a tilt-compensated compass which is applicable to your problem. It is quite detailed, otherwise I would have re-written the calculations here. Note that the accelerometer values are necessary for full pitch, roll, and yaw calculations as a rotation around the axis of the magnetic field lines results in no change in magnetometer values. Likewise for gravity with the accelerometer.

Not the answer you're looking for? Browse other questions tagged calibration imu magnetics or ask your own question.