My calculations for battery capacity are as follows

Your 8.75mA is high by a factor of three. You've effectively summed the charge transferred in a 3 second period and not divided by 3s in order to get coulombs-per-second, or amps.

So the average current is about 2.88mA and theoretically speaking, you could perhaps get (2000mAh/2.88mA)=693hr=28 days from the batteries. However, the problem is that batteries lose their capacity more-rapidly at higher drain currents than at lower drain currents. If you're using a very high-quality, high-current battery (e.g. an Eneloop NiMH) then you probably will get the rated capacity from it.

A cheap battery under 200mA+ peak load will discharge faster than indicated by its rated capacity, which means that the actual capacity available to you will be reduced. However according to that Toshiba datasheet, the discharge curve is pretty linear even down around 3-5 ohms load (where you are with your peak currents), so the performance calculation above is probably close to valid if you use the Toshiba cells. For a cheap cell or even worse, Zinc battery, it will be much much worse.

After 18 days, you will have used 18/28=65% of the capacity. If you take the 2 ohm 140-minute voltage discharge graph at bottom left as being representative of the cell's discharge-time/voltage curve (it may or may not be, because it's a very heavy discharge and you might have a constant-current instead of constant-resistance load) and look at it at 0.65*140=90 minutes, that gives you a voltage of about 1.05V/cell. So you might expect to see about 4.2V on your 4-cell pack after 18 days of use. There are lots of uncertainties there though.

The "capacity" of an AA battery depends on the magnitude of the current drawn.

Here's a typical example from Duracell for their "Plus" AA batteries: 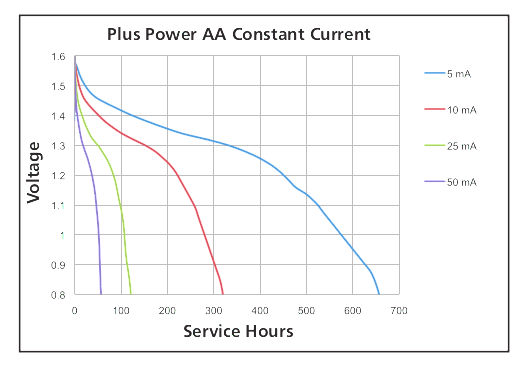 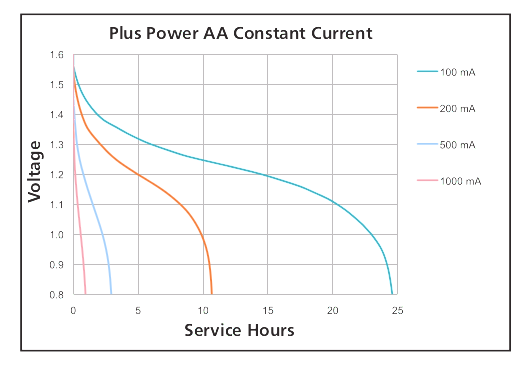 So to accurately calculate the voltage after 18 days with the duty cycle you mention probably requires a much more sophisticated mathematical approach than any I've seen so far.

In particular, using averages is unhelpful, short bursts of high current deplete the battery much faster than a low constant current of the same average value.

The first formula is used for both the standby and active currents.

In this case, the total time period is 3 seconds, based on your numbers. For Standby:

The Total current is simply added up.

Assuming average of 2800 mAh for any quality Alkaline AA Battery, we can calculate the total time:

Since you need days, divide hours by 24.

While there are some environmental factors that may limit the battery, the 2800 mAh rating for an AA battery typically already considers this.

You can read an in-depth look at the calculations in this Texas Instruments white paper: Benchmarking MCU power consumption for ultra-low-power applications.

Not the answer you're looking for? Browse other questions tagged batteries capacity or ask your own question.

9
Battery Ampere-hour rating vs Battery Amps (not an experienced user)
2
How are cell failures handled in large lithium battery packs?
0
Battery Capacity
0
Purchasing a battery for a 12VDC, 5A device
14
Calculate battery life
0
high drain lead acid battery concern
2
Why Peukert's law is always ignored in battery(lead Acid) guides available on Internet?
0
Is there a reason why lower voltage batteries are preferred for high AH?
0
Solar battery draining too fast