Like a lot of people I'm building a little transmitter unit with one of those cheap 433mhz transmitters and an ATTiny85, and I am having a problem with the power supply. Actually it is only the power supply, everything else works nicely. But my battery is dead my morning, where 'dead' means under 4v and the circuit no longer works.

I initially tried with three AA batteries to power both RF and ATTiny. That worked but the range was not as good as I need. I got about 30m using 17cm whip antennae on both transmitter and receiver. That doesn't reach my letter box :)

The battery I'm using is a 23A, about an inch long, alkaline 12v. It keeps the device quite small.

What I am looking at next is using an LP2953 pretty much like this (from the data sheet): 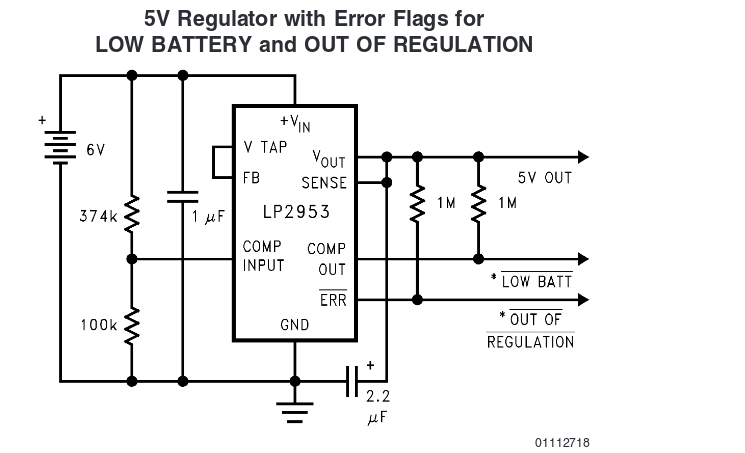 I would delete the 'out of regulation' but keep the 'low batt' signal if I can, I had that working on the earlier 4.5v AA version of this. I think it means I need to change the voltage divider on the left. What I've read is that the LP2953 ought to be smarter about sucking battery, though I also notice in the data sheet they recommend hooking the designated pins to a copper base on the PCB, so if it is dissipating heat that means it is still sucking my battery isn't it?

This guy used a CR2032 but that only gives 3v, not enough range for my application. This guy has a slightly similar question which has an answer (from me!) but not to this question.

Given this is my third try at powering this thing any advice is appreciated. The receiver end has another ATTiny85 hooked up to a Beaglebone and that all works nicely.

Unfortunately a linear regulator is a linear regulator - it drops the excess voltage and dissipates power as heat ... so just like the 7805 you had, the LP2953 is still a linear regulator.
12V in to 5V out makes it never much more than about 40% efficient, so however much power your ATTiny is using - 1.5x that is being wasted as heat in the regulator.
You could improve the regulator efficiency and reduce wastage significantly by using a DC-DC switch-mode regulator instead. They're more complicated to build from scratch, but ready-made modules are available - some are even drop-in replacements for the 3-pin 78xx linear regulators.
Chose the right one and you should easily get 80% or better efficiency from it.

The main problem in this electronic circuit is the chip transmitter.

When the transmitter is not trying to send data, it consumes a lot of energy.

The solution I can suggest to you is to MODIFY the Hardware and Software using a transistor (2N2222, BC547 ...) between the 12V cell battery and the transmitter (such as a switch).

You must add instructions to your Atiny code for controlling the state of the transistor before sending the data (On) and after sending data (Off).

And finally, you can put the ATTiny85 in Sleep mode in order to extend the battery life (interrupts or WDT). 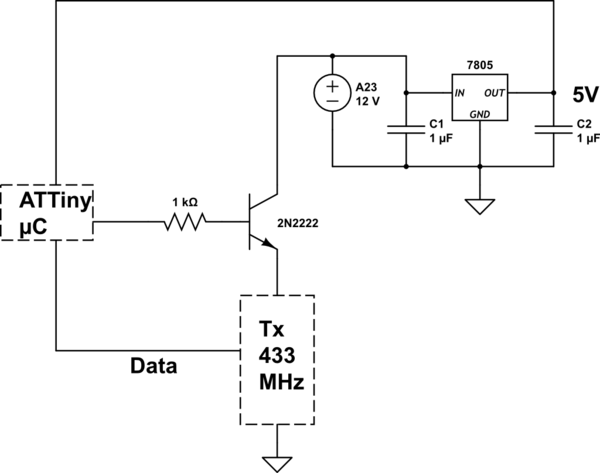 Not the answer you're looking for? Browse other questions tagged voltage-regulator attiny 433mhz attiny85 or ask your own question.

3
433MHz RF transmission only working when holding usb cable in the air
4
433 Mhz + Attiny85 improve range
1
Build remote wireless Wake-Up with Attiny85
2
Missed Interrupt Problem with Attiny85
1
ATTINY85 variants
5
How to achieve low power consumption with ATTINY85
0
Speed of a mosfet triggered directly from the logic pin of an Attiny85?
0
Toggling 9A with ATtiny85 single-button-latch
0
Using analogRead() with ATtiny85
1
Why doesn't the Attiny85 work in this circuit?