For Phase locked loop (PLL), we can have two types of Phase Detectors (PD): Type-1 and Type-2. The Type-1 PD has an analogue multiplier (which is simply XOR for digital inputs) whose low pass filtered output is a signal which varies at a frequency equal to the difference between the input and Voltage Controlled Oscillator (VCO) frequency. The voltage v/s phase plot of such a PD looks like this: 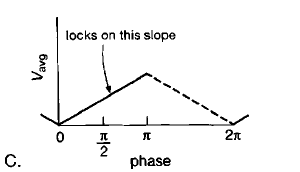 The Type-2 PD has a digital circuitry of flip-flops whose output depends only on the relative time shift of the input edges and has the average voltage v/s phase characteristics as shown below:

Why would a PLL with this type of PD not lock if the phase difference input to the PD is greater than \$2\pi\$?

The type-1 PD implemented as an XOR outputs 0 when both it's input signals are equal and outputs a 1 when they are not. It cannot distinguish between both signals so it cannot detect if Fvco is too high or too low. It can only detect that it is "not the same" as Fin.

"Why would a PLL with this type of PD not lock if the phase difference input to the PD is greater than 2π?" Your assumption is wrong, it does lock. Let me explain:

I give you two signals and a 4 channel oscilloscope. At t = 0 I provide you with 3 signals:

signal A is a 1 kHz sinewave starting at phase = 0

signal B is a 1 kHz sinewave starting at phase = π

Now tell me which signal is which ! Think about it before reading any further !

The answer is that you can only tell me which is signal B. You cannot distinguish signals A and C because a sinewave repeats itself every 2π of the phase.

Like you, a type-2 PD also cannot distinguish signals which are shifted by 2π so it will treat a phase of delta the same as a phase of delta + 2π or delta + 4π. That is why the graph only shows 0 to 2π, the graph repeats itself every 2π just like a sinewave.

It can however distinguish a phase of π - delta from a phase of π + delta ! That is it's advantage over a type-1 PD.

For a type-2 PD it is not the absolute phase that is locked, it is the modulo(2π) of that phase and that is OK as the signal repeats.

Could you please explain what determines where would the PLL lock on the rising slope for the Type-I PLL? By where, I mean what will be the final phase difference when the loop locks and whether it depends on the frequency of the input signal?

The VCO produces a frequency that can be shifted by a control voltage. That control voltage is totally derived (via filters and amplification) from the "error" signal from the phase detector. That's the back story and you should be OK with that so far.

Let's also say that the EXOR phase detector ran on 5V logic supplies. This now means that the mid-range average output voltage is also 2.5 volts. This happens when the phase of the two signals at the EXOR input are 90 degrees apart - that is what we would call true lock for a type I detector.

This scenario (absolute bang-on mid-range) produces no phase error and we would see two identical frequencies that are frequency locked and phase-locked at 90 degrees.

Now consider the scenario where we are asking the VCO to be not at mid-range. Lets say that the control voltage needed to obtain lock would be 3.75 volts. Let us also say that for the EXOR to produce an average voltage of 3.75 volts, the phase difference between its two inputs has to shift in order to accomplish this and this is the bottom-line that I think you are asking about.

3.75 volts coming from the EXOR means the phase cannot be 90 degrees if there is to be enough voltage to drive the VCO into lock. This scenario is not an altogether practical solution because there is usually a gain block inserted between the filtered output of the EXOR and the input to the VCO.

The gain block has the effect of requiring a smaller phase error to drive the VCO to the correct frequency. On the down-side, the gain block can cause instability and more phase jitter when the PLL does acquire lock.

Is this what you are looking to understand?

Not the answer you're looking for? Browse other questions tagged feedback pll phase or ask your own question.

0
Why do application notes/report become obsolete? Am i using a superseded method? Phase locked loops
0
Confusion: Lock range of PLL
0
Phase lock loop frequency of reference signal
3
How do I observe a PLL's frequency tracking once the lock has been acquired?
1
Phase Detector for PLL: Operation and Realization
0
Definition of Phase Locked Loop
1
Trouble designing and understanding lowpass filter in analog (mixer) phase-locked loop (PLL)
2
Struggling to understand how a phase locked loop reaches lock