This is a direct continuation of this question. So here's my layout, what do you think about the microcontroller side?

UPDATE April 2019: I built the board in spring/summer 2016, but never got around to updating the results here. The board works fine, and the only observable leakage of digital noise to the analog signals was from a certain poor circuit design choice in the analog/digital interface, not layout/grounding (and fixing that in a later revision removed that little noise too). Now I just had a commercial board, with the CPU section design largely based on the layout shown here, pass the EU EMC tests, so the answer is that this layout is at least good enough to do its job.

EDIT: based on Armandas' answer, I'm now under the impression that the microcontroller layout is good enough. I would still be very interested if anyone has more to say on how good this is in terms of keeping digital noise from leaking to the analog side, essentially my point 4. below. Of course any further comments about the microcontroller side are still welcome, too. 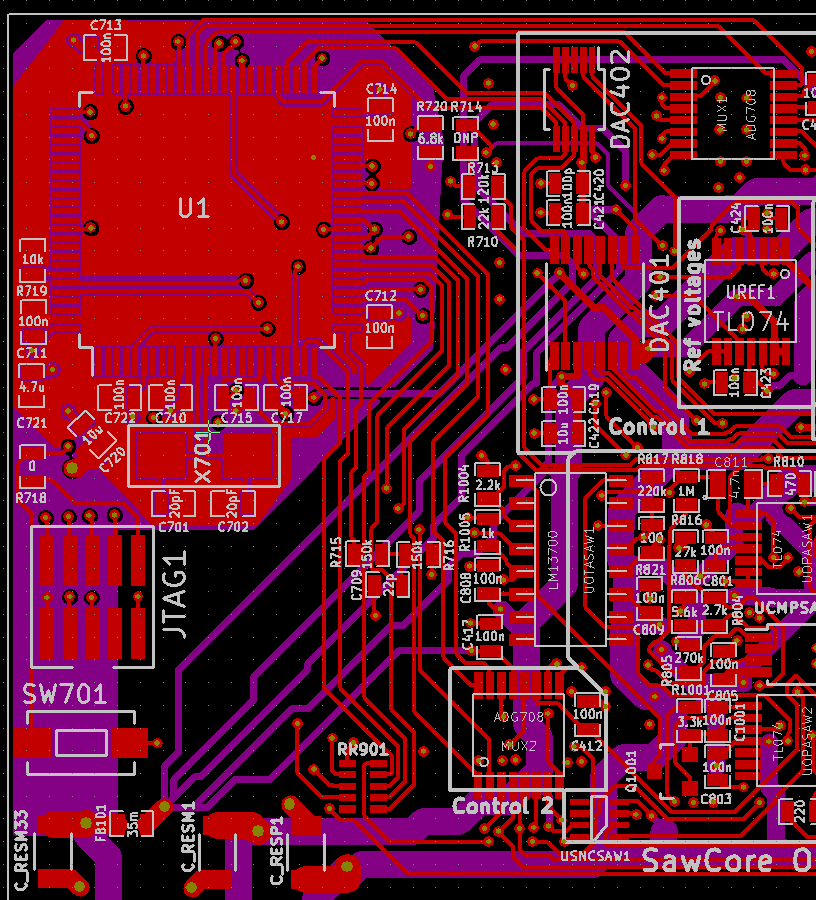 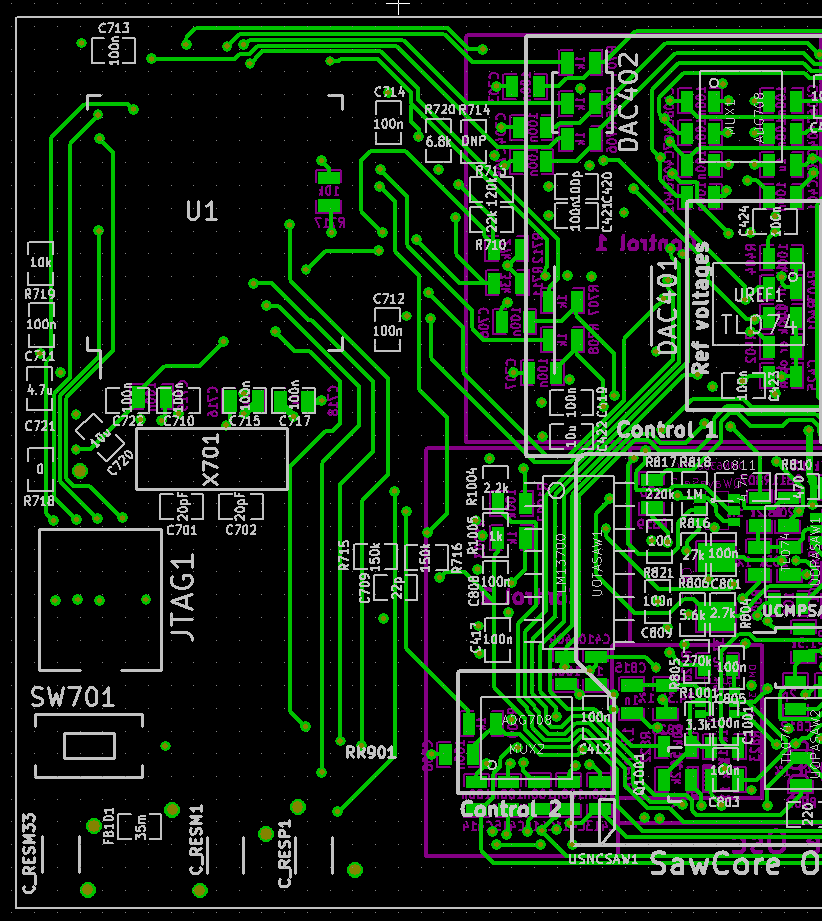 BOT (green), with top silkscreen for comparison to above

The digital/analog split (logically, the ground plane is solid) is left/right here. Power (+3.3 digital, DACs and MUXes, \$\pm15\$ analog) enters on the lower left hand corner, the three caps there are 47uf reservoir caps. A ferrite bead (FB101) separates the +3.3V tracks to the DAC's and MUXes from the uC power. The uC is on the top left hand corner and the plane under it on TOP is local ground, connected to GND with the via near C720.

The uC is an STM32F103VF, and I'll be running it at 72MHz. The crystal is 8MHz. To the right of the uC is the section marked "Control 1" which contains two DACs and a multiplexer, multiplexing the output of the uC's internal DAC1. On the bottom right hand side is another multiplexer near "Control 2", multiplexing the uC's DAC2. The tracks taking the signals from the uC's DACs to an opamp that buffers them (UREF1) before going to the multiplexers are the two tracks going from the vias just to the upper right of C712. The DACs are connected with an SPI bus, which leaves from the upper right hand corner of the uC.

The DACs and multiplexers generate control signals for the analog sound generators to the right (mostly not shown), not audio directly. However, I would expect any significant digital crosstalk in them to be also audible in the generated audio, which would be bad. I'm aiming for a \$1\$kHz control rate, which means that the 8 way multiplexers get new sample values at a rate of \$8\$kHz.

Other tracks leaving the uC are:

Any other comments or suggestions are also very welcome, as I'm not a professional EE so I might also be doing silly mistakes here :)

I'll collect the latest version according to suggestions here.

Changes on the top layer according to Armandas' suggestions: 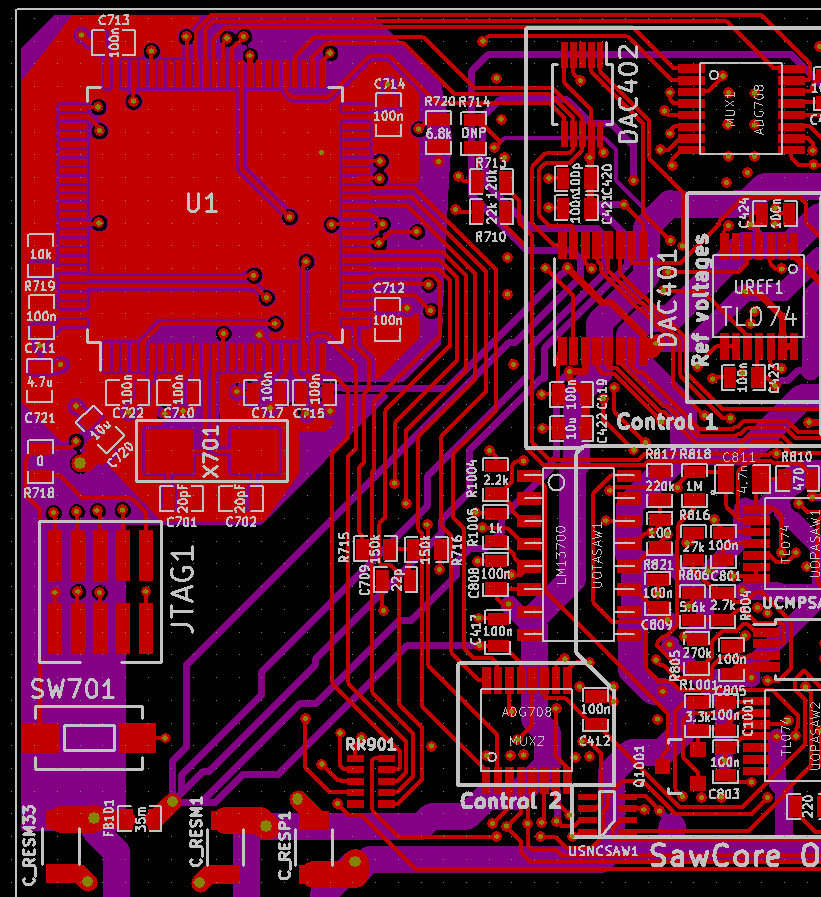 Not the answer you're looking for? Browse other questions tagged microcontroller pcb-design layout dac mixed-signal or ask your own question.

243
Decoupling caps, PCB layout
13
Mixed Signal PCB, 2 or 4 Layer?
4
How to route power in split-plane layout?
1
Microcontroller GPIO in audio circuits
12
Details on PCB layout for microcontroller
1
Where do I put digital ground in a dual-rail mixed signal circuit?
1
How to create a mixed signal pcb
0
Multiple PCB system vs mixed-signal PCB