Adding a gap to a core for an inductor

I'm in the process of designing an inductor for a boost converter, and I'm having a hard time finding exactly what I need for this project. I have found a core size/shape that appears to work except I can only get the core in the material I want (N49) in an ungapped core (s = 0 in the image below). Running the calculations for this core, it looks like with the \$A_L\$ value listed, I will saturate the core before reaching my target design current. However, the core is large enough that if I could decrease the \$A_L\$ I would have a viable design. So I think I want to add a gap to the pre-existing core. 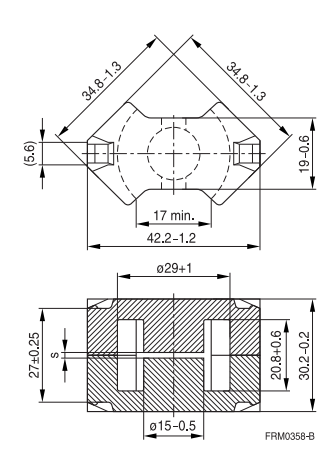 How can I add a gap to the core without compromising performance? I've come up with a few methods listed below, but I'm unsure what is "best".

For the background, I'm trying to make an energy storage inductor for a boost converter operating at higher frequencies (500 kHz), higher current (>12A), and higher inductance (>200µH).

I've always put paper or plastic or other material shims in and I've never hit problems but this has always been on small production runs. Getting the gap dimension is fairly simple too. The basic formula is: -

I know that you want to use N49 material but you can get perfectly good clues about gapping N49 if you look at the table for N41 material: - 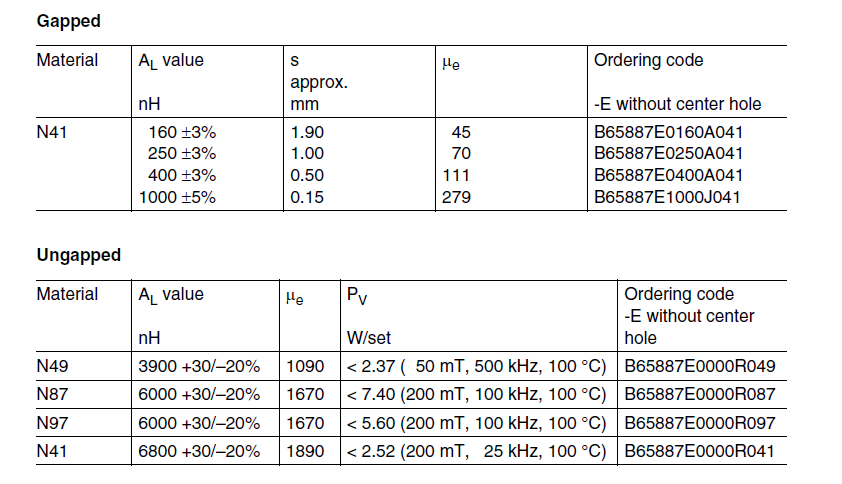 So, for an effective length of 70mm the permeability of N41 (1890) with a 1mm gap becomes 67.5 i.e. pretty close to the number quoted of 70. In fact it's pretty much the gap that defines the permeability now. For instance, if you had a material with a permeability of (say) 1000 and did the math with the 1mm gap, the new permeability comes out at 65.4.

Don't forget that a 1mm gap on the centre limb of the core translates to a 0.5mm gap all round.

So, for N49 material the new value of permeability is pretty much going to be about 65 for a 1mm gap. How does this affect saturation? Firstly you need more turns because the inductance will have dropped by the proportion 1000:65. Inductance is proportional to (turns)\$^2\$ so now, to restore the inductance, you need 3.922 times as many turns as you previously had.

Regarding the sanding down of ferrite - it's very easy to do but a little tricky to measure how far you have sanded down. I've done this once and didn't have any problems other than it being a bit fiddly but you can take off ferrite with reasonably fine grade sandpaper quite easily by hand.

Just insert non-magnetic shim material between the cores. Consequence is that you'll get a bit more leakage of EMI out the sides (flux fringing). You will be adding two gaps so you should use shim material thinner than with a gap at the core post. This is commonly done when prototyping flyback transformers, in fact you can buy special 'spacer' glue to glue cores together. In your case, I suggest procuring a kit of various thicknesses of plastic shim sheets used for mechanical engineering purposes and use the usual spring clip to hold the cores.

It's easy enough to calculate the required air gap for the desired Al. See, for example, Transformer and Inductor Design Handbook, Col. McLyman 1-18~1-23.

Grinding ferrite is not particularly easy to get right, even on a milling machine, at least that's my experience.

Apart from @Spehro's good answer, 3M or 3M-like diamond pads with high grain (1000 for higher speed, higher roughness finish, 2000 for intermediate smoothing, 4000 for preliminary smoothing, 16000 for ultra-smooth finish) on a rigid surface are what I have used to take off as little as 10um +/- 2um from metals and stones in machine prototyping and corner tweaking of compressed metal cores. I have managed to mount a few round ones on spindles to use with the 1 to 10krmp bench drill.

Just to add some to the idea mix.

You can get Kapton, PTFE, PP, PE, Mica and Formica in sheets in many different thicknesses and these days at a bazillion places, so shimming should be a none-issue. Though I'd advise not using Mica or Formica, since they are harder to get these days and a pain to get to size without making sharp shards all over the place.

Pay attention to material softness, though. Some softer plastics can easily compress enough to modify your gap-maths under the spring force of the core.

Last idea I have is, I know, I'm fan-boying again, asking Wurth if they do custom-gapping on samples in the US. And then of course, see if they have a core you can sample that would fit the bill.

In my country the numbers just dont get high enough to justify surface grinding .Also most of the people with those sorts of skills have left .Surface grinding is something difficult to change if you get it wrong .There is the possibility of extra core hotspotting near the freshly ground surface.Now when you shim you effectively have two gaps and the more gaps the less extra losses from fringing fields .When you grind you only have one gap so your fringing fields will be worse than a shim.If you prototype with a shim and go to production with a grind the higher losses could get you into trouble .The bigger the total gap is and the higher the frequency is the more likely there will be hassles with extra losses.Small gaps seem to be covered adequately by the core manufacturers .Sensible things are litz wire which is not welcome from a production standpoint and keeping the wire away from the fringing feilds .Remember from ham radio that you want a high Q coil.ZL4TIY.

This is very close to what I am looking for. In a past life, I worked for Pulse Engineering, building samples of pulse transformers and delay-lines. It was quite common to use gapped (pot) cores which I sealed with Silicone RTV before potting. If the epoxy got inside the core, it would almost invariably crack the ferrite.

Not the answer you're looking for? Browse other questions tagged inductor ferrite or ask your own question.

12
Why do we want gap in the core material while designing inductor?
3
Inductor design tips

11
Saturation current of my inductor not agreeing with formulas
3
Selecting the right ferrite core for high currents
14
Why am I getting odd inductances from home made inductor?
2
Toroidal inductors - Heat Problem
2
Inductor Voltage and Current Phase Delay on a DC Converter
1
Air gap for inductor core
0
Using a ferrite core transformer as an inductor for a boost converter
0
Flyback transformer size vs. core losses
0
Difference between air gap calculation in an inductor with respect to practical measurement