So I'm trying to make a discrete device that functions the same as the highlighted portion of the diagram, which is taken from a Battery Management System chip. 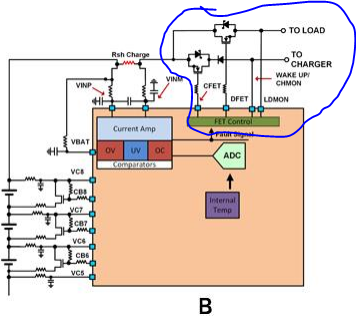 I understand that n-type FETs are used in this diagram, and that the gate voltage must be higher than the source voltage, such that a charge pump is located in the green FET Control box. I also understand that this is a high-side driver, and that a low-side driver might be able to perform the same job with simpler electronics. I've researched both, though I'm having difficulty finding something complete enough to actually implement them. The only functionality I want is to have a separate load and charger lines, which I believe allows for polarity reversal protection when charging. It has to be able to handle up to 40V and up to 10A charging current. The rest of the battery management system is handled by another IC, which unfortunately doesn't have this functionality. Any off-the-shelf parts would be preferred, but I can try to muddle through diagrams with part numbers or search phrases, but I'm a Chemical Engineer by trade and am out of my depth with hardware.

Any help or input would be greatly appreciated.

If you take a look at the symbols of each your discrete FETs there, you'll notice they have body diodes present. If you did not have the CFET, and just had the DFET, while you would stop discharging, you would not stop charging if some kind of charger was hooked up because current would flow through the body diode of the DFET. Having both of them solves the problem, and allows you to have operating modes where you discharge only but block charging, and vice versa.

Now, the root of what you are asking I think is, do I use a high-side or low-side battery switch, and this is a loaded question that involves trade off in the amount of circuitry you wish to use.

First, NFETs vs PFETs. There are tons of differences between the two, but the biggest one I would pay attention to here is the on-resistance, or RDS(on) of the transistor. N-channel devices tend to have lower RDS(on) than an equivalent PFET, meaning they will dissipate less power. I would try to use an NFET for this application, and most folks generally do so.

Next, you correctly identified that a NFET is an enhancement-mode device that requires a positive VGS (gate-to-source voltage) to turn on. When used on the low-side, it does not require any additional driver circuitry because it's on the ground return path. When used on the high-side, you need a driver to generate a positive VGS above the source voltage -- generally done with a charge pump.

You can search this site for questions relating to high-side vs. low-side; I don't want to re-type that here as I can't do the answer justice quickly. Here are some considerations though:

A potential solution is to use those outputs to control the enable pin of a charge pump that doubles the incoming battery voltage -- assuming this fits within the maximum VGS rating of your NFETs, that would do it. Charge pumps are fairly efficient devices, but the addition draw of a charge pump may be more than the additional power dissipation of a P-type device.

I've left out PFETs from this answer intentionally -- yes, you could use a PFET here, but would have to check the following:

Not the answer you're looking for? Browse other questions tagged mosfet driver mosfet-driver fet terminal or ask your own question.