I am using an ATtiny85 to sleep for a long period of time, collect some data, send it over radio, and go back to sleep, after disabling everything possible. The ATtiny is currently powered by a coin cell. I can get quite some time off that coin cell, but it's simply not enough, and the coin cell cannot be changed once the board is deployed.

My aim here is to find an alternative power source for my board. Some good news is that the boards are never more than one or two feet from a receiver, so rf-like power transmission may be possible. Some other options may be motion or heat (it's a wearable device). The amount of power could be pretty small, as I only need it at peak periods, so I could just charge up a supercapacitor for a while and drain it when power is needed after the Attiny wakes up for less than a second.

The ideal situation would be to have a means of power transmission or generation that provides enough current to continuously power the microcontroller without the need for sleep, but I recognize that this is probably not feasible. However, due to the limited range it might be. Another concern is radiation to the wearer.

If anyone has any experience in this kind of power transmission or generation or just any ideas I would love to hear it. Thanks!

Note: I imagine your best choice would probably be a rechargeable li-ion cell though, with respect to overall cost & weight factors.

Enocean have been making energy-harvesting radio light switches for several years. That converts the pressure of switching a light on or off to power a radio transmitter. It allows light switches to be put anywhere without the need for wiring.

Seiko have been making 'self-winding' 'Seiko Kinetic' electrically-powered watches for many years. They claim "1986 [...] was the first watch in the world to convert kinetic movement into electrical energy". It might be practical to do some experiments with that mechanism.

I searched for self powered shoes and energy harvesting shoes, and get several interesting links.

Also, I have seen watches with solar cells, which can generate enough power from the ambient light they receive to keep them running.

Combined with a super-capacitor, or long-life rechargeable battery, should power something for many years.

Edit:
As Seiko watches are profitable, desirable, products, it is feasible that another company has developed a variant of similar technology. If your Chinese is good, or you have access to someone who could help, you might be able to track down a third-party product. Failing that, try to get one cheap second-hand, and try to make a prototype. If your product is interesting enough Seiko might be interested too.

IIRC, the EnOcean micro-generator was developed by a third-party company, I think, German. They might have other products.

Lots of companies are working on energy-harvesting shoes.

Small side note: I think there are microcontroller familiess which are lower energy than ATtiny. So you might want to look at other MCU's, especially ones combined with radio, which may reduce the power requirements.

You mentioned a "wearer", so assuming this powered board will be mounted to a living, moving person?

If so, you could use an eccentric weight like those used in self winding watches to generate a small amount of power. 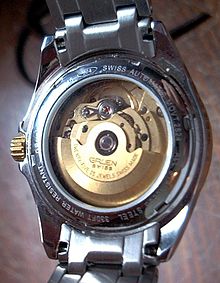 The idea would be to have a magnet that rotated past or though a coil. Each pass would generate a current in the coil, which you would use to charge an on board capacitor.

The power levels generated would be extremely low, so one of the many fine energy harvesting chips would be helpful.

3 high quality AAA batteries in series directly connected to Vcc should be able to power an ATTINY85 running at 10Mhz with an average draw of 5uA for at least a decade of run time. It is probably a good idea to add a large capacitor in parallel with the battery pack to smooth out the high current periods since the batteries will last longer with a smooth, low current draw. 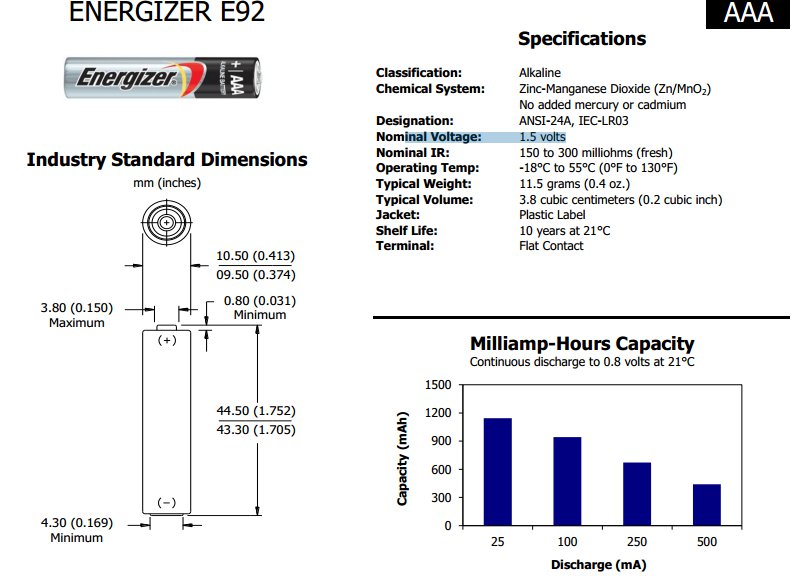 If you use the low voltage ATTINY85V part running at 4Mhz, then you could even get away with 2 AAA batteries and stay within the chip's operating voltage range.

An AAA battery typically has a capacity of >1000mA hours if run down to to less than 1 volt slowly. Newer high quality cells can physically last 10+ years before they start to fall apart...

You could meet your 1"x2" size requirement with 2 N size batteries size-by-side and still have at least a decade run time if you use the ATTINY85V part @ 4Mhz.

I can't comment yet, but got a question: for how long would you plan to have the device running?

In terms of battery I had excellent results with the 3V Lithium CR123A (not rechargeable) or the CR2540, which offers more than double of CR2032. They have 10 years shelf life and very low self-discharge.

Depending on the life expectation for your product, you might find better to combine battery with energy harvesting, which you could combine both using reasonable capacitors.

Another point is how often do you send data over RF? Is that possible to buffer the data to reduce the radio usage? Maybe have you radio to be powered by a capacitor charged by the harvesting, so you can keep collecting data using the battery and only transmit it when there's enough charge on the capacitor.

Also, depending where your device will be used the Piezoelectric Energy Harvesting might be another option.

You can get a Lithium rechargeable cell, the same size as a cr2032 or any primary button or coin cell. The lir2032 is the same size but a higher full charge voltage. These can be trickle charged, or you can use a proper charging circuit. These are used in those cheap solar powered flashlight Keychain.

As for charging, a solar cell would work well. You wouldn't need much light for your purpose.

Otherwise you could use rf coils for power. While in use might be difficult, so a dedicated charger might be quicker.

A direct charge is simplest though. So it would need a charging port, which can be as minimal as two pads on the outside.

How about solar? Well why not ? Very tiny input, but it sounds like your device will spend far more time idle/charging than running. Trickle a few fractions of a mA over many hours into a cap?

Not the answer you're looking for? Browse other questions tagged arduino power rf attiny inductive or ask your own question.

5
Attiny85 hardware interrupt unreliable, 433 MHz remote
4
Battery recharge protection for a dual-power ATtiny board
0
USB lights up simple circuit but not coin-cell
2
How much current is a powered-down ATtiny84 supposed to take?
2
Best method of packet transmission between an array of sensor nodes?
0
High power consumption using two transistor boosters
2
Missed Interrupt Problem with Attiny85
0
Speed of a mosfet triggered directly from the logic pin of an Attiny85?
0
"Normally closed" switch: does it use more power than a "Normally open" for a low-power battery-powered ATtiny project?