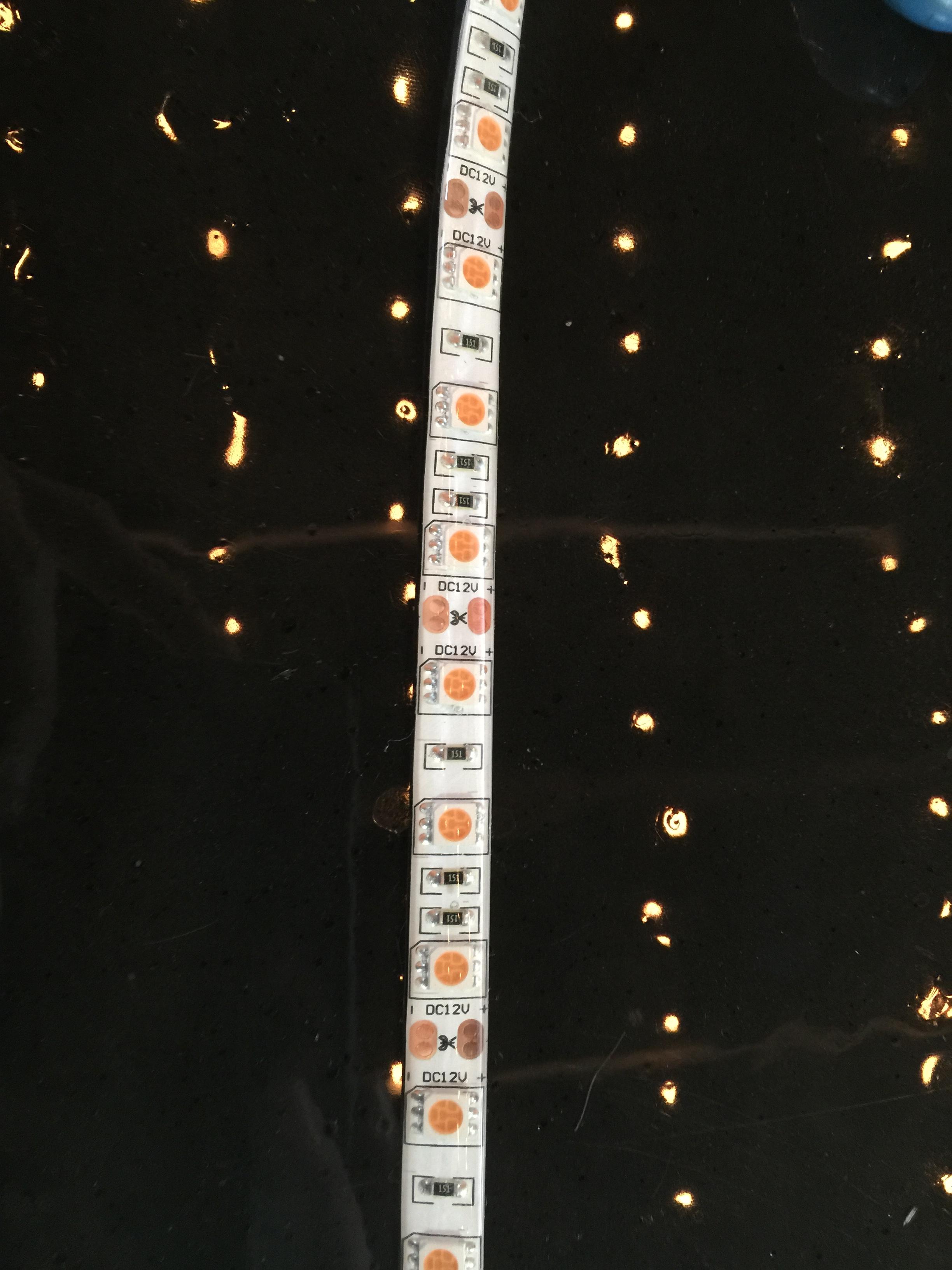 I have been given a purple, waterproof, high intensity (18 LEDs/foot) LED strip. I don't have any spec/datasheet for the LED's because they were acquired directly from a Chinese manufacture.

I can clearly see they are rated for 12VDC but cant find any other data on them. I am trying to lay 7 strips that are 5 feet each in length using one power supply. As of now I am using a 12V, 3A switch power supply that I recycled from an old laptop and the full strip of LED's turn on but they get warm to the touch.

My question is, whats the best way to hook 7 5 foot strips together? Series or Parallel? and how would I calculate the overall power consumption in order to pick a correct power supply? Can I add a 5 watt resistor to each strip and lower the current if necessary?

I have attached an image of the strip.

Most of these strips are laid out in a repeating pattern of three LEDs and their current-limiting resistors along a flexible circuit. There will be scissors marks every 10 cm or so.

Figure 1. Cut along the dotted line.

If it's this type of strip then the LEDs are effectively wired in series parallel along the length of the strip. You can connect the strips end to end but it should be clear from the schematic that you're actually connecting the individual strings of LEDs in parallel.

If you daisy-chain the strips then be aware that the first strip has to carry the current for all the downstream LEDs and the copper may overheat. You've no data sheet so you need to get a feel for what's normal temperature with one strip and add another, etc., until you feel it's getting too hot.

Alternatively wire each strip individually back to the PSU.

If you have a multimeter switch it to 10A DC and plug the red lead into the 10 A socket. Measure the current drawn by one string and work out how many strings your PSU can handle.

The photo arrived after this post. Basic principle still stands but I can see a resistor per LED and the LEDs have six pins. You'll have to figure it out.

Hook up a multimeter as shown in Figure 2. and measure the current drawn by one strip. If using a digital multimeter then be sure to plug the red lead into the 10 A socket, and switch to 10 A range before powering up. The total amps will be the sum of all the individual amps readings.

Your flashing LEDs indicate the power supply has shutdown - probably its thermal protection kicking in.

Plug your red lead back into the V socket before you finish. If you forget and hook it up to a battery, etc., a high current will flow, blow the internal fuse and possibly damage the internal shunt resistor.

Not the answer you're looking for? Browse other questions tagged power-supply led-strip or ask your own question.