This is a follow-up question to (this question).

Here is the amplifier section in question: 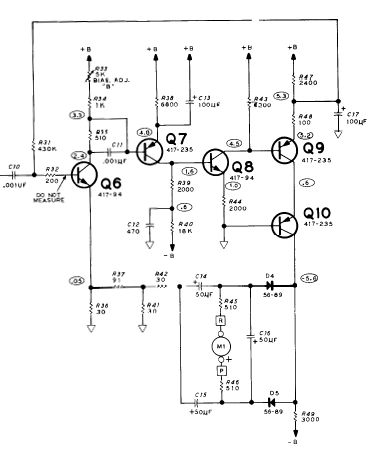 In the answer, the author (@Brian Onn) gives the following explanation:

"Slow vs. fast is not about the gain of the circuit. The feedback is going to be "fast" when it has high enough bandwidth."

I thought I understood this at the time, but after investigation (and it's hard to find any direct references), I realize I don't. So, the comment warrants its own question.

Here's a brief summary of what I understand so far:

1) The input to the feedback amplifier (meter driver) is the output of the bridge. It'll be a phase altered AC signal of various amplitudes when the bridge is unbalanced and a signal closer to DC when balanced.

2) There are two feedback paths in the amplifier (one for AC and one for DC). Each path effects the gain of the amplifier differently. The design objective (as Brian points out) is to make the tracking "snappier" when the bridge is unbalanced and less so as the bridge approaches a balanced state.

3) Negative feedback reduces the gain and broadens the bandwidth. I understand this well enough.

But, what I don't understand is how a change on the input to the amplifier can result in a slower or faster response (from the output) depending on the bandwidth.

I see difficult mathematical references to step response and slew rate and my feeling is that this is where the answer lies. Can anyone provide a more "intuitive" explanation?

I don't understand is how a change on the input to the amplifier can result in a slower or faster response (from the output) depending on the bandwidth.

What you have to realize is that all bandwidth limited circuits (and that is basically all practical circuits) exhibit delayed response from input to output. A circuit with a very low bandwidth will take longer to respond than a circuit with a high bandwidth. Why ? Because the circuit with the low bandwidth has large time constants internally which delay the signal.

But there is more. Suppose we have two circuits, with the same gain etc, only their bandwidths are different:

circuit A has a bandwidth of 1 kHz

circuit B has a bandwidth of 1 MHz

Now we apply the same sinewave signal of 1 Hz (that is one Hertz) to their inputs.

What will we see at the outputs ?

Now we apply the same sinewave signal of 10 kHz to their inputs.

What will we see now at the outputs ?

Think about it before reading any further !

For the 1 Hz case the outputs of circuits A and B will be identical. Their bandwidths are much larger than 1 Hz so that signal is unaffected, not delayed etc.

But for the 100 kHz case the signal at the output of circuit A will be attenuated significantly but not so for circuit B. Circuit B has enough bandwidth, circuit A does not.

Now take it one step further, we apply a step function to the inputs of both circuits. A step function is a signal that changes it's value suddenly from one moment to the other. If you would perform a fourier transformation on a step function you would find that it is the combination of an infinite number of frequencies. So it contains all ! Including the 1 Hz, 100 kHz, 1 MHz, all of them !

Now what will we see at the outputs of circuits A and B ?

At the output of B we will see all frequencies up to 1 kHz, the rest is attenuated.

At the output of circuit B we will see all frequencies up to 1 MHz, the rest is attenuated.

Any signal in the time-domain you can think of can be represented also in the frequency domain. Slowly changing signals consist of low frequencies. Quickly changing signals must contain high frequencies, the lower frequencies are optional. This time-domain vs frequency-domain representation of signals is done by fourier transformation. Most of us are familiar with time-domain representations of signals, like on an oscilloscope but you can also measure and represent a signal in the frequency domain using a spectrum analyzer.

Using an inverse fourier transformation you could reconstruct the signal in the time-domain at both ouputs. You would then find that the signal at output B responds earlier and changes faster to the step function at its input. Circuit A is slower so the signal at its output will start later and it will be less steep (less change over time).

Not the answer you're looking for? Browse other questions tagged amplifier feedback gain bandwidth or ask your own question.

0
Transistor Based Amplifier and DC Only Negative Feedback

2
Transimpedance amplifier bandwidth
2
Working with current feedback opamps [CFA]
2
What physical factor affects the antenna's bandwidth?
1
Big loop gain vs. big bandwidth
2
What is the relationship between feedforward control and bandwidth?
0
How to calculate closed-loop bandwidth from open-loop parameters using feedback factor
4
Phase shift near saturation mitigation in input stage amplifier — How does this work, why does this work?
2
Finding value of feedback capacitor in a photodiode amplifier
2
Why do current-feedback amplifiers have a higher bandwidth?