Design challenge: Detect finger-to-finger touch with nothing in between

I'm trying to build something quite challenging and seem to be getting nowhere. Maybe you'll help. I'd like to detect a touch of two naked fingers with no materials or sensors in between (simple capacitive sensors won't work here). It's a design idea and I'm not very skilled engineer so I have no idea if it's even possible.

Here's a simplified sketch of a hand: 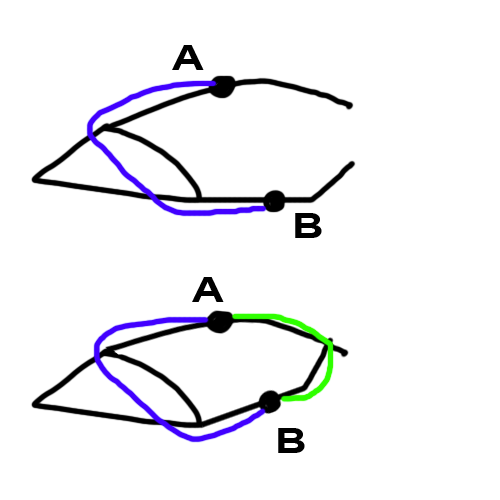 The original idea was this: There's an electrode on each finger and small current is running through from A to B. When fingers touch, current starts passing through the SHORTER GREEN path as well (it may not be apparent but it will be always a shorter by at least ~1cm). But it turns out looking for changes in resistance / current seems to be going nowhere. It's not reliable because the biggest changes in resistance come from contacts between the skin and electrodes. It won't ever be perfect, electrodes move, user sweats, temperatures change, etc. Compared to this, the changes in resistance caused by a shorter path are insignificant. But the contact may be good enough for something else (it would be fine for a simple capacitive touch switch).

I'm now thinking that maybe I could measure the distance between the two contacts somehow by sending some signal from A and reading it at B. Just looking at the time of propagation of charge imo won't be possible because I won't be able to do this fast enough to get at least a millimeter resolution.

The problem could be really described as detecting whether the shorter green path is being used or not.

(We could add more electrodes on the fingers somewhere along the blue path but not along the green path.)

Do you think something like EDM (http://jerrymahun.com/library/Distance/a.htm) could help here? Any other ideas?

You could do this with three electrodes on the fingers. Two would establish an excitation and the third would be an input to determine if current is flowing down a finger. Conceptually, something like this: 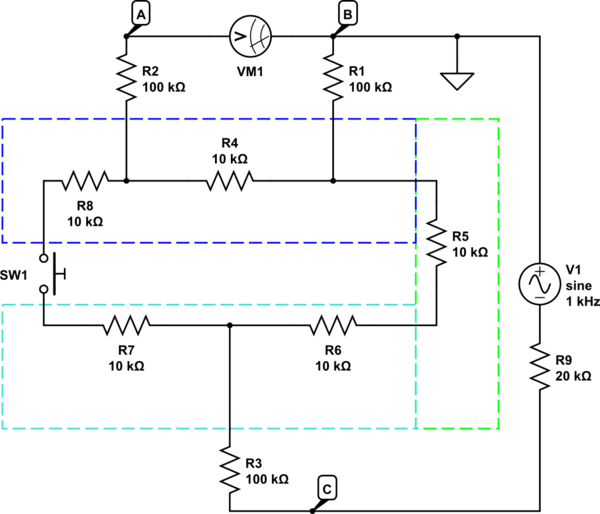 In this case, V1 is a low voltage AC source, preferably of a frequency much higher than mains frequency so that mains hum can be filtered out and sufficiently low voltage as to not cause problems with the skin or safety in general. R1, R2 and R3 represent the electrode-to-skin impedances (I think that's roughly right for EKG type electrodes). The 10K resistances represent the impedance of fingers and hand.

There are potential dangers associated with anything connected in this sort of way to a human body, and this answer does not attempt to address those issues. Probably if power is supplied solely from something like a 3V CR2032 battery (no mains connections or adapters or power supplies or computer connections other than wireless) some of the issues will go away, but this aspect requires careful evaluation by someone familiar with the proposed setup and biomedical safety issues.

Not the answer you're looking for? Browse other questions tagged voltage current frequency measurement capacitance or ask your own question.

7
Is a human (or other) electrical signal absolutely necessary to activate a capacitive touchscreen?
8
Will this approach accurately measure capacitance and infer spacing?
1
Capacitive touch insulation problem?
1
How and when does the kelvin measurament actually works?
0
Test grounding of wall sockets
1
How to detect which pins on a pin display are touched using capacitive sensing
2
How exactly does the Apple Pencil work?