I have 300 LEDs that I want to animate. 100 in group A, 100 in group B, and 100 in group C. Group A will be on all the time. I want to blink/alternate between group B and C. I'm a software developer and new to electrical engineering so I'm not sure how to power that many LEDs. I know I would need 200 x 20mA for 4A or potentially 6A if all the LEDs are on when it's transitioning.

How would you do it? One big power supply? Microcontroller, yes/no? Multiplexing?

You could raise voltage and decrease current by putting several LEDs in series.

The whole group can then be switch with an N-channel MOSFET driven by a microcontroller. When pin is low, LEDs are off, when it is high, they are on. (High = well above FET's gate threshold voltage, but that is usually around or below 1V for the FETs that are rated for 1-2A.)

If you have 3 pins on the microcontroller for this, you don't need to multiplex. 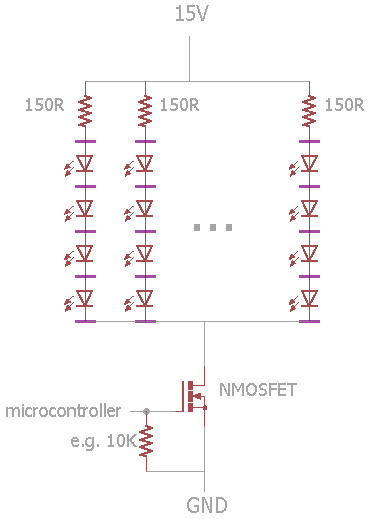 Not the answer you're looking for? Browse other questions tagged microcontroller power-supply led or ask your own question.

3
Will my Arduino output pin at 0v handle 25 LEDs cathodes
2
Multiplexing large LED matrix
4
Creating a “Sharp” Turn on for LEDs
3
Blinking an arbitrary number of LEDs in succession
2
Connecting nine LEDs
1
Drive multiple LEDs ON together using PIC Microcontroller
0
Powering 5v LEDs with 6 or 12 volt batteries
0
Wiring 3v 20ma LEDs
1
Can I use 2 Power Supplies in series like this?