How can I adapt a 3-pin PC fan connector to a 4-pin connector?

My computer's motherboard uses all four pin fan connectors with no support for speed controlling the older three pin fan connector. The problem is, all the PC fans that I have use a three pin connector. As fan as I know there are no premade solutions available, so I was thinking of building an adapter that sits in an unused drive bay.

I can't seem to find much information on how the four pin fan connecter works. Apparently, it looks something like this:

Could I simply use a logic level MOSFET to do the following?

You can just plug it in, the connectors are designed to be compatible. the fan will only run at full speed, that may or may not be a problem.

if you want variable speed that's obviously not a suitable solution.

using the PWM signal (which is is probably only 0-3.3V) to switch a mosfet probably won't work well, and if it does work the fan will tend to stick on some harmonic of the PWM frequency instead of following the PWM ratio.

a better approach is is to use the PWM signal to control the set-point of a voltage regulator and use the regulator output to power the fan, thus controlling it speed. 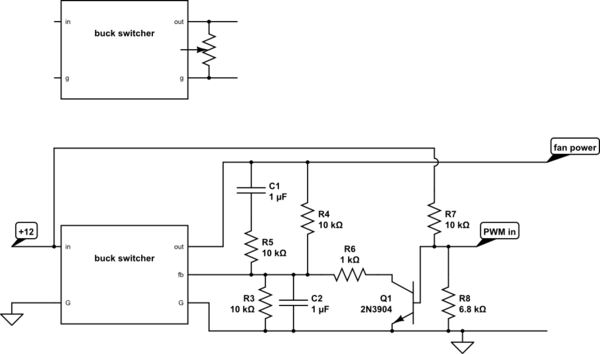 here I show the potentiometer on a typical adjustable LM2956 buck converter module and then the same module with the potentiometer replaced with a PWM control circuit. it works by the PWM controlling the discharge speed of C2 and thus the bias given to feedback signal.

This solved my problem: 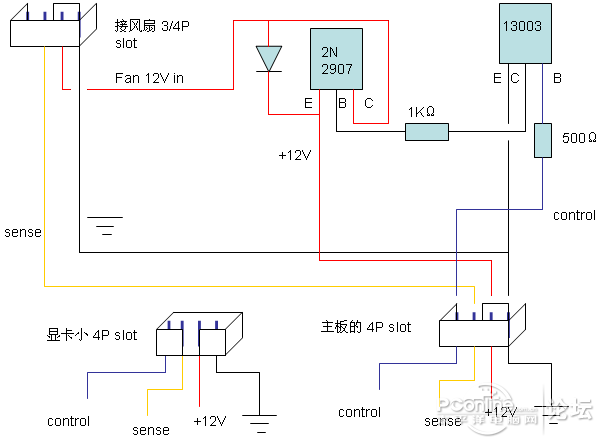 All these stuffs are easy and cheap to buy, enjoy..

Most 3-pin fan controllers control the fan by varying a DC voltage across the fan. This basically means that there is a PWM circuit (most likely) inside that controls a (discrete) buck regulator that brings the voltage down. The fan stays on permanently and has a functional tacho output.

You CAN control a 3-pin fan with PWM on the power pins as well (but not as you have drawn - this is not how a P-MOSFET will work), but be prepared to sacrifice the tachometer function. After all, if you cut power to the fan there is no way for the fan to pull down (it's an open collector/drain output) the tachometer pin. Therefore you get the tacho signal interleaved with the PWM signal, resulting in a garbaged tacho output.

4-pin fan controllers hand off the PWM signal to the fan itself, and these fan controllers supply an uncontrolled a 12VDC. This is probably why they are not able to speed control your fan. 3-pin fans will power up at 4-pin connectors, but only at full speed.

This should work correctly : 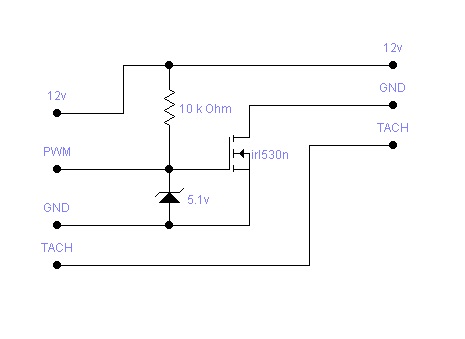 12V is permanently connected, ergo, you will have correct RPM readings. You need a 5.1V Zener Diode, different value for resistor and positioning and uses a n-Mosfet.

This is rather old question, so I wanted to give a brief update for the folks stumbling upon it now. Note, that this is not an answer per se, since it does not work for everybody, unlike other answers here.

While answering similar question, I've stumbled upon the notion of motherboard support for both 3-pin and 4-pin fans. So, if you have one of the newest boards, before you start soldering any adapters go check BIOS settings - it just might have everything you need already.

Not the answer you're looking for? Browse other questions tagged mosfet adapter fan motherboard pc or ask your own question.

0
Can I somehow control a PSU-powered fan using a 4-pin fan output on the motherboard?