Why does this simple FET circuit behave this way? 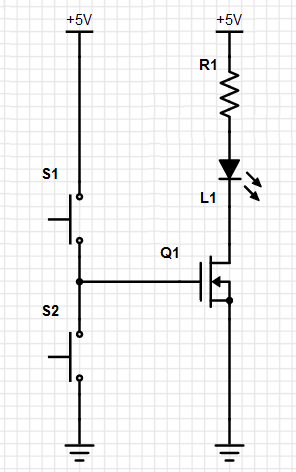 In the circuit above, when S1 is pressed and released, the LED turns ON and stays ON. Why is this so? I can't directly measure the Gate Voltage with a DMM since connecting the DMM results in the LED not staying ON.

If the LED is ON (S1 pressed then released), when S2 is pressed and released, the LED turns OFF, as expected.

I skimmed my intro ECE book chapter on FETs and it didn't seem to mention anything about this phenomenon...

The gate of a MOSFET has a very, very high DC resistance. For all intents and purposes, it basically doesn't consume any current at all if it's just sitting at some steady-state value (we're talking femto-amps or less).

Also, MOSFET gates all have 'parasitic capacitance', which is essentially a couple of little tiny capacitors (usually a few pF) that connect the gate to the drain and the source.

When you press switch S1, you let in a whole bunch of charge from the +5V rail, which turns on the MOSFET. The trick is that it also charges up the gate's parasitic capacitors. When you release S1, all that stored charge has nowhere to go. It doesn't get consumed by the MOSFET's gate (since the gate doesn't consume any current), and also doesn't have any path to get back to ground.

Since the charge has nowhere to go, it just sits there and maintains +5V on the gate until you connect something else (such as S2 or your multimeter) and provide a path for the charge the take back to ground.

Not the answer you're looking for? Browse other questions tagged led fet or ask your own question.

3
PWM & NUD4001 LED driver
0
Single switch circuit to turn on/off an LED
0
Understanding simple circuit with two transistors and one led
1
Why wouldn't my latching switch circuit turn off?
1
Diode meter of my DMM does work for red LEDs but not for white LEDs
0
Trouble with PUT circuit experiments in Make: Electronics