I have a pellet stove motor that cycles on when an external potentiometer is dialed on. The run/on time period for the motor is always fixed--about 5 seconds, and then it pauses for a period controlled by the pot. But how? The "off" time varies, according to the pot dial position. I'm a learner so I cannot visualize what is happening inside the timer. From the symbols on the face of the timer, there appears to be two TDRs at work in the timer. I understand a pot changes the R, but how does this translate to shorter or longer "off" periods. Could it be that greater R means less current to pull a relay, thus delaying its ultimate closure? All thoughts most appreciated. Scott

So if the potentiometer controls the resistance, it will also control the time delay in a linear relationship.

This RC time constant is the amount of time the circuit takes to charge up to 63.2% of its final value. A circuit will typically use some sort of comparator to compare this varying voltage to a fixed voltage, and end the "off" timing period.

In your case, there would be a second fixed resistor that controlled the "on" period (or the variable one might control the off period, and the other fixed one control the overall period, on+off). The two resistors could share the same capacitor, or use separate capacitors, depending on the circuit. It would toggle between the two using a flip-flop or equivalent.

Imagine a 555 timer circuit as so: 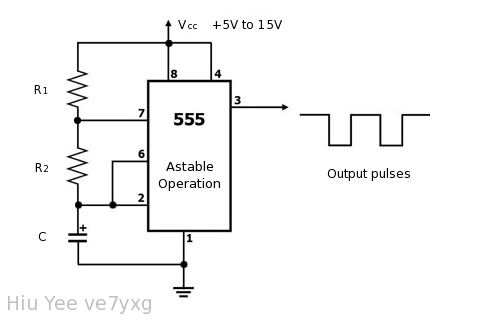 You can try the calculator at the above link to play with resistor and capacitor values. You would start with the range of timing required for 'OFF' (high) time to find the pot and C value, then pick the series resistor (minimum OFF time) and R1 (fixed ON time). If the off time goes up to maybe 30 seconds try something like 22uF, 47uF or 100uF.

Of course there are many other ways of doing this, from using multiple timers to feeding the pot wiper voltage into a microcontroller and having it calculate and time the on/off times, but the above is a simple one.

There are two general approaches to build a circuit that does this. In one, a current which is controlled by the pot charges a capacitor up to a fixed voltage. As the pot changes, the current changes, and so the time it takes to get the (unchanging) fixed voltage changes.

Alternatively, a fixed current charges the capacitor, up to a threshold which is determined by the pot. As the pot changes, the threshold changes and so does the time.

The 2nd method allows the time to be directly proportional to the pot position which may be desirable in some systems.

0
How can I establish “frontiers” in the feedback resistor of an inverting opamp config, if I'm varying it with a pot?
0
Can a trim-pot wiper or contact point gets oxidized over time?