Reactive Power in the circuit

Both inductor and capacitor consume apparent power so I guess total reactive power in the circuit should be written as.

but in books it is

I do not understand this. Can anyone help me on this ?

Anyone can give a good analogy to understand this concept ?

'Both inductor and capacitor absorb power' - NO

They both store energy (the integral of power).

In an AC circuit, a simple one where there's only one capacitor and one inductor, doesn't matter whether series or parallel connection, one will be accumulating energy while the other is discharging energy. One will be taking power, the other will be generating power.

The net change in total energy storage seen at the terminals will be the algebraic sum of the changes at the L and at the C. As one is the opposite sign to the other, the sum is the difference in their magnitudes.

The best example I can think of is a capacitor in parallel with an inductor fed from an AC voltage source of a very specific frequency. When the frequency is chosen so that the magnitudes of the reactances are equal, there is zero net power delivered by the AC voltage source.

This is also known as a parallel tuned circuit and it is well-known for producing infinite impedance at resonance. Infinite impedance means no power can be delivered to it and it takes zero current. Here is an example: - 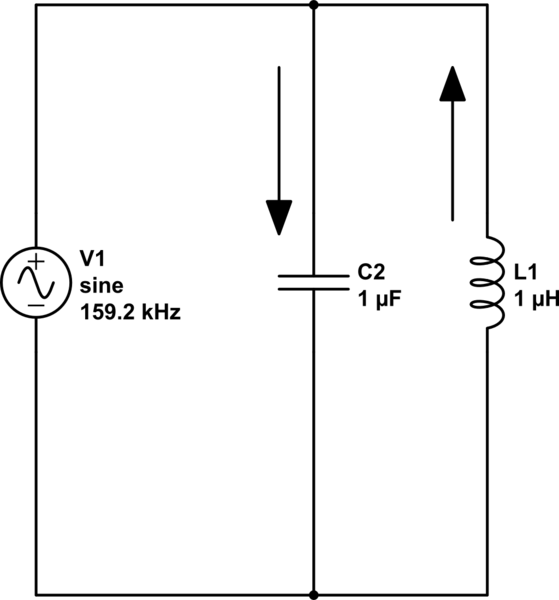 Another example is the series resonant LC circuit. At series resonance, impedance is zero because the impedances of L and C are equal in magnitude but opposite in value. Because series impedances add, any two values that "add" but potentially produce "zero" MUST mean that the inductive reactance has an opposite "sign" to the capacitive reactance.

Because it has imaginary part, apparent power (S) is a vector sum of real power (P) and reactive power (Q). S=P+jQ. Inductive reactance has positive imaginary sign Xl=jwL, while the capacitive reactance has negative sign Xc=-j/wC. If both reactances are equal, then they cancell each other.

Not the answer you're looking for? Browse other questions tagged power circuit-analysis electromagnetism or ask your own question.

1
Calculating reactive power (Q) sign
0
Operation Of LC circuit
0
A question about reactive power through a capacitor in LTspice
2
Can a purely reactive element exhibit resistive properties?
1
The equivalen reactance of an inductor and a capacitor
10
What does the value of reactive power represent physically?
0
Effect of Reversed Phase Polarity on Active & Reactive Power of 3-Phase System?
2
Power Factor in Switched Circuits
2
Is the association of useful work to active power a convention?