I am trying to bit banging an UART Port using PIC32MX with timer5 (the only available at this time) but I am struggling how to configure the timer for a Baud Rate of 115200bps. I don't want a flow control not even to deal with parity bit. If possible can someone explain me on a Step-by-step procedure?

By now I think I just need to configure the T5CONbits.TCKPS and the PR5 register in order to synchronize with the baud rate, right? 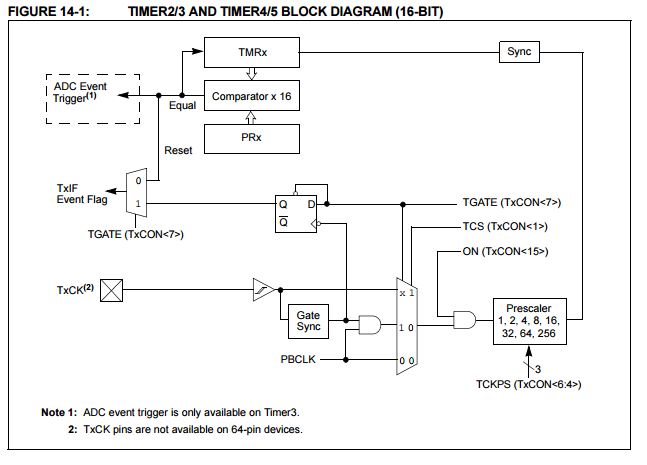 I really need your help on this guys.

For both sending and receiving, you need to set up a timer interrupt.

The number of counts for the timer is then:

So transmitting is easy, just set up a counter, and on each interrupt output the start bit, followed by 8 data bits, followed by a stop bit which lasts two timer intervals.

Receiving is a little trickier. To catch the falling edge of the RX lead, indicating the beginning of the start bit, you could use an Change Notification as you mentioned in a comment. Or, if you have an interrupt pin (INTx) unused, you could use that instead.

When the Change Notification interrupt comes in, you then want to reset your set your timer for one half the period, i.e. 4.34 µs, or 208 counts. Then, when the timer interrupt comes in, you should be in the middle of the start bit. If it has gone back high, then this was just noise. Otherwise change the timer back to one bit time (8.68 µs), and on each timer interrupt you will be sampling the middle of each data bit.

Ideally, you would like to scan each bit more than once. So if you set your initial timer after the Change Notification interrupt for 3.34 µs (160 counts) instead of 4.34 µs, you will be sampling the middle of the start bit minus one µs. Then wait 1 µs and sample again (you are now in the middle), and then once more (1 µs past the middle). You now have three samples to look at, so you can take the majority value. Wait 6.68 µs (321 counts) this time and repeat for each data bit.

You might want to get the simpler version working first (scanning just once in the middle).

I don't believe your setup is correct. The second line of your listing assumes your peripheral clock is 48 MHz, but looking at your clock setup, I think you are only running at 8 MHz.

Without an external crystal, the only way to get above frequencies of 8 MHz is to use the PLL. However you have the oscillator selection set to just FRC, which uses the internal 8 MHz oscillator directly. To get 48 MHz, you would need something like the following settings:

I don't know what the SYS_FREQ #define is being used for. Seems it should match GetSystemClock.

Not the answer you're looking for? Browse other questions tagged microcontroller pic timer interrupts microchip or ask your own question.