A question about negative dB in LTspice 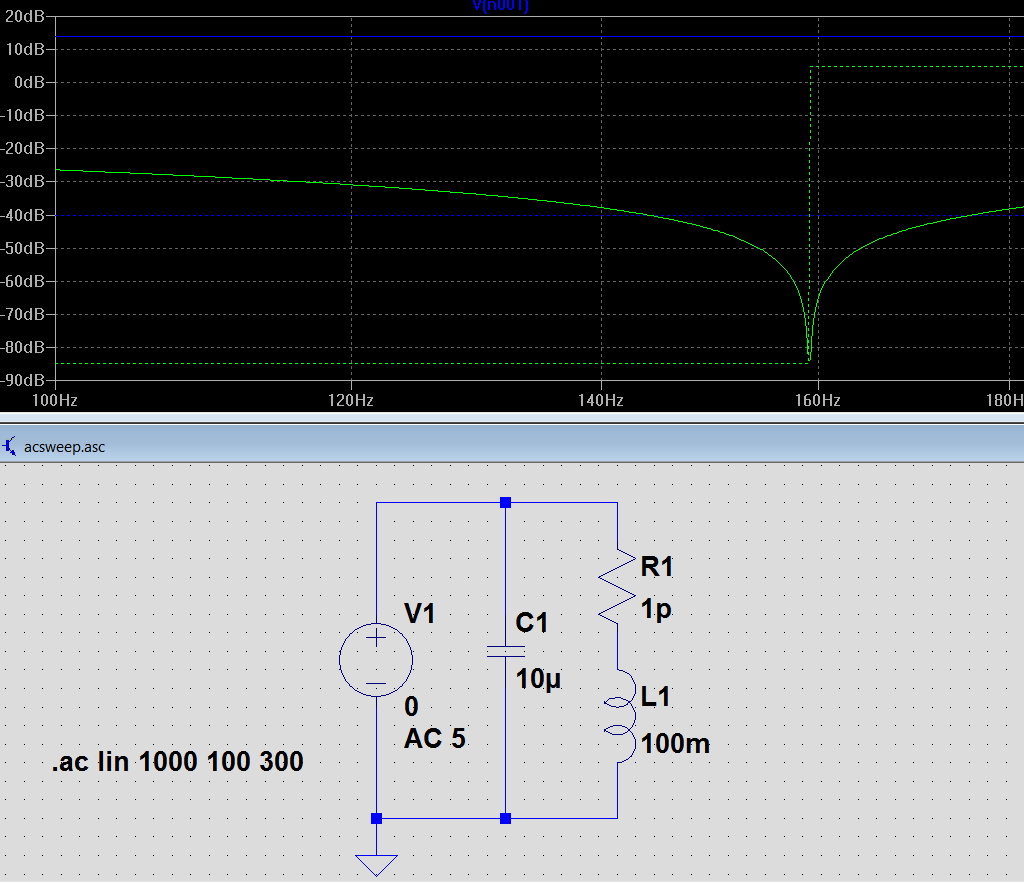 Above is a screen-shot from an LTSpice simulation. It is a freq. response of an LC tank circuit with a 5V sinusoidal AC source.

But the current is plotted in negative dB. Why is that so? What does -dB mean here for the current? is that something to do with reference current in 20*log(I1/Iref)?

What does -dB mean here for the current?

So when you have decibels for current as the Y axis then it is implicit that they the Y axis is dB relative to 1 amp (or dBI).

One further thing to consider is that the graph may be plotting peak current and peak current is \$\sqrt2\$ times bigger (for a sinewave). Read the LTSpice help advice to know exactly.

Sure, dBV are used and this is quite common and one website I visited compared decibels for current and voltage by calling them dB(volts) and dB(amps) - maybe "dBI" just isn't used so as not to confuse folk with dBi?

The decibel scale is a relative one, i.e. you can't really express a value \$x\$ in decibels, rather you always take something like \$20 \log(\frac{x}{x_0})\$ for some fixed \$x_0\$. For the usual scales we use, there is a well defined reference \$x_0\$ such as for \$dBm\$ is logarithm of power divided by one milliwatt, or dBSPL is the logarithm of sound pressure divided by 20 microPascals.

LTSpice doesn't know which reference to use, so it apparently always refers to one unit of the corresponding SI unit. So in LTSpice dB for voltage is \$20 \log (V/1 \mathrm{volt})\$ (which by the way gives exactly the value you report for 5 volts). Correspondingly, the current is referenced to \$1\$ ampere, so the dB values are \$20 \log(I/1 \mathrm{A})\$. These tend to be negative, since you don't usually have one ampere currents running through LC circuits when fed with 5 volts.

This is actually quite clumsy, since one is often interested in transfer functions, which should be referenced to the amplitude or power of the input signal. The only workaround I've found is to always plot a formula where I explicitly divide by the input amplitude, instead of plotting directly voltages in the simulation

0
What does a circuit's frequency response in dB refer to?
-2
please explain the (default) Y-axis units in LTspice

4
Why am I getting negative base current in LTSpice simulation?
1
Measuring Input Impedance of Transistor with LTSpice
0
Obtaining dynamic resistance of a zener diode in LTspice
2
Questions about modelling a typical crystal radio and simulating in LTspice
0
Basic Capacitor Question To help Cement My Foundation Properly (LTSpice)
0
Confusion with Bode plot in LTspice when using a voltage regulator
2
LTSpice simulate log amplifier
1
dB scale in LTspice
1
LTSpice, plot a current–voltage characteristic