Can I use a 5V phone charger to run a device which expects 3.7V battery power?

I have an old mp3 player which originally ran from a 3.7V LiPo battery. It could be charged from USB using a mini-usb connector. The device goes into charging mode when power is present at the usb charging port, but will not operate in playback mode without voltage at the battery terminals. The battery is long dead and I removed it and soldered a connector to the battery input of the circuit. Using an adjustable regulated supply I can run the device by supplying 4.25V at where the battery used to be (the battery indicator shows "full" at 4.2V and "low" at 3.6V) or from 3 AA batteries, however I would need a smaller wall-plugged power source for practical (stationary) use. I tested the device using a smartphone charger and ran it briefly (2 minutes) with no apparent problems. The measuered voltage was 4.85V. I would need some advice on the following:

Here is an image of the player's internals:

The square IC is marked M7103A-A1, however I could not find a datasheet for it. The rectangular IC's markings are unreadable. The cable in the lower right corner is where the battery used to be. The charging port is on the lower left.

The main risks in this include, but are not limited to:

What can you do? Simple!:

That schematic is very complex for the purpose, but I thought I'd add in a few inductors and capacitors by way of "proper design" to take out some possible noise sources, since one reason they may have decide to not be able to play music when charging is that cheap adapters cause a lot of icky noise that may influence your playback, even only intermittently.

These solutions aren't a be-all and end-all for noise problems, but they will definitely help and should be doable with relatively cheap components.

But, if you don't care about noise, you can probably do with just this: 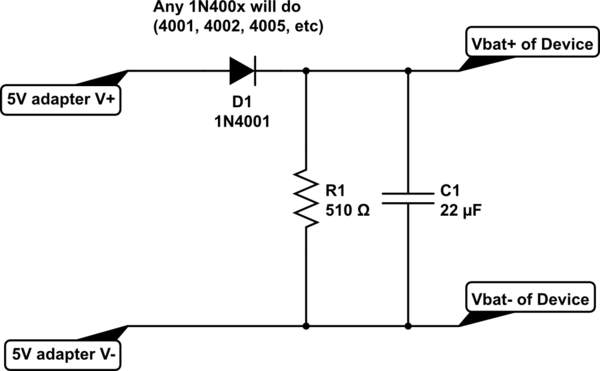 The diode is a "lossy" component and an old-fashion silicon PN type like the 1N4001 (which is also dirt cheap due to massive production numbers) will take up about 0.6 to 0.8V in the forward direction when some current goed through.

To make sure always a little current flows, the resistor is there and the capacitor is just there to smooth out any small disturbances in the... voltage. Ahw. Only just not put in the quote. Couldn't do it guys, sorry.

Edit: Inclusion of the answer to the question "Why the resistor?" in comments:

Asked in the comments: "Why that resistor 'to always drain a little current'?"

The Answer I gave:
Because you do not know how the device works and at times of inactivity a battery powered device may very well drop to several uA or less of current usage, in which case the diode will no longer be strongly forward biased and the dropped voltage will not be fully reliable anymore. The resistor can probably be increased to 2k or even 5k to equal the static (quiscent) waste in an affordable linear regulator.

Secondly with no resistor a turn on/turn off spike of the adapter with the chip only using 1uA can charge up the capacitor to 10V or more for extended time with cheap adapters. Some 'more affordable' adapters can as a death throw when the mains voltage runs out, or even when it is first plugged in, create a small, low-energy pulse that goes outside their normal regulated voltage. If a device is draining a few mA or more, those spikes usually cannot manage to cause more than a volt above regulation for a short bit of time. But when the device drains nearly no current, that energy may go into over-charging your filter cap beyond a mere volt.

Your question is impossible to answer without detailed knowledge of the design. Heat is not the only thing that can kill devices in this situation. Voltage can too. Fire hazard is very unlikely here, though. If you care about your mp3 player, find an adapter that outputs in the battery voltage range that you have identified, or put a V regulator in series with the supply, to give you the ~ 4V you need. If you don't care too much, try it and see what happens. It may work fine.

Not the answer you're looking for? Browse other questions tagged power-supply voltage dc or ask your own question.

3
How to improve load transient response of an LM317 voltage-regulator powering an audio amplifier?

3
Are USB hubs that backfeed power upstream bad?
0
Stabilize a 12V DC supply (from Lipo)
0
Portable phone/device charger
4
Power a circuit off USB the correct way
0
5v/1A input instead of 3.6V/900mA input
0
Voltage Detection via Analog Comparator
3
What is the easiest (least complicated) way to emulate a “short” button press that pulls a pin low?