How to change polygon clearance in Altium

I have tried setting the design rules, but to no avail.

How do I get polygon to automatically leave 1mm clearance when one of the two nets is Vin? 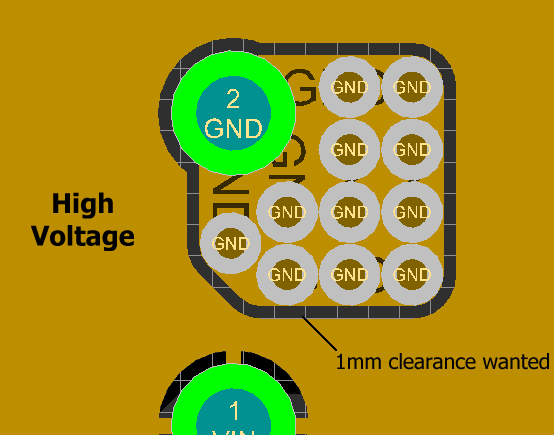 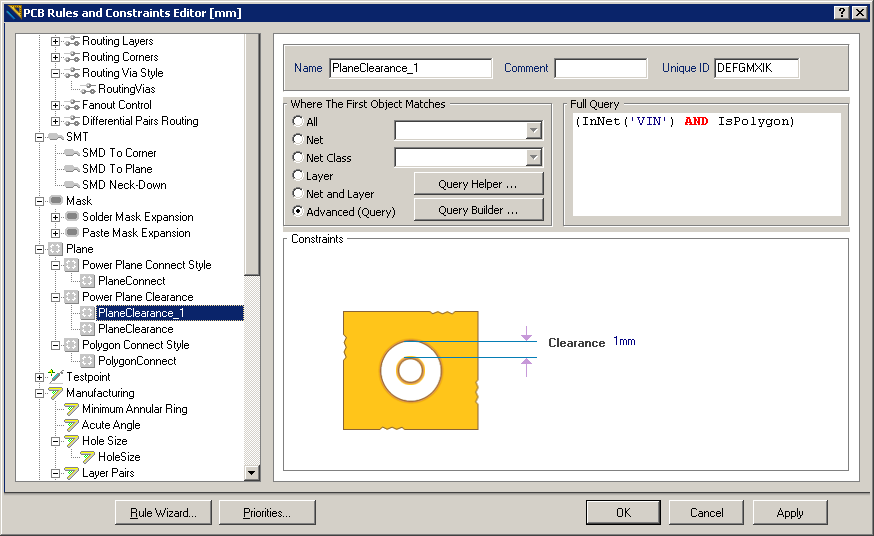 Polygons in Altium are tricky.

The solution to your problem is to use the rule InPolygon instead of IsPolygon.

As I understand it, Altium treats polygons as kind of a "meta" descriptor, internally. A "Polygon" object contains the polygon outline. The outline itself is matched with the InPolygon rule (which is what you want).

This is of course made far more obnoxious by the fact that IsPolygon is a valid rule token, so your rule will seem to be correct, and even pass the rule-checker, but silently fail when you try to actually repour the polygon, since the IsPolygon rule matches against something else.

Also, from your included image, you are trying to make a Power Plane Clearance rule affect a polygon. I think you may need to change that to a Clearance rule (Under the Electrical grouping in the rules window, since Altium's polygons are not planes.

This is off the top of my head, ATM. It's been a while since I needed varying plane clearances in Altium

Don't ask how long it took me to figure this out myself....

Oh, as an aside, placing polygons over polygons can have interesting effects, since which polygon is held-back due to the rules is dictated by the pour order. Subsequently, if you modify your layout, and run a command like Repour Violating, your can wind up with your polygons in a odd state, where a subsequent full Repour will change the overall polygon outline, even though the polygons already were passing the design rules.

If the gap between your Vin net and anything else needs to be 1mm, just put InNet('VIN')
Make sure the rule is higher in priority than any default rule. The polygon should go green (as it flags it being too close), then repour and the clearance should now be 1mm.

Otherwise create a seperate room over the wanted area and use validations for your (top? bottom?) layer and that room (InRoom I believe), and the clearance higher.

Not the answer you're looking for? Browse other questions tagged altium clearance or ask your own question.