I have built a simple amplifier circuit using a EM11G LM 386N-1 amplifier chip which follows the following design (cap and resister values are slightly different):

I connected this mic to the circuit, and the circuit produce some good sound in a pair of headphones:

After this mic was damaged, I tried to replace it with this mic:

I connect it so that the left and right channel are connected to the 'input' and the ground ring is connect to the common ground.

The new mic does not work in this configuration. The sound that should be picked up by this mic is not coming out of the headphones, not even slightly. If I listen closely, I think I can hear a faint radio station, but that's it. I know that the mic is working because I plugged it into a voice recorded and tested it. No problems.

Is there something that the voice recorded is doing differently to cause the mic to work? How do I need to change the circuit so that the mic will be heard?

Edit: Would adding a preamp like this (between the mic and 386N) possibly correct the problem? 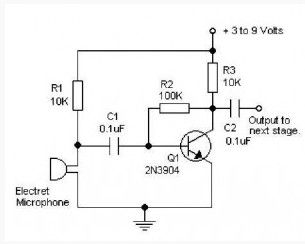 The first mic appears to have an integrated preamp, which presumably amplifies the microphone level signal (very low amplitude) quite a bit, giving you something closer to a line signal, which then drives the 386.

As for the second mic, note that one of the reviews seems to indicate that the microphone is an active microphone (and therefore requires a power source) but does not come with a power source. It is expected to be connected to a device that provides power. It might need a few volts, it might need full phantom power, or it might need some bizarre arbitrary voltage supply.

Alternatively, you might have shorted it or otherwise miswired it, because there is nothing that says a microphone will have the same connection scheme as a pair of headphones. Unfortunately, there is no standard for wiring a microphone to a 3.5mm jack (e.g. stereo, tip/ring bridged, DC supply on ring, balanced, and so on).

Edit: even if the second microphone doesn't require power, you need a mic preamp stage. The output of a typical passive microphone is ~50dB below line level. Your 386 circuit is entirely insufficient for amplifying that small of a signal; you will need to build a mix preamp.

In short, there are many things that could be going wrong...

Not the answer you're looking for? Browse other questions tagged amplifier analog microphone sound or ask your own question.

0
Electret microphone amplifier with analog MEMS microphone
4
What is the best preamplifier circuit for electret condenser microphone?
6
Will providing line-level signals into a mic input damage the recording device?
1
common emitter preamplifier problem
0
Troubles with mic preamp for headphones with integrated microphone
0
Creating a custom TRRS splitter for headphones and mic; how to handle the mic's TRS jack?
2
How to build a low noise MIC preamp
0
Help with electret mic