I am trying to build a circuit with 2 inputs and 1 output using Mosfets.

I will try to explain what I want..

The circuit should accepts 2 input DC voltages , the first input voltage called "MAIN_SUPPLY" which will be the "ALWAYS ON" input that may vary between 22VDC to 25VDC. If the main supply goes OFF then my output LOAD should switch to the secondary input which will be treated as batteries (AS BACKUP) .. Battery Voltage may change from 20V to 30V (Due to the charging).

The circuit image is below , it should work for input voltage below 20V due to the absolute maximum ratings for VGS for each mosfets .. I am unable to make this circuit work with 24V system . Is there a solution for me to use the same circuit 24V system or is there another circuit that would help me .

I chose to use mosfets , because they can switch fast (nano seconds). I have 3 routers with a total power consumption of about 30 to 40 Watts.

The below ciruit shows a complementary design using N-channel and p-channel .I don't have a problem with the P-CHANNEL mosfet . My problem is IRF2805 as its Max VGS +20VDC and i require +30V. Because I am applying 24VDC to the source pin of IRF2805 that means Gate pin must have higher voltage than its source .

When the 2N7002 or similar control MOSFET ties the gates together and pulls them to ground, the p-channel MOSFET is on. Pulling the gates above the supply rail by turning the 2N7002 off results in turning the n-channel MOSFET on. Pulling the gate of the p-channel MOSFET above the source potential has no effect; the MOSFET remains off with low leakage. The resultant switch is a break-before-make configuration, which is necessary to ensure that the secondary, or always-on, supply never has to power the whole circuit.

the label NET [USING_BATTERY_V] is to charge the gates of nmosfet an pmosfet. N-channel has no effect on that . [USING_BATTERY_V] has to be always ON 28VDC. p-channel is affected and it stops 30V to pass thus allowing MAIN_SUPPLY to pass . When we charge the gate of 2N7002 then it turns off all gates and the load switch to secondary_supply. I have rb260gsp as a router and it accepts voltage from 12 to 30VDC so I don't get hurt if the 2 supplies have different voltages.

I don't want to work with surface mount parts.

I can buy any part online .

Is there any mosfet p-channel and n-channel that accepts VGS up to 30VDC.?

I really appreciate your help. 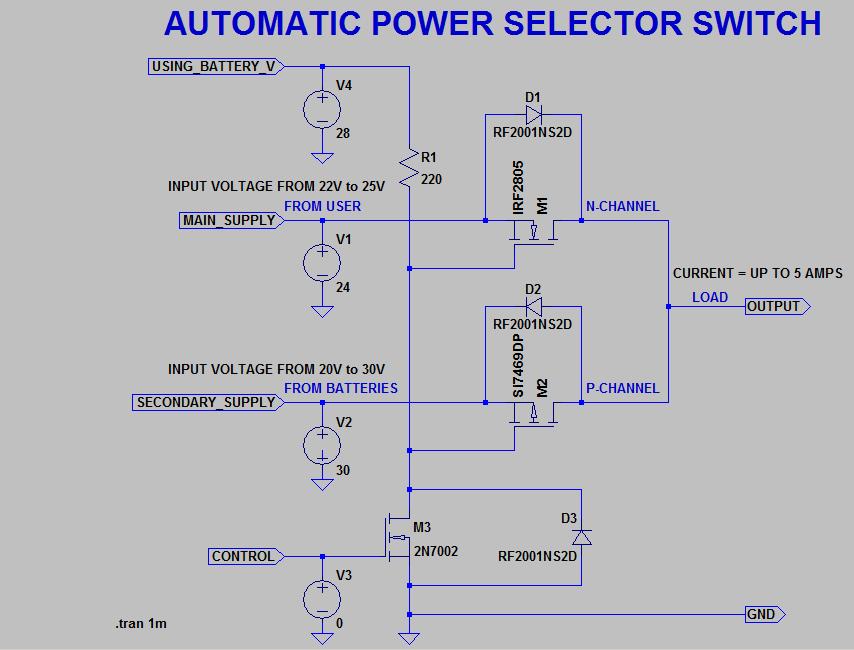 IFF the SECONDARY_SUPPLY battery voltage were less than MAIN, the entire circuit seems to be two diodes. 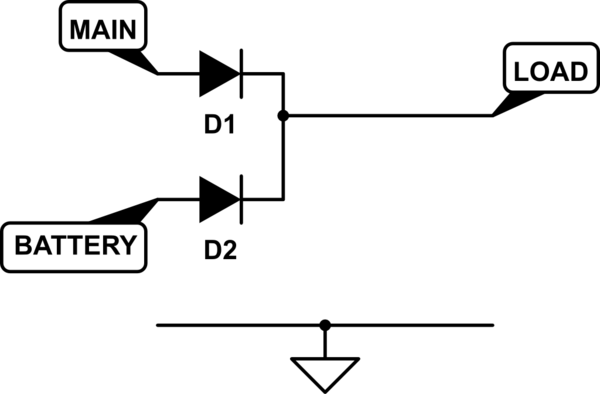 So, the extra complexity comes from the battery voltage being higher than MAIN.

So one solution is to lower the battery voltage, or raise the mains voltage.

Recently, I need to design similar circuit with different specification. I would like to use suggestions already posted.

As suggested by gbulmer, this is a good approach to make automatic voltage source selection. But right component selection is primary criterion to come up with good design which follows all voltage and current specifications.

Exactly, a comparator would be better option for coming up with this analog logical circuit configuration. My selected comparator is for low voltage application, you need to select high voltage comparator. 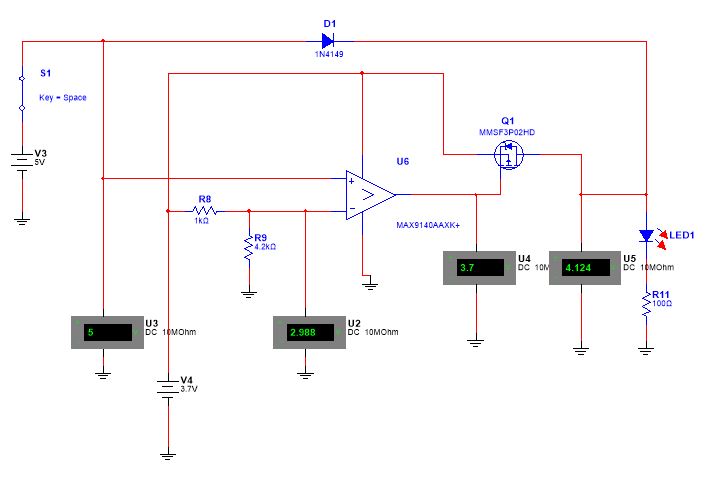 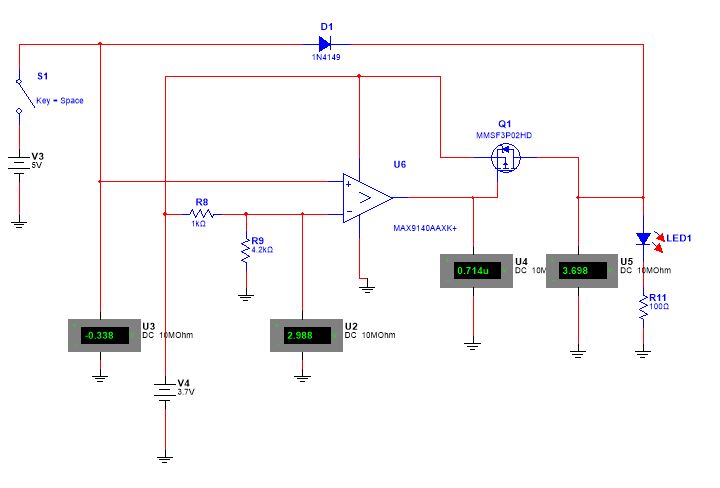 My load circuit needs at least 2A current along with 3.7v regulated power supply. Since main supply is 5V, I have used a buck converter and fully verified TI webench design provides the solution. I hope this approach will provide you desired solution. 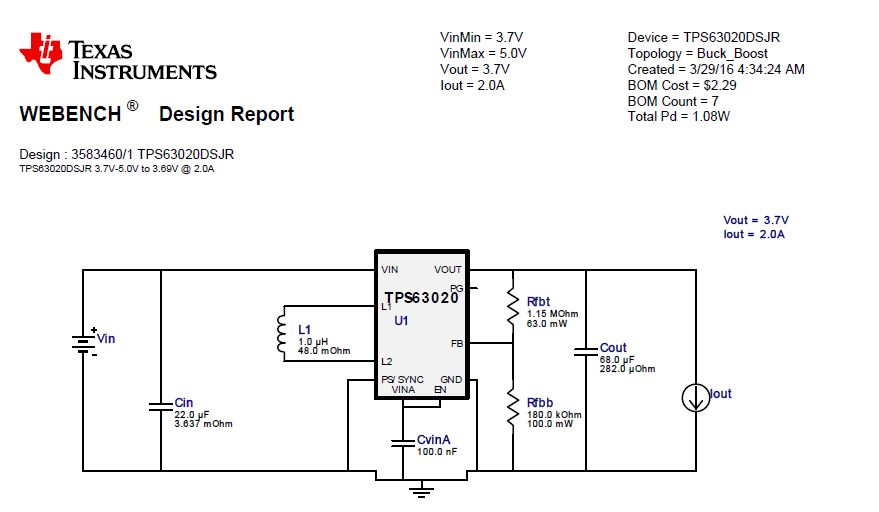 1
Reverse voltage circuit protection using an N-channel MOSFET
5
Vgs and semi-active rectification
1
Mosfet behaving differently with other power supply and same voltage
1
Driving mosfets when supply is greater than Vgs Limit
2
Driving a 35V PMOS circuit from a Grounded/Floating input
0
Question about N-channel MOSFET turn on Voltage
0
How can I make this circuit work?