MOSFET gets unusually hot in a SEPIC converter

I have constructed a SEPIC converter which is to be used for maximum power point tracking (MPPT). For simplicity, I am currently just using the hill climbing algorithm with fixed duty cycle steps of 0.01. The MPPT algorithm is implemented in the MSP430F5529 micro-controller and the PWM signal from the MSP430 is fed to a simple driver circuit for the MOSFET. The PWM signal has an ON voltage of 3.3 Volts which is what the MSP430 naturally outputs.

The following is the schematic of the SEPIC and driver circuit. 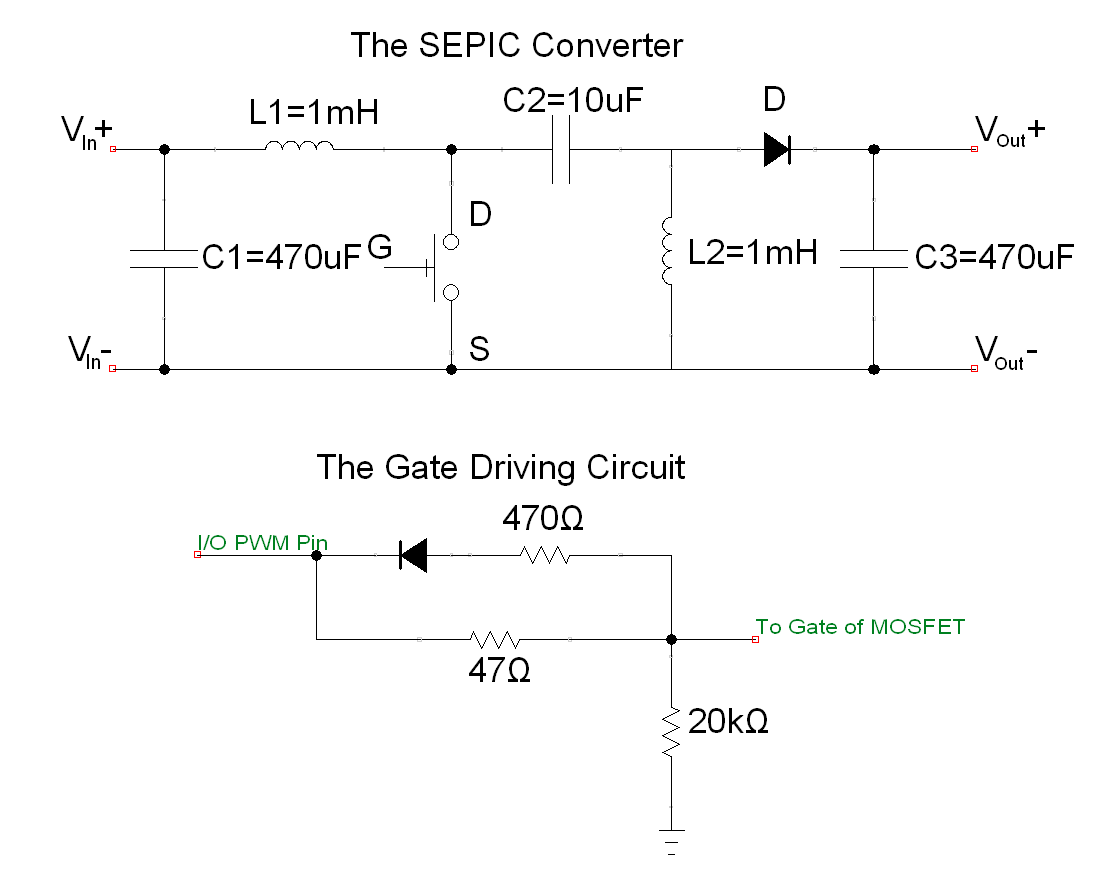 The input is a solar panel with:

Thus, the nominal output power should be around 3 Watts. The output is simply a 22 ohm resistor.

The FQP30N06L power MOSFET is currently being used on the switch and it is being switched at 50kHz. Now comes the main issue and the reason I am posting this question - During operation at duty cycles at around 0.35-0.5, the MOSFET gets unusually hot - At least 70 degrees celcius in a room temperature environment. On the other hand, I did measure the waveform of both the gate voltage V_GS and the switch voltage V_DS as shown in the figures below.

I did notice that the beginning of the pulses of the switch voltage V_DS has some unusually high peaks but I am not sure what these are. Perhaps someone could also point out why these peaks occur.

So what could possibly cause the MOSFET to become so hot and hence cause my converter to be very inefficient?

You need to be driving the MOSFET gate much better than what you appear to be doing to get it to switch efficiently. Look at the spec for the FQP30N06 - gate turn on threshold (Vgs(threshold)) might be as high as 4V. Also look at figure 1 - this confirms that you should be using a much higher gate drive voltage than what you are driving it with: - 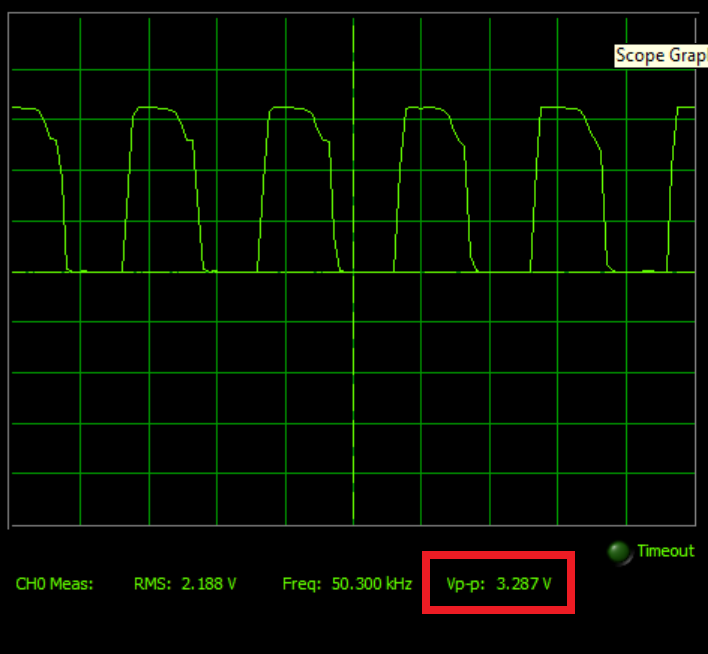 Also, the edges of the waveform are really poor - you are not going to get decent rise and fall times from an IO pin because the gate-source capacitance is going to slow things down.

... the pulses of the switch voltage V_DS has some unusually high peaks ...

Those V_ds peaks happen when the power transistor turns off. During that turn-off, L1 maintains a practically constant flow of electrons. Before the turn-off, those electrons flow through the power transistor. After the turn-off, the same number of electrons per second come out of L1 and they must go somewhere through some path -- that path has an instantaneous spike in current (but a well-designed SEPIC converter should absorb that spike with only a small bump in voltage). The power lines leading into your converter, and the power lines going out of your converter to the rest of the circuit, generally have so much inductance that they can't instantaneously handle that spike in current. So in theory, the only path for those electrons to flow is from the transistor Drain pin to the coupling capacitor C2, through the diode, through the output capacitor C3, and back through the ground wires, back to the transistor Source pin. (Is there a better name for this path than "the spike path"?) (In practice, there's also another path through some stray capacitance that absorbs some of those electrons, but you don't want to rely on that. Also, if the Vds spikes too high, the transistor may break down and allow electrons to flow through it, heating up the transistor -- you don't want that, either).

You want the spike path to have low resistance and even more importantly low inductance. This implies:

Thank you to all those who have posted very helpful feedback on my question. After doing a bit of thinking, I eventually decided to purchase a MOSFET driver chip in an attempt to solve the problem. I also purchased the Schottky diode as suggested by davidcary to replace the existing rectifier diode that I was using. After receiving the chip and doing the appropriate connections as according to the datasheet, I repeated the duty cycle test using the same MOSFET. These changes did help improve the output (From roughly a 15% efficiency to 30%). Although it's good to have the improvement, it's obviously not good enough for a DC-DC converter. Unfortunately, a brief inspection shows that the MOSFET still persists to be unusually hot over the other circuit components (Besides the load resistor).

The MOSFET driver chip I purchased is the TC4427CPA dual MOSFET driver. The following diagram is my new driver circuit.

The following diagram is the new waveform of V_GS and V_DS when I used the new driver chip (The blue line is V_DS and the green line is V_GS). PS: I also forgot to mention the duty cycle that I applied in the original question (Apologies for that). In my original post, the duty cycle applied there was a constant 0.5. In the one below, it is a constant 0.44. 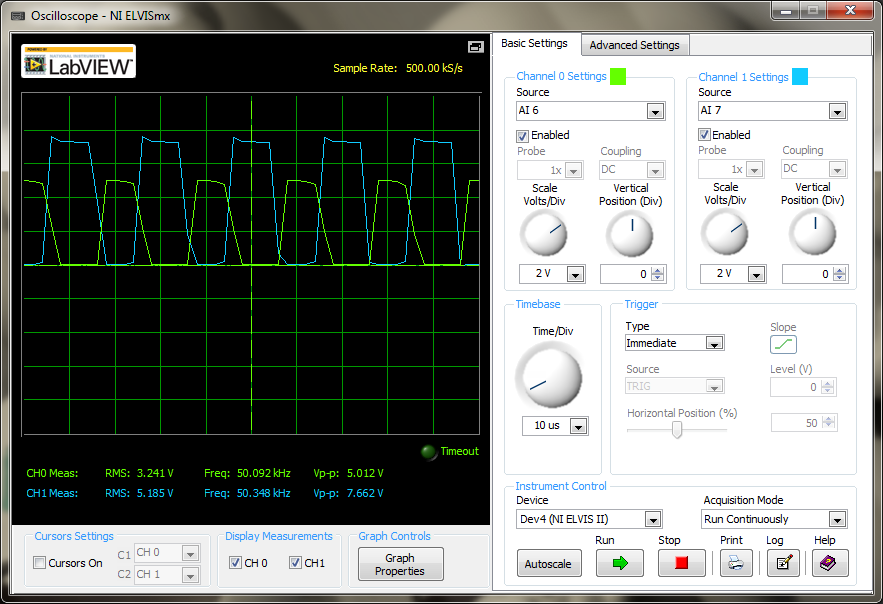 Based on my understanding from the previous answers, the rise and fall time of the V_GS in this diagram is probably the cause for the losses due to switching. However, this is based on using the MOSFET driver chip so I am lost again. What can I do to further refine the waveform of the V_GS to prevent switching losses?

Not the answer you're looking for? Browse other questions tagged mosfet dc-dc-converter mppt or ask your own question.

65
When to avoid using a breadboard

0
Hot MOSFET DC-DC Boost Converter
4
How to properly drive MOSFET in MPP tracking duty cycle above 50% for a synchronous buck regulator at 50-100V input?
1
MSP430 Problem with Multiple Interrupt Timers
2
Power MOSFET gets hot while driving Peltier by step-down buck voltage converter
3
How to deal with "peaks" voltages in mosfet in boost converter?