How does this wall-wart switcher work?

I've provided a full outcome report in one of the answers below with an updated schematic and description of the operating principles as I've come to understand it.

I'm studying switching converters to feed a strange craving to understand how they work. I'm just getting to the part about off-line AC-DC converters in the books, but being a practical sort, I thought I'd open up one I have handy and see what I could explain so far. 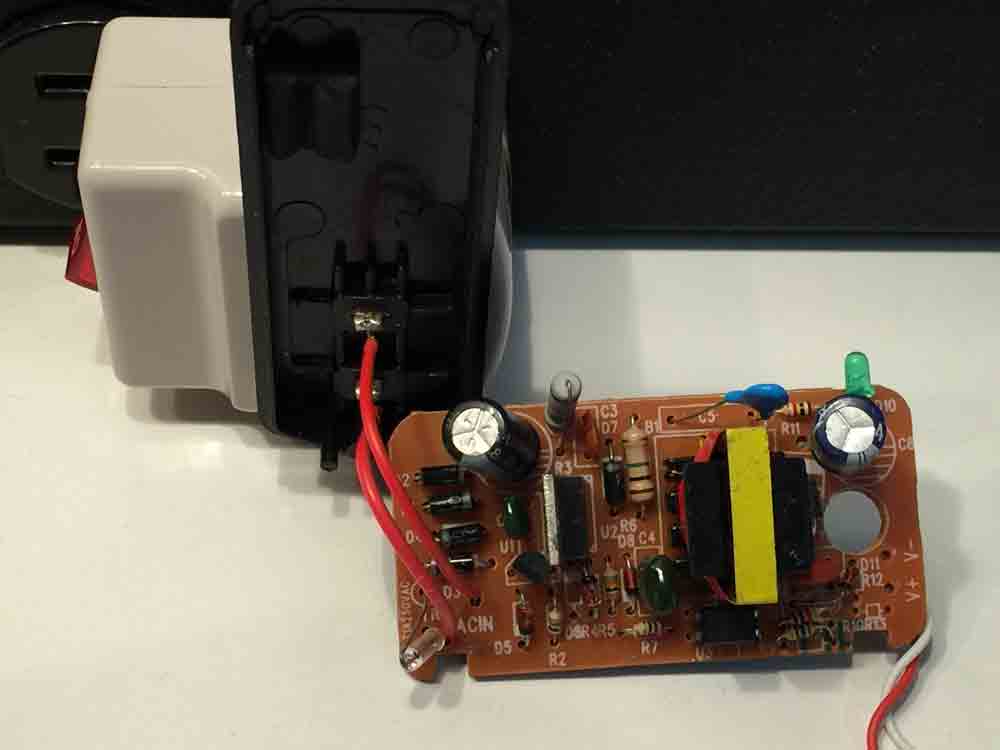 And here's the schematic I reverse-engineered from it:

Here's what I think I understand so far. All component labels are as printed on the PCB:

Here's what I don't understand yet:

Can a more experienced eye help me decode some of this?

R6 is too big to provide all the base bias to U2 in normal oscillation, but it does 'tickle it into life' at start up.

There is no clock because it's self-oscillating. That's what the B1P34 winding is for, through components like D5,8 and R2. This network is disabled when the opto turns on.

When U2 starts to turn on, the feedback is such that it turns on harder. It stays on with the current growing steadily in B1's inductance. Eventually B1 becomes saturated, when two things happen. U2 collector current increases rapidly as the transformer inductance collapses, and the feedback voltage starts to drop for the same reason. U2 comes out of saturation, and the collector voltage rises rapidly. This is fed back and U2 starts to turn off. The feedback now turns it off harder. U1 takes part in this as well by shorting the BE junction to remove the base charge rapidly. This flyback phase ends eventually when the core has transferred its energy to the secondary. I haven't analysed it completely, but I suspect it's the R6 bias that restarts the whole conduction cycle.

R10 is to pre-bias the zener. Zeners don't have a sharp turn-on curve, they can draw quite a few uA at volts below their rated voltage. R10 keeps the zener well into conduction, so the turn on of the opto is better defined.

This doesn't answer all your questions, but may redirect your investigations. Try redrawing the components around B1P34 to emphasise their feedback role.

Bear in mind that some components' function may not be obvious, if they've been added to reduce EMI for instance.

Based on the very helpful answer of @user44635 I was able to make substantial progress in understanding this circuit.

The critical link was the notion of "self-oscillating", which led to the search term "self-oscillating converter" and from there to "ringing choke converter" (RCC). This resource was especially helpful: http://mmcircuit.com/understand-rcc-smps/ -- (EDIT: Link not working. Working link courtesy of the excellent Wayback internet archive: Understanding Ringing Choke Converters RCC SMPS)

I've redrawn the schematic below based on user44635's advice to emphasize the feedback role. I've changed some of the symbol names to more conventional designations, e.g. U1 -> Q1:

Here's my expanded understanding of the operation:

Special thanks to user44635 for setting me on the right track!

Let me know if I've got any of this wrong :)

Not the answer you're looking for? Browse other questions tagged power-supply switch-mode-power-supply wall-wart or ask your own question.

2
How does a cell phone charger work?
0
How do PWM AC/DC converters work

4
ATX power supply front-end: How does this work?
3
How does power in "wall wart" power supplies work?
2
What is an auxillary winding in a flyback transformer?
6
Winding method for barrel wound secondary center-taped EE core
7
Help understanding transformer AUX winding
2
Half bridge converter
0
How to connect toroidal transformer from wall power
4
Ringing/Noise on smps output while BJT turns on
7
How does this circuit start up?