Using optocoupler with MOSFET for dimming a LED

I have a blue LED which I want to dim using an Arduino, an optocoupler and an N-MOSFET.

For achieving this I assembled the circuit on a breadboard as shown in the pictures, using a YwRobot breadboard power supply to provide power to the optocoupler's transistor, and the MOSFET. I used the Fading example sketch from the Arduino IDE.

When I try to dim the LED in this basic configuration: \$(PWM_{out} → Resistor → LED → Ground)\$
The LED slowly lights up, reaches its maximum, then slowly dims, then the cycle repeats as it should in this case.

But in the circuit it behaves weirdly.
It doesn't dim, it's on full brightness, but when the cycle reaches again zero voltage, it's turned off. No sign of any change in the brightness.
I tried modifying the delay of the cycle and I used a multimeter to measure the LED's voltage. As soon as the cycle moved from turned off state \$(0V)\$ to a slightly higher voltage (I used 1 unit increments in analogWrite and 4 second delay) the LED was on full brightness \$(2,8V)\$.

I don't know what's going on. Maybe I don't need one of the resistors on the optocoupler's BJT side? I tried taking the \$R_3\$ resistor out but then the LED was always on, didn't even bother to turn off so I put it back.

Here are the schematic and the Fritzing project: 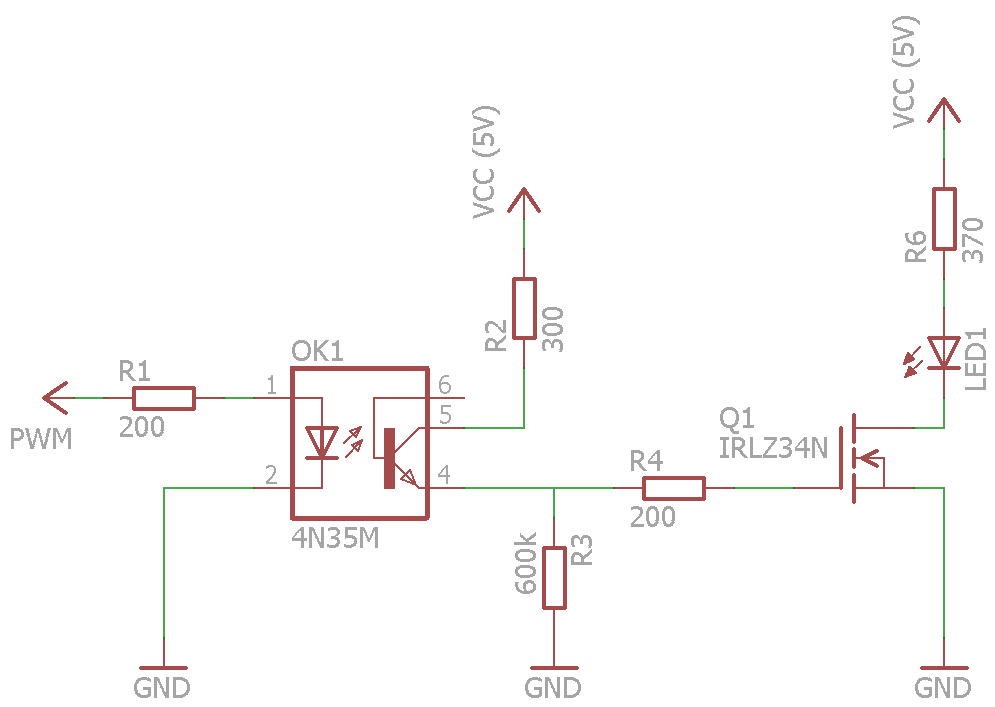 power mosfets have significant gate capacitance and your gate drive is significantly unbalanced.500 ohms to charge and 600K to discharge that's about 100:1 no wonder the PWM osn't showing results.

replace R3 with 1K replace R2 with a wire, that will give a stronger disharge drive and should work better.

0
problem with LED Matrix circuit
0
PIR motion sensor with MOSFET, optocoupler or Relay to turn on LED ribbon
2
PWM Dimming 24v with 3.3v input
0
How to increase the dimming range of mosfet controlled LED
4
MeanWell 3-in-1 dimming
0
Voltage divider with MOSFET for light detector with Raspberry Pi
1
Why is my red LED dimmer without a resistor than with a 100 Ohm resistor?