AC-DC Conversion; How Much Can I Draw? 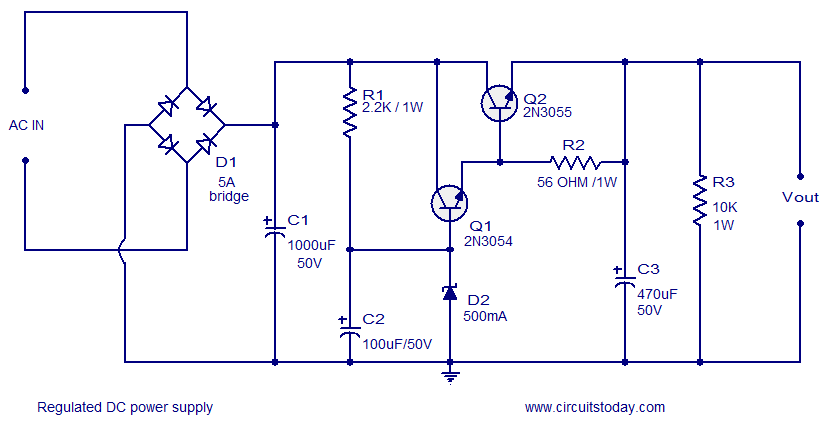 My question is how much Amperage can I draw in DC using this kind of setup. I have a 3055 and it's rated at 15A. Is that my max draw then? Power systems aren't my thing, so I'm out of my element with this stuff. Equations are also appreciated too! Thank you so much!

EDIT: Also, how efficient is this kind of circuit?

You are asking a simple question which does not have a simple answer. Taking things from left to right:

1) The rectifiers must be rated for at least the output current. In this case, if you try to pull more than 5 amps, you will probably kill the diodes eventually. So the rectifiers need to be sized appropriately. Also see point 5.

2) C1 will affect the operation of the circuit. Voltage is only available to charge C1 and provide current to the load when the instantaneous rectifier voltage is greater than the capacitor voltage, and the rectifier puts out a waveform which is roughly the absolute value of a sine wave. So you get a big current spike into the cap at the peak input voltage, and not so much in between. Between the spikes, the cap discharges and you get a sawtooth voltage available to the transistor. For a 60 Hz line, the rectified voltage has a frequency of 120 Hz, or about 8 msec between peaks. For a current i, the change in voltage $\Delta v$ over a time $\Delta t$ is $$\frac{\Delta v}{\Delta t} = \frac{i}{C} $$ or $$ \Delta v = \frac{i \Delta t}{C} $$ So for a 15 amp current and 120 Hz, $$ \Delta v = \frac{15 \times .008}{.001} = 120 \text{ volts} $$ As you might guess, this is not a particularly useful configuration. So for larger currents the capacitance needs to be (much) greater. For commercial linear supplies with this sort of current, capacitors of 10's of thousands to 100's of thousands of microfarads are the norm.

4) Thermal considerations have not been addressed. If you look at the 2N3055 data sheet and the power derating curve, you'll see that 115 watts is allowed only for a case temperature of 25 degrees C or less. This implies an outrageously good heat sink, and cannot be accomplished using air cooling at room temperature. It can only be reached by either liquid or air cooling with the air or liquid being refrigerated below room temp.

5) Less obvious - The rectifier will also require cooling. The same derating principle applies to the diodes as does to the transistors.

All of the above affect the performance of the circuit. As for efficiency, linear regulators such as this are not terribly efficient, especially if the output voltage is required to be variable. For instance, at 15 amps I'd expect the minimum voltage drop needed on the transistor to be on the order of 4 volts. This is because at maximum current the transistor gain gets low, and trying to operate at very high current and low voltage requires a much greater base current. So the output transistor will dissipate about 60 watts. Let's say the output voltage is 5 volts. Then the load power is 75 watts, and the total power supply dissipates 135 watts, for an efficiency of 56%. Commercial units also have to guarantee that the supply will work over a range of input voltages, so the rectifier voltage may sometimes be greater, and the transistor is the part which soaks up the difference and produces extra heat.

Yes, in that circuit the 3055 is the "main pass" transistor. All current to "V out" has to flow through the 3055 first, so you can't draw more power than it can handle, or you'll kill your transistor.

EDIT: Also, your rectifier bridge is rated for 5A, so if the transistor's rated for 15A, the diodes will blow up first.

As for efficiency, if I'm reading the diagram correctly, it's a resistive voltage regulator, not a voltage converter. If you're looking for efficiency, try a buck converter. These resistive regulators are great for getting clean, quiet DC output, but they're quite inefficient if Vin is much more than ~2V above Vout, all the "overvoltage" is quite literally spent heating up your main pass transistor (Be SURE to heat sink that baby appropriately)!

This is a very basic series-pass linear regulator circuit. The output voltage is determined by the zener voltage of diode D2 plus the base-emitter drops of Q1 and Q2. The power dissipation in Q2 is going to be the product of the current through it and the voltage drop across it, which is the difference between the input voltage and the output voltage. Since the input and out voltages are not defined in your question, no definite answer is possible.

In general, the biggest problem you're going to have with the series pass transistor is heat, so how much current you can get out depends on the above and how well you can dissipate the heat generated in the transistor. Most applications of large power transistors have them mounted on large heat sinks. Some designs rely on natural convection, some rely on forced air cooling. It all depends on what you are really trying to accomplish, the environment you're operating in, etc.

As to efficiency, linear regulators are less efficient that switching regulators in many cases, but it depends on the details. As the difference between the input and output voltages increases, linear regulators get less and less efficient because they achieve regulation by in effect "burning off" excess power. Switching regulators don't do this, so even though they are more complex, they have a great advantage in efficiency if there is more than a small difference between the input and output voltages.

You don't indicate where your input is coming from, so just a note of caution: If you're thinking of powering this directly from the AC mains, don't! Unless you know quite a bit more about what you're doing, that would be inviting disaster. I hope that you're looking for a relatively low output voltage and you're planning on getting the input through a transformer (which, of course, would also have to be capable of supplying the amount of current you want).

Not the answer you're looking for? Browse other questions tagged transistors ac dc or ask your own question.

4
Differences Between Smoothed DC & Not Smoothed DC With Respect to Heating
1
How will my power/current draw change if I switch from 120 VAC to 12VDC?
1
Will a switch that says 250VAC 3A work directly connected to the wall?
0
Can I safely connect 20 Raspberry Pi Zeros to this 5V 10A power adapter
1
How much current will this LED draw?
0
Finding voltage gain and current gain using the load line in a common emmitor transistor amplifier
1
How much 12V DC current can I safely draw from an AC 230V 13A socket and why?
1
Powering a small DC motor off of 18650s