How to correctly wire this transformer for 240V?

I have an old transformer (without any details about brand and model) with dual primary windings. I need to set it up to take 240V, but I am unsure about the correct way to connect the windings in series.

Here is a photo of the primary side: 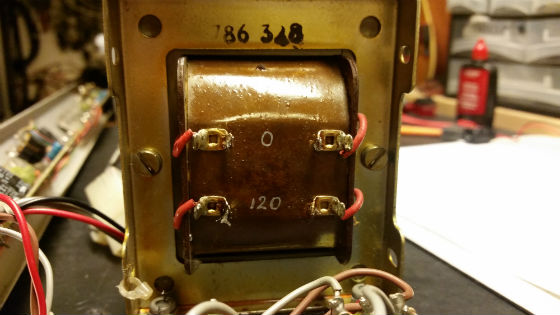 So what is the correct way to connect these for 240V input?

The primary windings go in series, but get it wrong and the transformer turns into a (bifilar wound) resistor. It is important to not connect them in "anti-series". It cannot be seen from the outside how the windings are internally connected. You 'll have to wire it, then carefully test if the transformation ratio primary-secondary is about right.

I think it'd be connected as below, but you'll have to carefully verify the result before using it at full power.

As @jms suggests, add a (regular old fashioned incandescent) 240V light bulb in series when testing. If it lights up while the transformer is unloaded, then you've wired it incorrectly.

I understand from your comments that the transformer is rated for 240V, but do be careful, a new transformer with decent spec sheet is cheaper than rebuilding a burned down lab.

To connect the windings in series, you first need to figure out which pins the two windings are connected to. This can be done easily with a ohmmeter or a continuity tester. Put one lead on one pin, then go around to the others. Two of them will show open connection. One of the other pins will show a few Ohms or tens of Ohms. That's the other end of the winding the first probe is on. The second winding is connected between the remaining two pins, although it is good to check this to make sure you didn't make a mistake.

Now that you know which pins go to each of the windings, the only question is which way they are connected. You can't tell polarity with a ohmmeter or continuity tester, because the windings themselves have no inherent polarity. The polarity is relative between the two windings.

Unfortunately, you can't just try it and see which way it works. If you happen to get it right, then the expected voltage will come out of the secondary, and all will be fine. However, if you get it wrong, the two primary windings will cancel each other's magnetic fields and together act like a shorted transformer. This may cause a puff of smoke to be emitted, or at best, a breaker to pop.

There are several ways you might have available to you to achieve this. If you have some other low voltage transformer, like something designed to run a doorbell, a old model train, and the like, use it to drive the primary directly. Using a low voltage is preferable, but if you don't have anything like that available, connect the tranformer to line power but with something else in series. This something else should be able to run with full line power so that it won't get damaged in case your transformer is wired to look like a short. It also should be something "dumb" and preferably resistive. A desklamp with a old fashioned LEB (light emitting bulb) would be good. A dumb toaster would likely be OK, or some dumb heater. The more smarts and the associated electronics it has, the less likely it is to work well when the transformer drops some voltage.

If you connect wrongly the windings in series, then the magnetic field will cancell each other == no inductance == short circuit. You can wire a light bulb in series with transformer primary and play with correct sequnce. The light bulb will limit the current, if the fields cancell each other then the bulb will lit on full bright, if the windings form an inductance then the bulb shall lit less bright.