It is the opAmp that concerns me. The digital side will get shut down by disconnecting power from the analog side. The analog side will remain powered on. Because the analog side remains powered on the opAmp still applies about 2.1 volts to the pin of the processor. When the processor is powered on there is no current or at least less than the meter can measure. With the processor turned off there is about 300uA of current from the opAmp into the pin. I believe that an ESD diode is being forward biased. There is a 1k resistor and a 0.1uf capacitor serving as a low pass filter. Also there is another 1k resistor serving as input protection to the pin. This makes for 2k of resistnace between the op amp and the pin of the micro controller. 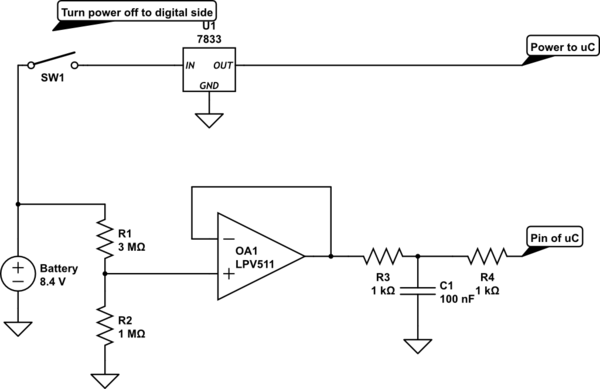 The ESD diode you refer to is not really an ESD diode, it will not protect the processor against ESD. I would call it an input clamp diode, and there is usually one from the I/O pin to Vdd and another from the pin to Vss. The maximum current that you can put through the diode is well specified by Microchip, they call it Injection Current, with a maximum of +/- 5mA.

At a first glance it would appear that your 300uA is well within specification and would not cause a problem. However, the +5mA limit is when the processor is running under normal operating conditions, ie Vdd is 3.0V to 3.6V. I would not assume that the same limit applies when the processor is powered down. What can happen with some processors is that the injected current will try to power up the processor, which means that when Vdd is switched on the processor fails to start up correctly. I don't know if this applies to the dsPIC.

If this is for a commercial product then I would want to be absolutely certain that the injected current causes no problems. I would look to either eliminate it altogether, or reduce it to a minimum as follows:

Have you got a spare IO pin?

If you have then get rid of the op-amp, make the resistor divider much lower impedance (suitable for a direct drive to the micro's ADC) and "connect" the potential divider to the 8.4V supply using a P channel MOSFET controlled by the spare IO pin via an NPN transistor: - 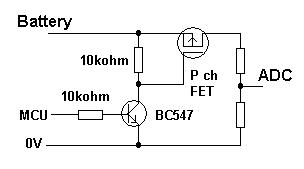 1 msec later you have measured your battery voltage and, given that you probably don't need to measure it for another minute or so, your average current is 1/60,000 times the current taken for that milli second when you connected the potential divider to the battery supply.

By doing this you are exceeding the absolute maximum voltage rating on the pins.

There is no safe current according to the datasheet. It may well work okay (strongly suspect it will), but there are no manufacturer guarantees. Note that you are already well outside (by 10:1) of the manufacturer recommended source impedance of 200\$\Omega\$ (see 70621C).

Again, this may work fine with a typical chip at room temperature, but it's not a good design for a mass produced product.

You are wasting 0.3mA of battery current, right? Why not power the op-amp from the digital supply, then the wasted current is 100 times better. Of course this raises the same question wrt the op-amp inputs, but that's a different question. A 1N4148 and one additional resistor could deal with it.

Not the answer you're looking for? Browse other questions tagged pic diodes esd or ask your own question.