How do capacitors work

Ive been reading up on capacitors. But most stuff is over my head. I'm considering a system with the following attributes:

What will the power output of the capacitor be?

This doesnt seem right to me. Is this correct?

Its correct..... Capacitor can discharge very rapidly thus able to deliver higher output power. However, their input power could be very less depends on the current capability of the power supply that charges it.

If look closely at xenon flash lamp in cameras, most cameras operates on tiny battery but xenon tube operated from them flashes at kilowatts. This is true because a high voltage capacitor inside the unit is charged to +350V by a boost converter. The capacitor takes few seconds to be fully charged. During flashing the entire charge is dumped into xenon tube in mere milliseconds.

Power is actually the rate of energy conversion. Capacitors can do this very fast thus can exhibit very high output power.

This is why capacitors are also known as condensers or accumulators.

The answer provided is somewhat correct, but doesn't make clear that the power delivered to the load is continually varying. 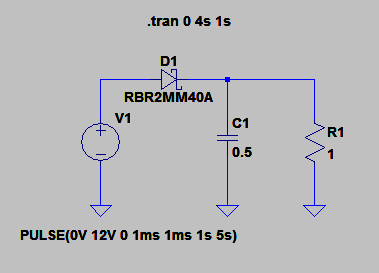 V1 is a pulsed waveform going between 0V and 12V, so C1 is charged to nearly 12V. The resulting waveforms when V1 goes to 0V: 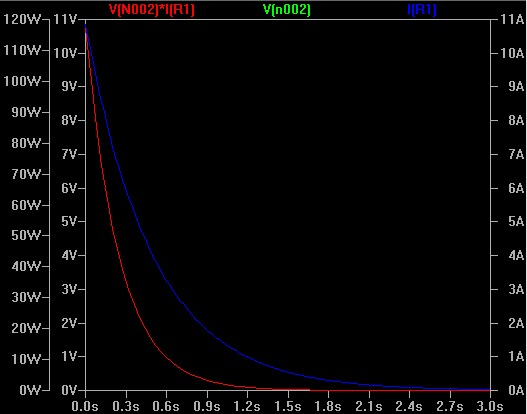 Notice that the voltage starts at 11A and at 120W, but quickly drops down to nearly 0A/0W within that one second. If you took the average power over the 3s time period, you probably wouldn't even be at 10W. When you are talking about capacitors and current, you are nearly always talking about averages (or RMS values) on a periodic waveform. Rarely are you talking about the peak power.

This is only true for an instant and is never true again until the capacitor is recharged.