What does reverse diode on NPN symbol indicate?

Update: A diode in this position is (at least sometimes) referred to as an anti-parallel diode. This term brings up a lot more results on search.

I've been scavenging parts from compact fluorescent (CFL) bulb ballasts just for the sheer joy of getting something for free. Plus, I'm all into inductors just now and there are some nice little specimens in there yearning to be rewound and repurposed :)

The schematic symbol for it in the datasheet includes a reverse diode symbol, like a MOSFET does: 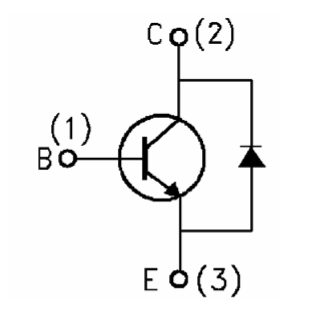 Unless it's escaped me for quite a while now, an NPN BJT doesn't naturally have a built-in body diode the way a MOSFET does, does it?

Can anyone explain what this added bit in the symbol means? Is a bypass diode added as an extra in this case, perhaps because it's meant for high-ish voltage operation in a fluorescent ballast (albeit a pint-sized one)?

Okay, that is an (unfortunately) typically crappy Chinese datasheet. No ratings at all that I can see on the diode.

One could begin to harbor doubts about its very existence, despite the usefulness of a diode in that position in certain ballast topologies (those with push-pull dual transistors, it's not in the right position for a general inductive load).

Here is a proper datasheet for a similar type of part (Fairchild FJP3307D) that actually shows ratings for the diode (Vf = 2.5V maximum at 3A & 25°C).

They don't say whether the diode is a separate part in the same package (as is done with some IGBTs) or whether it's an integrated feature, but that would be fairly easy to find out from a sacrificial sample or two.

Here is a schematic of the type of lamp that might benefit from such a component, from this manufacturer: 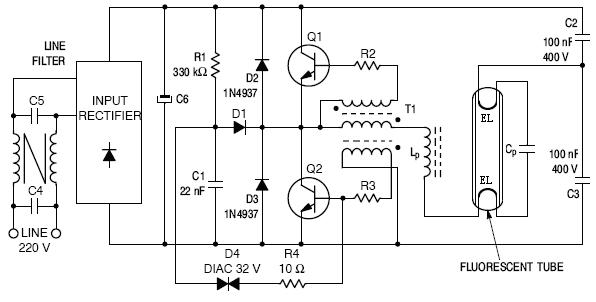 It's a flyback (or freewheelng, or clamp, or catch) diode used to eliminate the high voltage spike generated by the rapid collapse of the magnetic field around an inductor when the current through its winding is suddenly reduced or removed.

The diode is integrated into the transistor for largely financial reasons in order to eliminate what would otherwise be a huge diode inventory, and to eliminate the manufacturing operations of picking, placing, and soldering millions/billions of diodes into CFL PCBs with push-pull transistor drive.

I recently took apart a smallish CFL, and found a couple of 4128 PLs inside, and here's a link to their data sheet

The diode is called freewheeling diode.

A "freewheeling diode" is put into a circuit to protect the switching device from being damaged by the reverse current of an inductive load. It is normally placed in a circuit so that it does not conduct when the current is being supplied to the inductive load.

When the current flow to an inductor (and an AC induction motor certainly is one) is suddenly interrupted, the inductor tries to maintain the current by reversing polarity and increasing the voltage. Without the "freewheeling diode" the voltage can go high enough to damage the switching device (IGBT, Thyristor, etc.). With it, the reverse current is allowed to flow through the diode and dissipate.

Not the answer you're looking for? Browse other questions tagged switch-mode-power-supply power-electronics npn symbol fluorescent-lamp or ask your own question.