How do I design correctly ground plane separation for Texas Instruments TPS63060 IC?

I'm concluding my two-layer PCB design and my last obstacle is ground planes.

Specifically, the problem is the TPS63060 IC that requires Power Ground separation from Control Ground (pin 7). That is a 2.2 MHz max buck/boost regulator that will actually operate between 3.3-7V 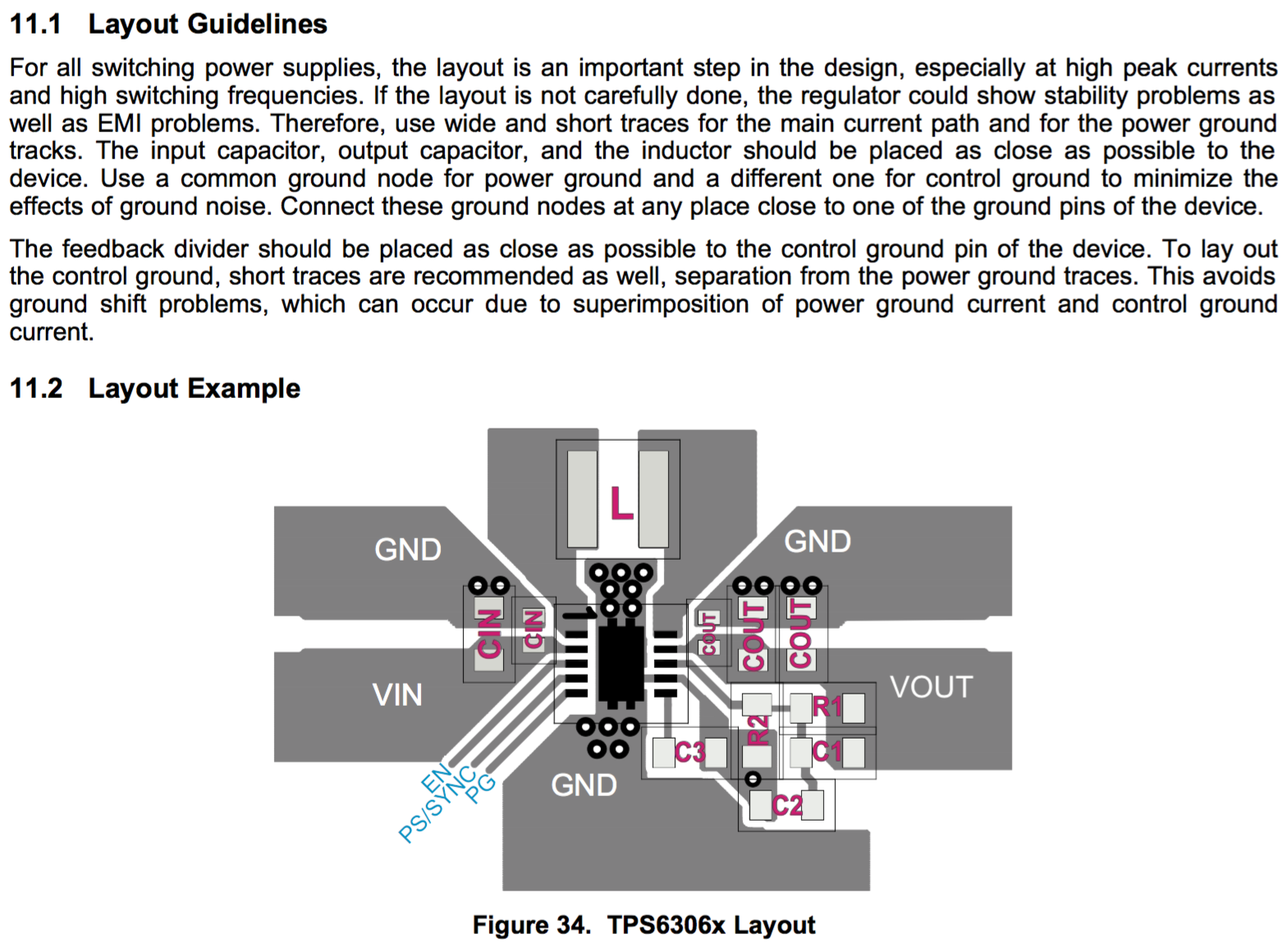 My design looks pretty the same but I don't understand how to predict the path of the Control Ground return current.

On the basis of what I understood, C2, C3, R2 grounds are connected on that island, then they are switched on the bottom plane. The return current, however, should return to the device's ground that sends that VIN. But return current could simply pass through thermal vias and come back to the top ground plane and follow an unexpected path: the Power Ground path. 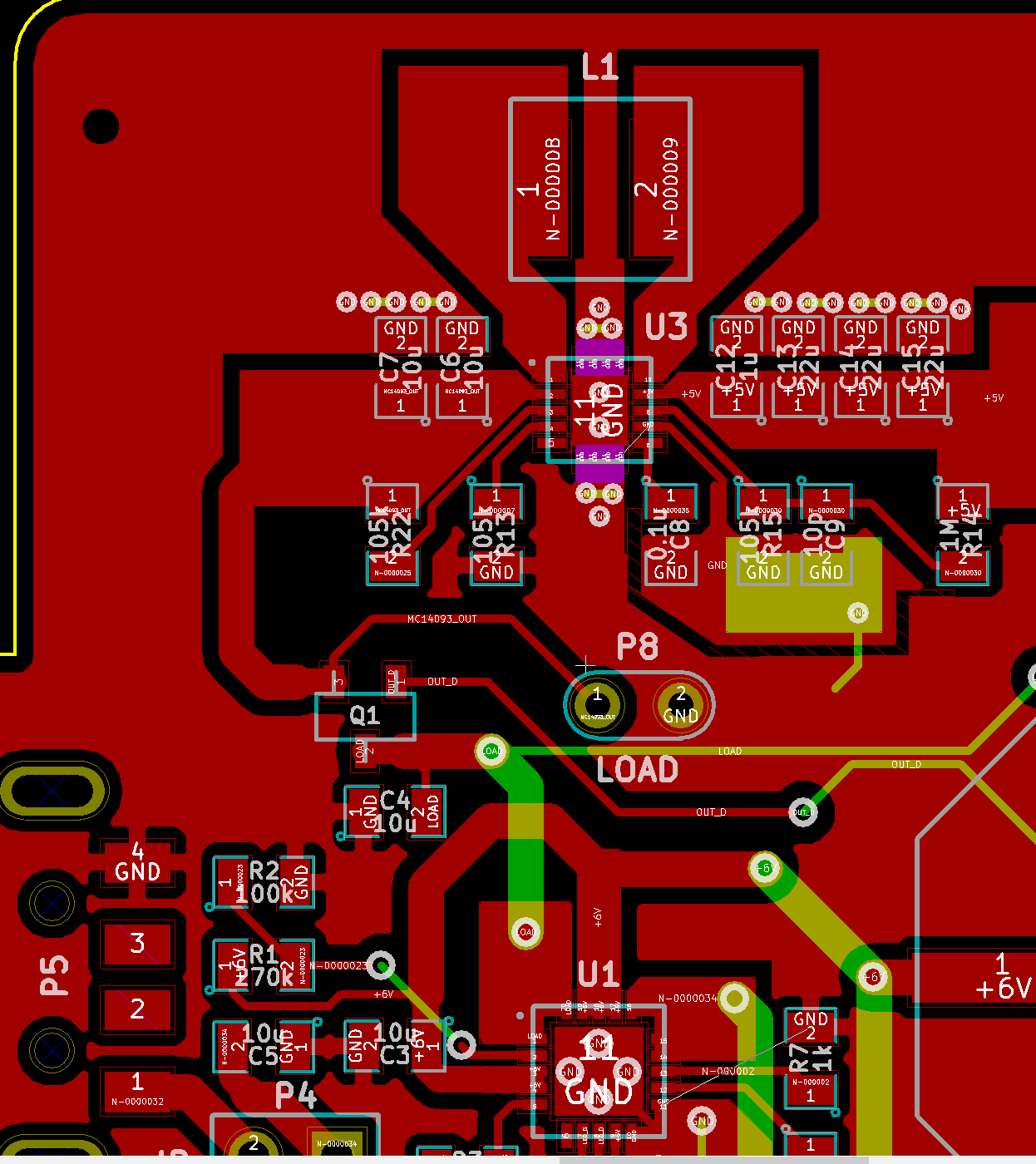 I'll take a stab at this real quick, though it can be a fairly complex question. Manufacturers are often quite bad at communicating what they mean by 'separating the grounds', and the piles of application notes of varying quality do not help that mess.

Basically, TI is asking you to keep those grounds "separate" in the sense that they do not want (example) 5A of current flowing through the output switches/stages to perturb the ground reference the IC is using for it's small-signal control loop.

Let's say your ground plane / copper has a resistance of oh, 0.010 ohms (which is stupidly high for a copper plane). In a buck converter, let's say your bottom synchronous switch turns on and current is now flowing through the blue arrows there. With the resistance of the plane (leaving out the inductance here), Ohm's law tells us there's a 50mV drop that will occur. Nearby components that are attached to the ground plane near the path where current is flowing will have their ground perturbed by the current flow (one of the simplest things a designer can do is simply place sensitive circuitry physically separate from high-power areas).

Your part has four integrated MOSFETs -- I've illustrated below the current flow path assuming your device is in buck-mode, and the low-side switch is currently on: 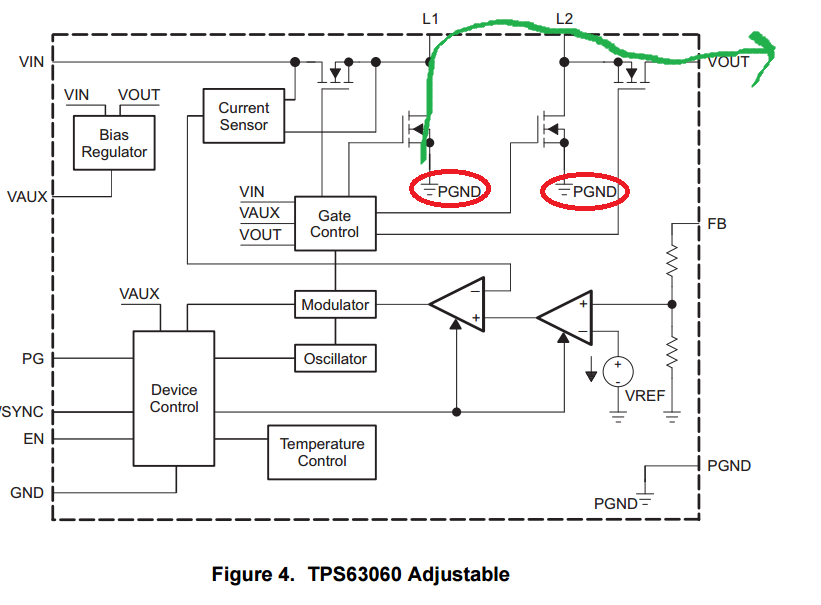 This will perturb PGND (which in the end, is connected with as much copper as possible to your ground plane). However, the feedback amplifiers and gate drivers are going to be referenced to logic ground (the blue areas): 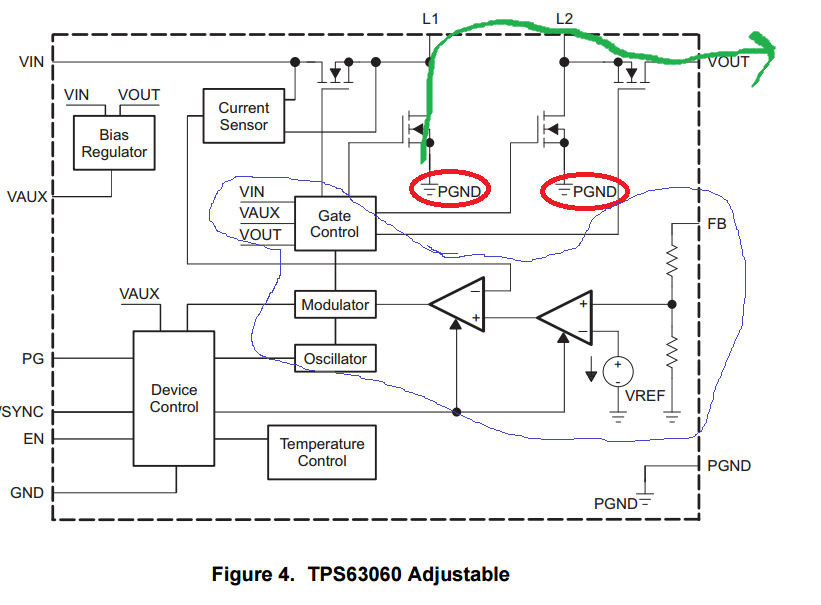 It should not be a particularly high-current path -- the largest current draw there should be the gate drivers internal to the IC. I'm going to change example diagrams here, because I think TI actually got it backwards in their block diagram view (the adjustable version should NOT have internal FB resistors): 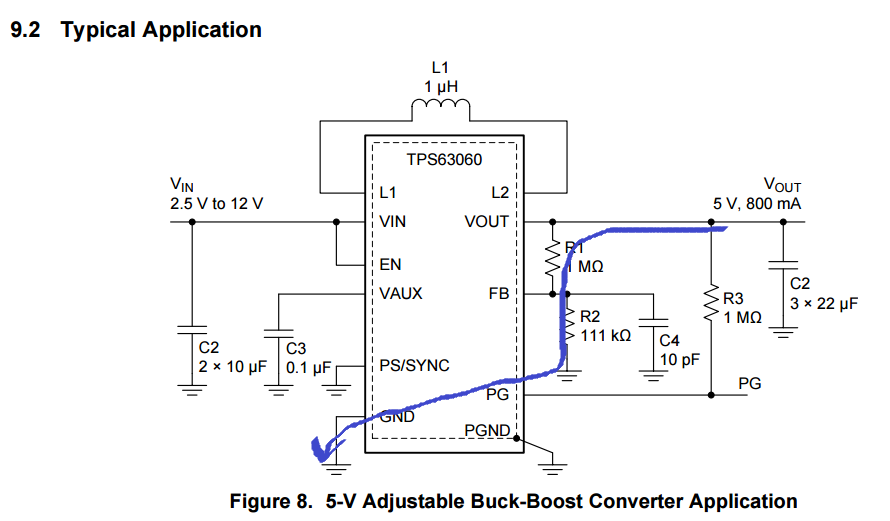 That's it -- a very small current is going to flow through that path to give you your feedback voltage. In their example, as long as all of the small-signal external components (feedback divider and compensation) use only pin 7 of the controller as their return path, and you tie it to GND at one point (like under the controller like they have done), the controller will see the correct potential and 'ride the bronco' so to speak -- as the MOSFETs draw current and switch rapidly, the gate driver + controller is going to be right along for the ride.

So the weird thing to do (IMO), would be to place additional GND vias (like TI seems to have done in that layout example, between C2 and R2) on that return path, because now you've created a potential loop (red vs yellow): 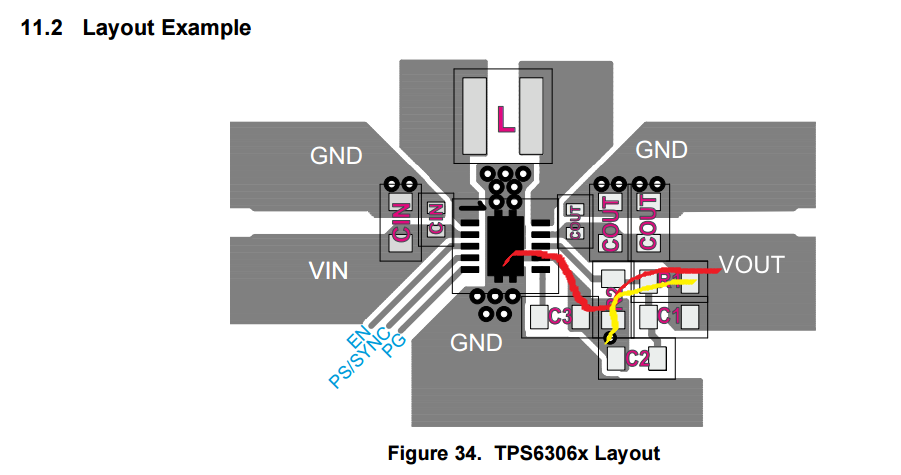 EDIT: I figured out what that via is. It's confusing on TI's part -- it's from their development board: 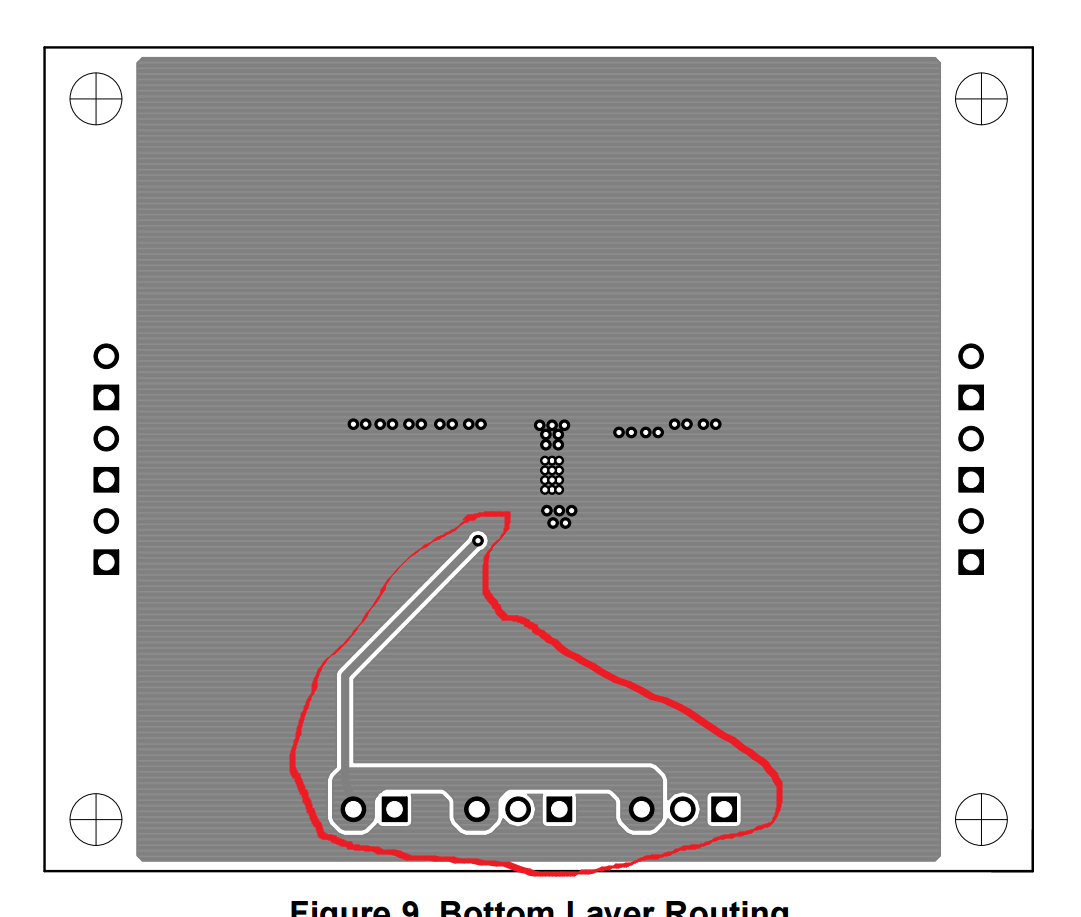 It simply is breaking out the quiet GND to test points on the EVM. So, do not put that via there -- only tie all the small signal stuff to pin 7 of the controller as they have done, following my red current return path. :)

In terms of recommended reading, I will personally say that I find Linear Tech's datasheets to have excellent layout recommendations that have served me well -- finding a similar part from them that is a four-switch buck-boost converter (like the LTC3785) should be helpful. Additionally, here is the page from Analog Devices regarding ground bounce.

Here are some thoughts on switching converter layout (in general):

tl;dr -- Run all the small signal feedback components back to pin 7 on this particular controller. Do not pass GO (GND plane), do not collect $200 / ground bounce / multiple loops. Send a note to TI since I think those block diagrams are flipped.

I hope one day to have the time to sit-down and do an interactive video showing the layout of converters like this, because it actually isn't that complicated -- it really all comes down to being cognizant of where (and when) the currents flow through the circuit.

Not the answer you're looking for? Browse other questions tagged pcb-design integrated-circuit ground-plane or ask your own question.

8
Proper way of connecting logic GND / power GND on MOSFET driver
11
What is causing the spikes or oscillations in my Buck-Boost converter?
1
Where should I connect power ground and control ground for a switched power regulator?