I've got a small PIC-based TTL circuit device, powered by a 4.5V coin cell, that needs to drive a solenoid which requires 12V. Obviously my logic level device can't directly power that so I could either replace the cell with something stronger, or use a boost converter. Is there another option I'm missing?

This seems like it would be a very common problem so I don't want to reinvent the wheel here. What's the most common way to power higher voltage devices like motors, solenoids, etc from logic level circuits?

There are many boost converter ICs available (as you probably know).

One which is low cost available and effective is the ancient but still worthwhile MC34063. If it's a one off and you want maximum performance and don't mind paying a few dollars for the IC there a better ICs than this. But for even modest volume this IC does well in many cases and is about as low cost as any and is very flexible and easy to use.

Here is a datasheet for the ST version - most major IC makers make them still.

See fig 13 for a stepup circuit. The 0.22 ohm resistor is an optional current limit sense resistor. 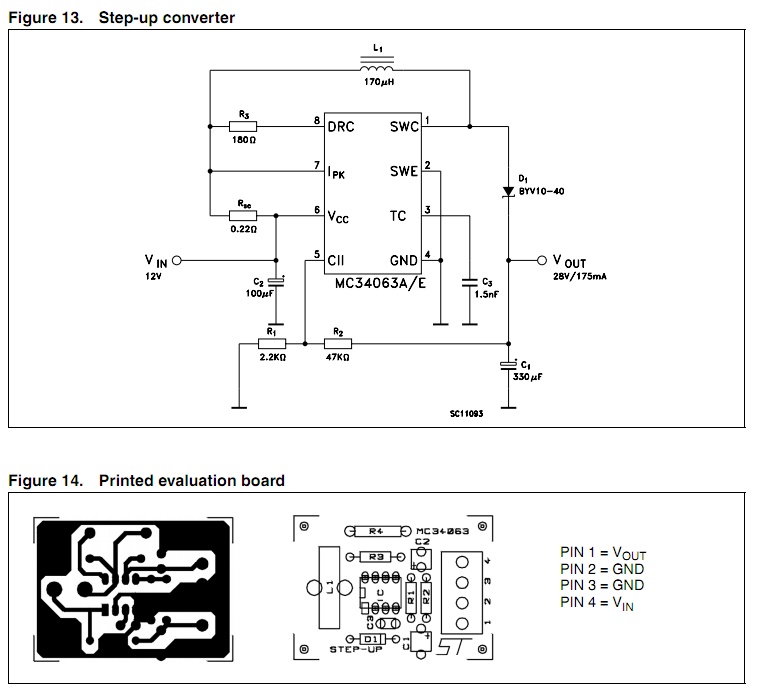 A question has been raised re required power and energy levels. I assumed that as you are using such a small battery you would be wanting to pulse the solenoid and not to hold it in. As we don't know the application this assumption is just an assumption.

A look at Digikey's site shows the samllest solenoids they sell have continuous operating powers in the 2 to 3 Watt range. You will be able to buy smaller and a custome one could be ,ade that was MUCH small power (and performance) wise.

If you assumed you wanted to pulse the solenoid to open a latch or release a rope or spring or ping a bell, then say a 0.1 second excitation pulse may be good enough. Assumptions can be adjusted. Say 3 Watts x 0.1 second = 0.3 Watt second or 300 mWs. Allow say 60% overal conversion efficiency so say we need about 500 mWs. As the battery cannot supply that instantly a capacitor must be used to store the energy. For charging purposes that's 500 mW for 1 second or 250 mW for 2 seconds or 50 mW for 10 seconds etc.

Battery type is unknown. 4.5V sounds like it MIGHT be 3 x Alkaline. so 3.xv would be close to true.

Regardless, such small batteries unless speciallu made have low max mA out. 1 mA may be typical for some. 10 mA would probably be mx in most cases.

Increase the solenoid on time to one second (you'll need a suitable reservoir capacitor) and operating energy does NOT increase by a factor of 10, because hold-in current can be much less than operating current. A factor of 5 to 10 is not unknown. That needs extra electronics to get a high current pull in pulse and a lower holding current, but it is not hard to design.

A proper description of the bttery is required.
Link to data sheet would be best. 4.5V coin cell is unusual. Does it have to be that small? A single AA battery has both vastly more energy content AND much higher acceptable energy transfer rate. On Watt continuous is acceptable and you can hold a small solenoid in indefinitely at that level if you need to.

If an AA battery is too big its nasty little AAA cousin may do. These are worse in all respects, less efficient on space (but smaller) and cost about the same. Or a flat Lithim Ion or Lithium Polymer battery can be had in very small capacities and may do the job far better.

What is the task.
Is there a datasheet? IS there any sort iof spec for pull in curremt, hold in current, hold ij time, stoke or force or ...?

You would need to use a boost converter, or add another couple of batteries.
What power rating is the solenoid?

However, a typical coin cell (e.g CR2032) will not be able to supply enough current to drive a typical solenoid. You mention 4.5V though, so it can't be a standard lithium coin cell - what kind of battery is it?

Not the answer you're looking for? Browse other questions tagged pic dc ttl boost or ask your own question.