Can't find the right power supply - could I use something similar?

So I've just bought a Behringer MX2642A mixer off eBay, which worked for two hours then promptly shut down. After investigation, it seems that the power supply might have given up - the specs for the mixer are (checked with Behringer):

However the supplied PSU was:

The connector is a weird screw in-job, with three pins. Two for AC and one for "CT" whatever that is...

Behringer no longer make these PSUs, and I can't find anything remotely similar online. Could I use something like this http://www.maplin.co.uk/p/3a-acac-fixed-voltage-12v-power-supply-n57dl

Could I even wire two adaptors together? 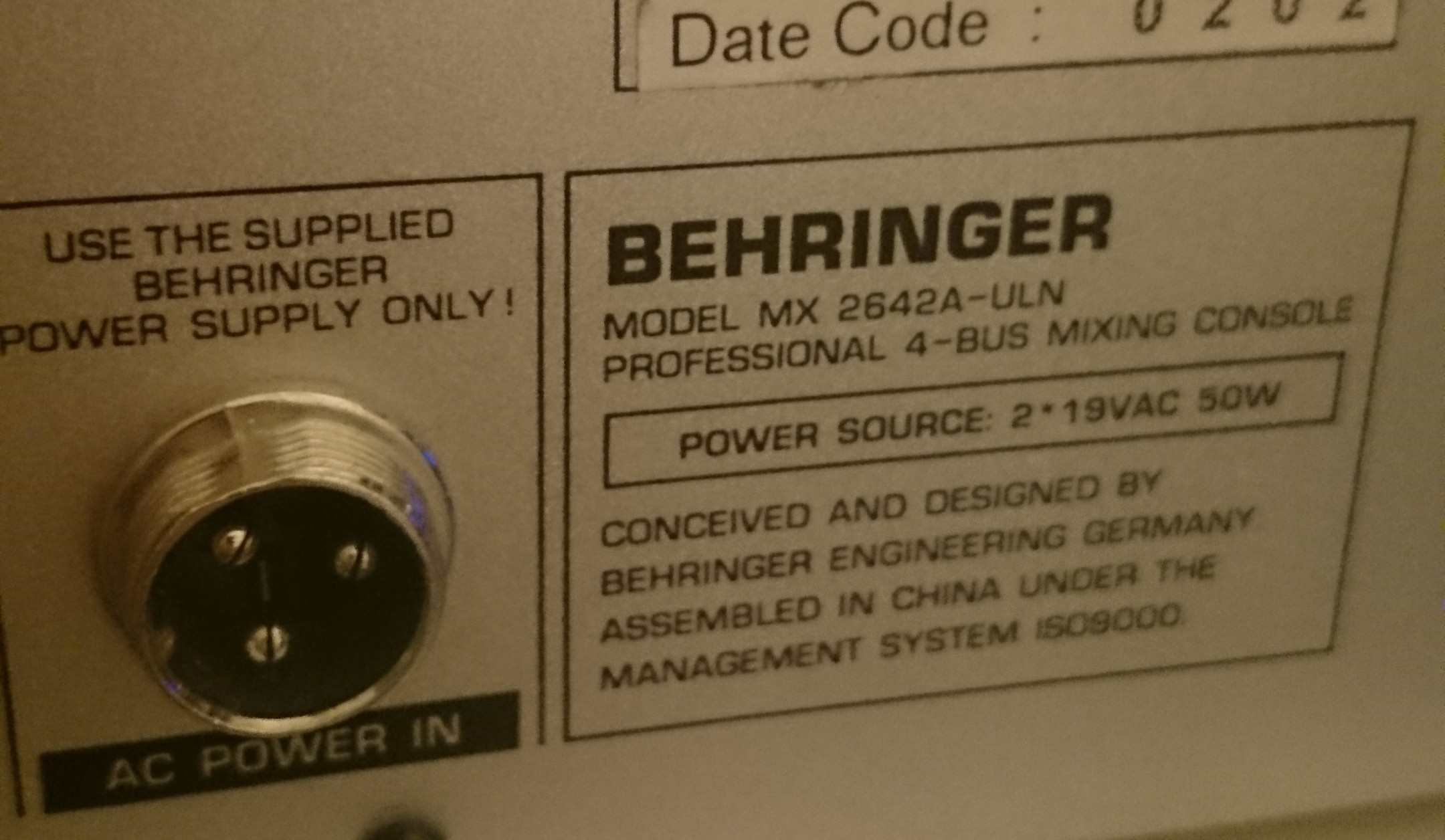 Couldn't post this as a link, but it's here: imgur.com/n5CY6uM

I am not familiar with this product but a web search for the part number seems to refer to Power Supply Model MX1-xx where xx appears to be a country code - presumably defining the input voltage and mains plug. 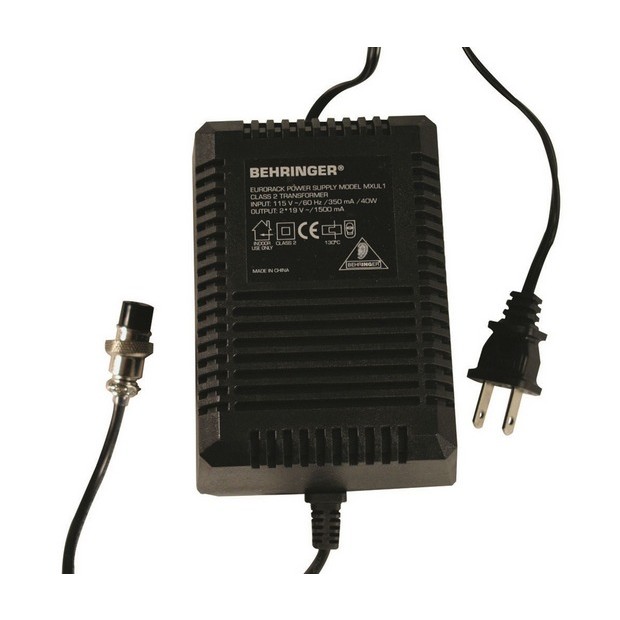 The voltages agree with those you have quoted but are a bit unusual. Since they say 2 x 19 V AC at 2.6 A it implies:

The power-supply and mixer rectifier are probably arranged as shown. The rectifiers will peak at about ±26 V giving a nominal ±24 V supply in the mixer. You can see from this why a 12 V DC power supply isn't going to work.

The 32 V CT, 500 mA PSU probably reads 32 V, centre-tapped as in my schematic, giving 16 V per side. The current is too low so it probably cooked the transformer or blew an internal fuse.

All is not lost. If you can find a transformer with two 18 to 20 V secondaries rated at 2.5 A minimum then:

Alternatively look for an MX1 PSU to suit.

It sounds like the original supply is just a transformer with a 38 volt center-tapped secondary, and will probably feed a bridge rectifier in the mixer, arranged to provide positive and negative DC power - something like so: 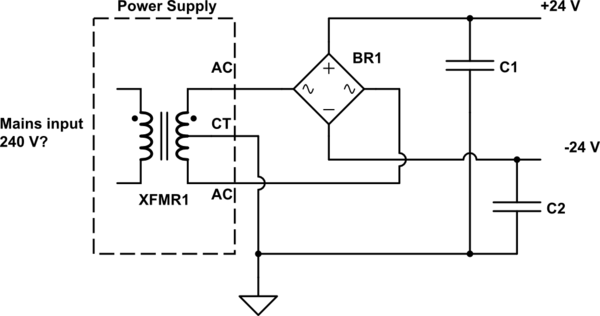 What you are calling a "power supply" is apparently just a transformer.

You say the unit wants "2x19 VAC". That sounds like it wants a transformer with a center tapped secondary, with each half putting out 19 V. That's not too far from 32 V center tapped, since that would mean 16 V from each half.

That fact that it is expecting the bare connections of a center tapped secondary is pretty much confirmed by the fact that there are three pins, two labeled AC and one CT (center tap).

AC line voltages fluctuate, so most likely the device is designed to deal with a reasonable range of AC voltage. If the spec says 2x19 V, then it wants a 38 V center tapped transformer. The 32 V CT transformer may have been marginal.

Are you really sure the transformer broke? That's not the kind of thing that usually breaks, except maybe a wire due to having been flexed too often.

Look around for a transformer that works with your line voltage with a 38 V center tapped secondary. It must also be rated at 50 VA or more. The more common voltage of 36 V should work just as well.

"CT" would be "Centre Tap". So you could think of it as a 38V transformer with a "centre tap" in the middle at half the voltage, or equivalently, as a 19-0-19V transformer.

The big problem is that the power supply you were given was hopelessly under-sized.

If you can find a transformer that's close enough to 19V AC, with a current capability of at least 2.6A (more doesn't matter), then you could wire two of them in series to make a 19-0-19V supply.

If the photo posted by @transistor is accurate it represents a Class 2 transformer with a center-tapped secondary.

Since it's a Class 2 with 50W out, it probably has a fuse internally. There are two common ways something like this could fail, and one uncommon one.

First, the cord could have failed - particularly the AC cord and usually near the strain relief or the circular connector. In the latter case, the repair is easy- open up the connector, shorten the cable slightly and renew the connections. In the former case you can usually open the case and push a few inches of wire through the strain relief and again eliminate the broken bit. If the unit works and doesn't work when you wiggle the cord at one end or the other, that is an excellent indication that a broken wire is the problem. Since it seemed to work for a while, this is quite likely the case.

If not, I suggest double checking with a multimeter to ensure it is actually bad. Test the primary and secondary resistances to ensure there is a reasonably low resistance (hundreds of ohms at most on the primary and probably tens on each half of the secondary) between the 3 sets of pins. If it measures open on the primary, it's probably a fuse. (If it measures continuity on all the 3 winding tests, plug it in and test the voltages at the output- if the voltages look about right- they'll be higher without a load- then the problem is not the power supply.

If it's inside the power supply, it can be opened- if there are screws, remove them and open the case, if it is glued or ultrasonically welded, you can carefully squeeze the sides of the case to force the joint open along various spots of the length. Look for a fuse inline- if you find one replace it (only) with the exact same type and rating. If you can't find a fuse, look for a lump in the transformer and maybe ask another question. It may be a thermal fuse. The fuse could have gone from getting tired (it gets a hit every time the unit is turned on and over time the element can sag and fail), or there could be something wrong in your mixer.

When the repair is done and tested thoroughly, replace the screws or epoxy the case back together.

The uncommon way- if you open the case and you smell strong burned insulation, then the transformer itself may be toast, and not practically repairable. That's rare though.

Not the answer you're looking for? Browse other questions tagged voltage power current ac transformer or ask your own question.

0
Getting the right converter for this 110/120v device, where the power is 220/240v
1
Can't find the correct voltage and current source
0
I can't understand the logic with power = voltage * current
0
Right power supply for 5050 led strip
4
Can someone help me to find the right transformer for this power supply?
2
Find the maximum power