Is it possible to "trace" a hall effect sensor on a PCB?

To my knowledge, a hall effect sensor is just a soft-cored hooped metal (iron?) with some wire wrapped around it a precise number of turns. This surrounds another wire that you wish to measure the intensity of passing current. The coil has a magnetic field inducted into it and thus, current flows through the wire and can be measured without invading the circuit.

I'm trying to measure the varying current on a DC line (5A max @ 15v *ish) without paying too much for an expensive hall effect sensor, or putting a high rated resistor in series. My circuit should only be worried when I'm approaching the max current and I'll probably use a potential divider and a comparator to detect this.

So my idea is; would applying a square trace right next to the current line on a PCB like an antenna, induct any current, and would it be measurable? Could I bypass buying expensive components and tune a comparator to detect the inductance myself work?

First, I think you got the principle of hall sensors wrong.

A hall sensor is a rectangular, thin piece of a conductor, through which a current is drawn from one side to the other:

A magnetic field perpendicular to the screen plane causes a force on the moving electrons, either upwards or downwards. This causes a voltage between the upper and lower terminal of the sensor, which should be measured with high impedance. The voltage depends on the material and (linearly!) on the current and the magnetic field.

So a hall sensor is a pure magnetic field sensor, but of course you can use it to measure the field of a second current, and so measure this current. There are many ICs available which do exactly this.

What you described in your first paragraph sounds more like a transformer, which can also be used to measure currents. But as they rely on induction, they only work for AC, while hall sensors can be used for DC, too.

This is also the reason why your idea about a second trace parallel to the trace to be measured does not work. You DO need a hall effect current sensing sensor. There are many different types of these sensors, but in most cases, the current has to flow through them. However, there are some ICs which are just placed over a trace, i.e. the current does not flow through the sensor, only through the trace beneath it.

For example this type from Melexis: 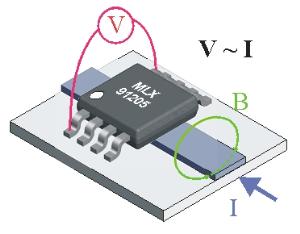 Not the answer you're looking for? Browse other questions tagged current hall-effect sensing or ask your own question.

6
Making a Hall effect sensor into a PCB