How (or if?) to isolate inputs to op amp summer?

I am building a function generator as an exercise. I have a 9V power supply that I split into +/-4.5V. The +4.5V side powers an Arduino that outputs the waveform as a series of 8-bit values on digital pins 0-7. This 8-bit bus feeds an R2R DAC that converts it into a voltage from 0 to 4.5V, thus producing the waveform.

I want to be able to vary the amplitude and offset of the generated waveform. Also I want it to be centered on 0V instead of 2.25V. I figured I could do this by feeding (a) the waveform (from 0 to 4.5V), (b) -2.25V, produced by dividing the voltage between ground and the -4.5V rail, to center the waveform on 0V, and (c) a voltage from a potentiometer across the +4.5V and -4.5V rail, to control the offset, into a op amp summer. Another potentiometer would control the gain of the op amp and thus the amplitude of the signal. I am using the op amp in the inverting configuration to enable a gain of less than 1.

My problem is the the summer isn't working the way I expect. The op amp itself is fine, but the input to the op amp isn't what I thought it would be.

I think I know what's going on here. All of these things are connected to the others, so for example "Center" affects "In." What I'm wondering is, what's the right way to fix this? More generally, how does one isolate the inputs to an op amp summer so they don't affect the others? I guess that one solution would be to buffer each of the inputs, but is there a simpler way? 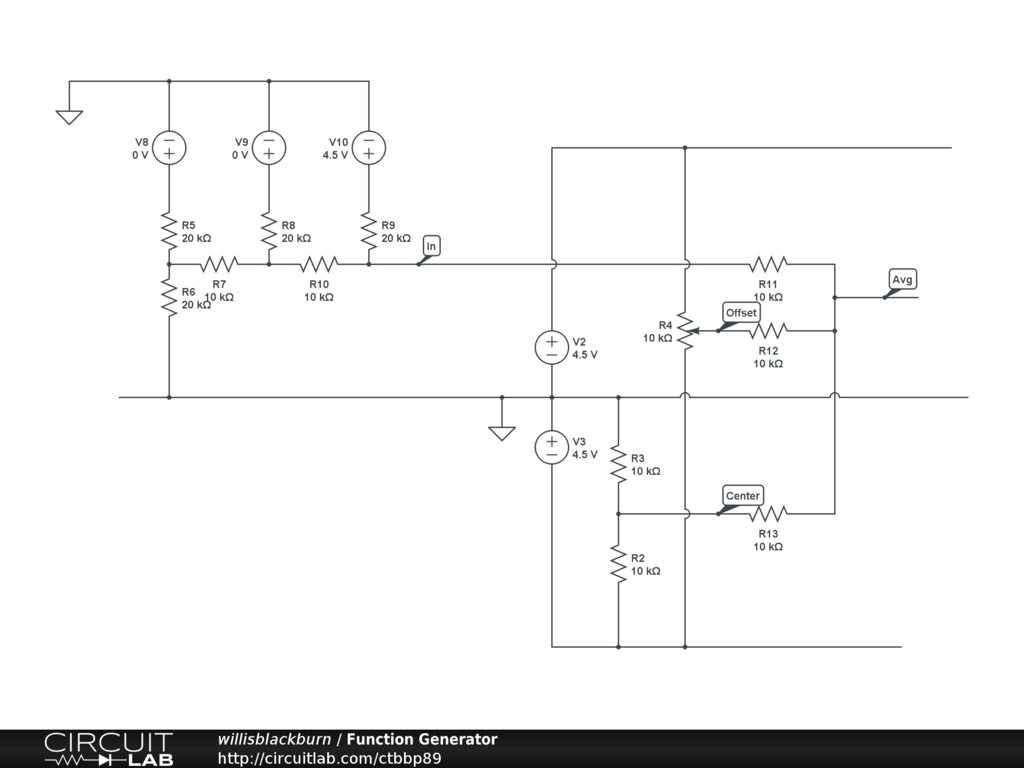 I guess that one solution would be to buffer each of the inputs, but is there a simpler way?

Not really. You'd have to buffer them somehow, regardless of complexity. And op amp followers are of low external complexity.

But that seems like it can't be right if what's behind the equal-value resistors is more resistors. What am I missing here?

You're missing buffering. The buffers would have high input impedance and low output impedance, leading to minimal losses on the summer inputs.

Not the answer you're looking for? Browse other questions tagged operational-amplifier resistors ohms-law kirchhoffs-laws function-generator or ask your own question.

3
Voltage regulator design with op amp
3
Using the offset NULL on an omp amp
0
Changed Op-amp, now signal is not centered
1
How to amplify a small AC (no DC offset) wave with an op-amp powered from a 0-5V rail and a pot-varying gain?
0
op amp for CT sensor
0
How to calculate appropriate value for noise-removal capacitor?
2
How to null offset on op amp without affecting gain?
1
Op-Amp circuit: Check understanding
0
Op-amp variable reference voltage
0
Photodiode + Op-Amp Acting Nonlinearly