Designing circuits with a longer lifetime

I have learned about the pic microcontroler for a period of time and have a reasonable amount of knowledge about handling digital electronics. I have worked on basic electronic projects and now I need to work on some commercial applications.

My question is about how to design and build reliable and long lasting circuits. I built a automatic light controller circuit which takes the input from a LDR and displays the value of the analogue reading on a seven segment panel. Then it does some calculations and controls a light through a relay. This circuit needs to be switched on permanently(24 hours a day). The first few months the circuit worked perfectly ,but after about 6 months it started malfunctioning. It showed senseless things on the 7 segment display(it showed just parts of numbers), then it lights the bulb on the indicator LED but it's not switching on the relay.This is not the expected behaviour. The thing is it won't always work that way. Sometimes it works perfectly. Then it starts again to malfunction. There is no exact order in which it works.

Now my question is why do these circuits behave this way. I assume this may be because it works all day without any intervals.This kind of application needs to work all the day. I use PIC because I know about pic only. Is atmal more reliable than pic? (I asked because atmal is used in most of automation applications,more frequently than the pic is used) I need some advice from an expert in digital electronics. How is this kind of industrial applications built? Are there any special rules to follow? How to design more reliable circuits? Any advice or guidance from an expert will be highly appreciated. Thank you...

As it's suggested in the answers,I'll edit my answer by providing additional resources to help figure out the bugs in the design.

Below is an image describing how the circuit looks like after it was built. It's a 12V center tapped transformer which supplies power to the circuit.It's rectified using a half wave rectifier, then regulated using a 7805 IC. 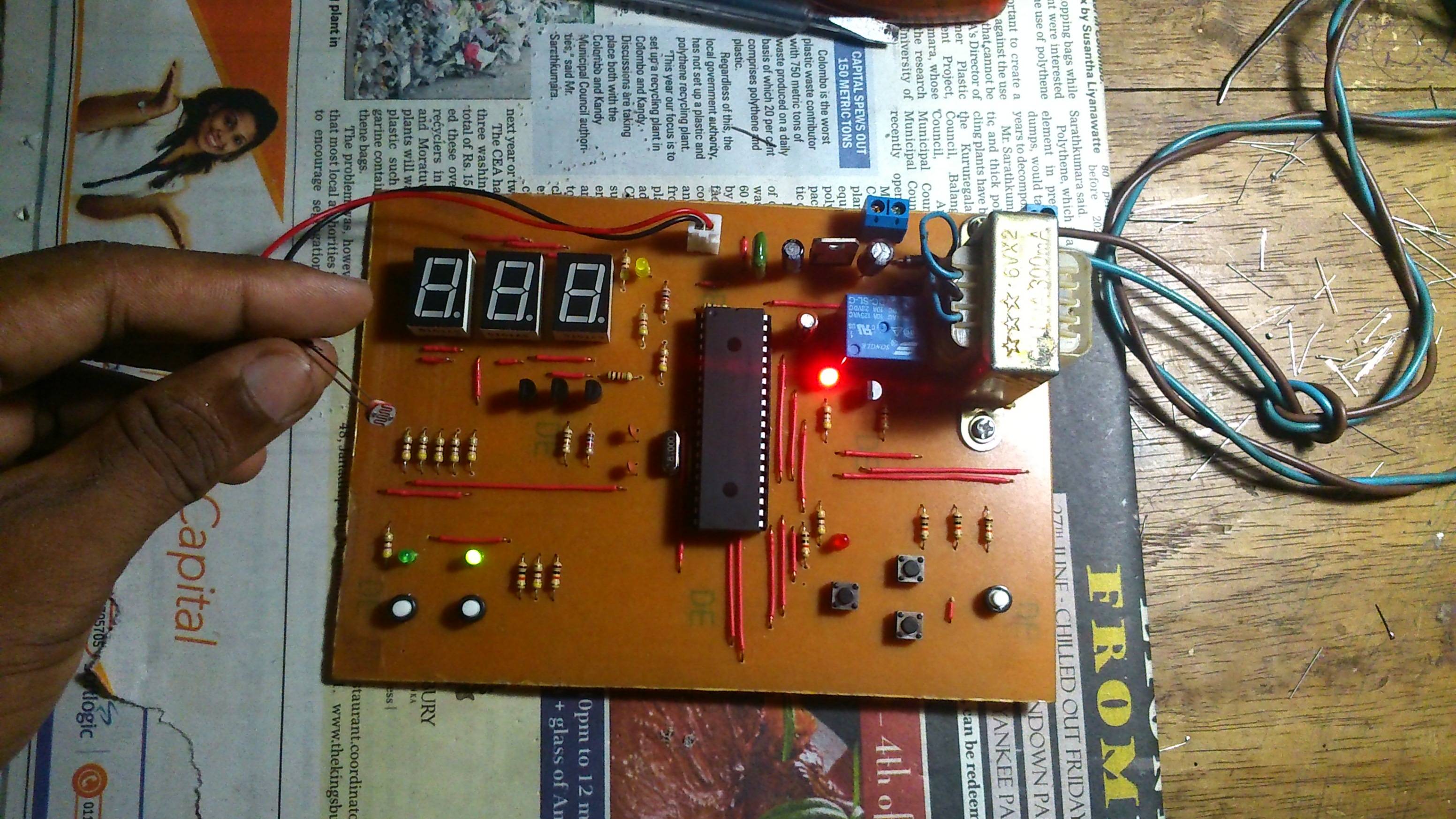 Below is the schematic design. 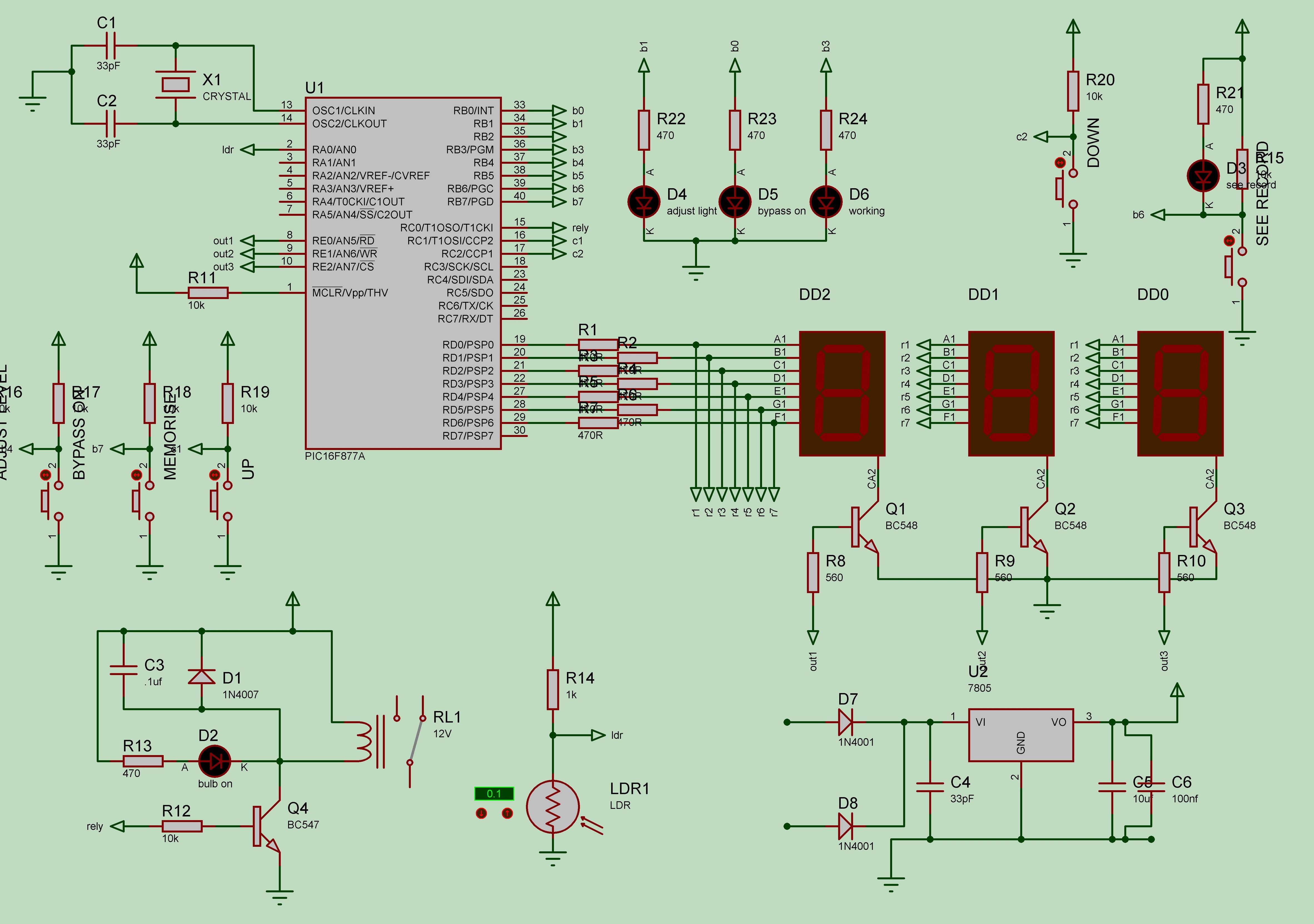 What you really need to do is find the failure mechanism, you need to know why it is failing. Once you know why its failing you can address the problem. If you cant find that then you will have to make your design invincible to stop any problems from occurring. If you don't you could switch microprocessors and still have the same problems. If you do want to switch, ST makes some great microprocessors that are more suited for industrial applications.

Since you don't say, I question how the troubled circuit is physically constructed - since this sounds like EXACTLY the type of problem that is typically seen when someone who does not solder constructs a circuit on a temporary "push to connect" breadboard and leaves it for a few months.

If this resembles your case, there's your problem; if not, I'd still suspect poor connections, but it becomes a "skill at soldering" issue more than a "failure to solder anything" issue.

You don't have a decoupling capacitor on the PIC supply, but on a small board like this you'll probably get away with it. You might also want to add brown-out protection so that the PIC is reset if the voltage drops below a threshold.

But I'd be looking at your code.

For starters, you should have the watchdog enabled on the micro. If the code stops working properly, the watchdog will restart it.

Most likely though, you've just got a bug somewhere. As an embedded software engineer by profession, I'd guess it's related to the interrupts, because that's where beginners most often make mistakes. As a beginner though, there's a massive set of mistakes you can make in code, so that's just the first place I'd look. (Don't be offended - I made a lot of those mistakes myself, including when I really should have known better. ;-)

I agree with the comments that you need a nice fat capacitor either side of the 7805. Especially with a relay there. I expect this is the root issue. I'd add a decoupling capacitor across the PIC's power supply lines too.

I would also be looking for dry joints.

I would also be thoroughly checking my program, and using whatever watchdog facility is there.

But here's a couple of interesting bits from your question:

I'd be trying to work out what has happened. Has the PIC crashed for instance?

Now, if I read your schematic correctly, then in order for each of the 7 segment displays to be showing something, and something different and constant on at least two of them, then each of Q1, Q2 and Q3 must have still be being turned on in sequence, and the outputs to the segments must have been correct. This would tell me your PIC is still running at least some of its code, but somehow the digit output has been scrambled. For instance perhaps it's not been given a digit 0-9 to display, but a digit 17 or similar (for which it gets the digit layout from a random memory location).

Looking at the schematic, then unless the PIC output is pulsating or something (not impossible as that's also a timer output port), this would have to be either an electrical failure (e.g. dry joint), a PSU issue (see above re capacitors), or the Q4 transistor is (perhaps) not fully saturated. I haven't read the PIC data sheet, but a BC547 has a maximum IC of 100mA (hopefully that's enough to drive your relay and the LED), and hFE of 120 at that sort of level, so you'll need about 1mA in. 10k might therefore be a little much. I might try 3k3.

Further, you have no useful means of debugging. As your display is on all the time, perhaps you could make the final decimal point dot flash once per second (or similar) to indicate all is well.

If I had to take a wild stab in the dark, I would guess that particularly when the relay is on, the circuit is drawing significant current. Because of the lack of a large capacitor on the input side of the 7805, when the AC voltage crosses zero, the 7805 will not be providing any output current (and may indeed be draining the capacitor itself) - from the 7805 data sheet 'The input voltage must remain typically 2.0 V above the output voltage even during the low point on the input ripple voltage'. The voltage on the PIC will therefore be reduced, perhaps enough to crash it. Put a scope of the 5V line next to the PIC and if you don't see anything other than a nice solid 5V line, you know you have an issue.

Any time you have erratic behavior in a microprocessor, there are two main sources for the problem. 1) missing or insufficient "bypass" capacitors, 2) "floating" microprocessor pins.
Every "chip" needs to have a bypass cap, right at the chip pin connected to Vcc (+5v).
Any pin not used, must be tied high or low, but never left "floating."

I agree that you are not driving "hard enough" Q4, I recommend 1K for R12.

Not the answer you're looking for? Browse other questions tagged pic avr circuit-design or ask your own question.

15
What values of resistor and capacitor to use for AVR reset pin isolation?
2
Understanding PIC32 watchdog timer operation
1
Building a variable frequency magnetic pulser
0
Building a motion/activity tracker with AVR Atmega or ARM?
2
Designing a multi-stage BJT amplifier
0
SIM800L and PIC MCU pinout
2
How do people estimate node voltage and branch current by observing a circuit?