As many of you probably know, a normal light emitting diode, while very handy as a cheap and ubiquitous indicator, can double as a power generator. The mechanism is the same that is exploited in photovoltaic cells, aka solar panels.

When an LED is exposed to light it produces a current flowing from anode to cathode. This current can be used to directly power a device, or to charge a capacitor so that a periodic load can use the stored charge all at once, when needed.

To give you a better idea of the values involved, the short circuit current ranges from tens of nanoamps up to a few microamps, while the open circuit voltage is somewhat less than the standard forward voltage of the LED.

I am currently in the process of choosing a range of LEDs to test them and see if they are suitable for my application, but I am kinda stuck, mainly because using a led to power something is convenient only money wise, while a photovoltaic cell or even a photodiode is a better choice under many other aspects. No manufacturer that I have seen list the photogeneration current in the datasheet, and this seems fair enough to me, but since I want to avoid testing thousand of LEDs I would like to buy a selected range of them, so I need to better understand the underlying mechanism that leads to photogeneration. 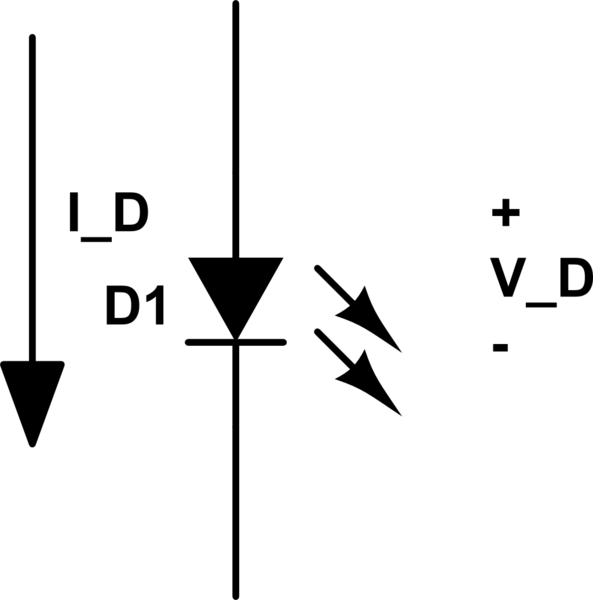 Where \$I_s=J_s\cdot A\$ is technology dependent, and die area dependent. \$I_G\$ is the generation current, and is the parameter I am interested in maximizing.

Here are some things I have thought of:

LED color since the LED can absorb a lightbeam only if the energy it carries is greater than the gap, choosing LED with low energy (i.e. low frequency) gap is a must, to be able to absorb a wider portion of the spectrum. This lead me to choose red or infrared LEDs.

forward voltage this is somewhat related to the open circuit voltage and is not currently an issue for me, and I believe it has no relationship with photogenerated current.

breakdown voltage I do not think this has a relationship with photogeneration.

My question finally is:
Do you agree with my analysis, and do you think I am missing something?
or better
What are the parameters to look at when searching for a photovoltaic panel in the LED section of a supplier?

LED color -- I agree here; LEDs with lower-energy optical emission should have an effectively wider 'absorption band' in the visible spectrum.

reverse current -- I think this could be problematic. As this is a 'porosity problem' with the underlying diode, I see it presenting a likely loss-path for some/all of your photogenerated current. I would (short of contrary experimental data) look for LEDs with a lower leakage, proportional to forward current.

One item I didn't notice in your list, but think it may prove to be an important factor:
Conversion efficiency -- In my experience with using other components 'backwards,' a component that functions more efficiently when electrically powered (as designed) is nearly always more efficient when electrically generating. Thus, I'd highly recommend using LEDs with proportionally higher light output/electrical power efficiency ('color temperature' may not apply here, due to the LED color argument).

I believe you are missing something - collector area. LEDs are made with very small chip dimensions, something like a millimeter on a side. This means that when generating power it intercepts only a very small amount of optical power for "reasonable" light intensities.

Furthermore, although I can't prove it, I suspect that LEDs will only respond to light within its emission band, which will severely reduce the efficiency of the LED as a power generation device when used with a broadband source such as the sun or ambient light. You can test this easily enough - try illuminating an LED with an LED of a different color.

You should google Forrest Mims and LED as detector. Here's my first hit. Forrest did this back in the 80's(?) And I think he's still using LED's for their spectral selectivity.

Ignore the naysayers Vlad - if you are up to it, there's a great practical research project here, that you could dive into. I've used this in the past to directly drive fet gates, and also as a data-input for configuration. Its an idea that is really timely now: nanopower IC's + big area/big array leds mean that they could be viable energy sources. We need some research data on it. There are plenty of theories, no data.

You might want to try led-filaments made for light bulbs.

It is not directly answering your question, but they are a standard production part with ~20 led die in series.

On aliexpress, there are white and red versions available, and a couple of different lengths. There are also big COB arrays of leds, as well as 5W leds that seem to have 4 big die in one package. All of these can make higher voltages.

Some vendors boast that they use larger die than competitors, presumably these would be preferable.

White leds are using blue die, and I expect that the phosphor coating is down converting light out of the wavelength range the led can convert. Cold white leds do less conversion. So cold white and red are likely to work best.

As my previous answer is announced to be deleted, what I can say is what I know and not speculating beyond. If I have no knowledge of the chemistry of green LEDs that makes them sensitive to light, am sorry. Am exposing only what I do know.

Green LEDs are the ones that have the best response as photo detectors/generators. I tested and demonstrated to my employer, manufacturer of very high level audio processing equipment, that green LED indicators on the front panel were inducing spikes back into the circuitry in events as photographic flashes. Green LEDs are also used in heliostats for sun light tracking/sensing. Their output is very modest, but do generate better than other colors. The web should also disclose the behavior mostly in heliostat sun tracking circuits, and I did build one myself years ago to kill mold in my north wall.

Not the answer you're looking for? Browse other questions tagged led energy-harvesting photonics or ask your own question.