I need to pass a domestic -10dbV audio signal (it should oscillates between -447mV and +447mV) to a microcontroller's ADC which only accepts signals that oscillates between 0V and 5V. I think that the simplest solution is to implement an op-amp summing amplifier circuit. My final configuration will look like this:

Now the question is: can my old UA741 do the work? My fear is that it cannot accept a potential of 0V as Vcc-. In the case the UA741 is not suitable, can you point me out a valid replacement?

This answer attempts to roughly describe 741 for beginners and why this ancient beauty should be laid to rest forever.

EDIT : Added : This answer also applies to the LM358 opamp

What are limitations of the 741

This answer attempts to roughly describe 741 for beginners and why this ancient beauty should be retired after a long and distinguished career.

This means that, for any given supply voltage, the output can only get within a few (1 to 5 volts) volts of Vcc and Vee (commonly called “the rails” depending upon load.

Using single supply (with or without virtual ground) : Suppose +15 volts is used for Vcc, and Vee = ground. Output could go up to 10 volts and only as low as 5 volts (worst case). You might get the 741 to go as low as 2 volts, but not lower. Output can never get close to 0 volts (ground).

Current technology (and inexpensive) has what is caled “rail to rail output”. This means the output can approach the rails (Vcc and Vee) even with single ended supply (Vee connected to ground).

Input offset voltage : Specified as 6 mV worst case. Without nulling offset voltage or other means of correction, this means 0.006 ( 6 mV) will be amplified by the gain of your amplifier and will appear on the output. So if you want a gain 0f 50, you end up with 0.3 volts error on your output signal.

Current technology (and inexpensive) has offset voltages of well below 2 micro-volts. Reduce your errors by a factor of 1000.

Input Offset Current : Typical for 741 is 20 nA (that is nano-amps). Current technology (and inexpensive) has offset currents in the pA (pico-amp) range. Reduce errors due to offset by greater than a 1000. Input offset current becomes very important in high impedance circuits.

Input Voltage Range : For Vcc =15 and Vee = -15 this is specified at inputs must be less than +/- 12 volts. Don’t expect the circuit to work if inputs get within 3 volts of the rails.

Large Signal Voltage Gain : Typical specification is 200,000. This sounds like a wonderfully high gain. But it is not. This is actually quite a low gain for op-amp. Current technoloty (and inexpensive) have gains well in excess of 1,000,000. High open loop gain is important for many reasons (far beyond this answers intent). For amplifying DC, the 741 gain might be ok. For amplifying AC signals, you should seek more than a 200K gain.

Slew Rate : Specified at 0.5 volts per micro-second. This means that the output could rise by 5 volts in 10 micro-seconds. That is pretty slow if you expect anything more than audio frequencies.

Replacements for 741 : Commentors suggested MCP6001, TLC271. For single ended supplies, the TLV2462CP is a good candidate. You can go to various suppliers websites and search for what parameters are important to your project.

The 741 deserves a nice retirement. Let this device enjoy its retirement. Give a big round of applause for a job well done for many many years.

Just because your 741 is old, doesn't mean it can't do the trick. Audio is not very demanding in terms of performance, so your old op-amp is likely very well suited.

You needn't worry about the 0v for -Vcc. All you need to consider when power op-amps is that the difference between +Vcc and -Vcc is positive and high enough to power the device.

For your application I would suggest giving the source a false ground of 2.5v. This will put it well within the range of the ADC on your micro as well as the 741. Remember especially that the 741 output can't go all the way to -Vcc or +Vcc.

Here's an example of what I would do. You'll want to play around with the components to get the response you need. Other may also want to recommend suggestions to improve this but I just threw it together to give you some ideas. 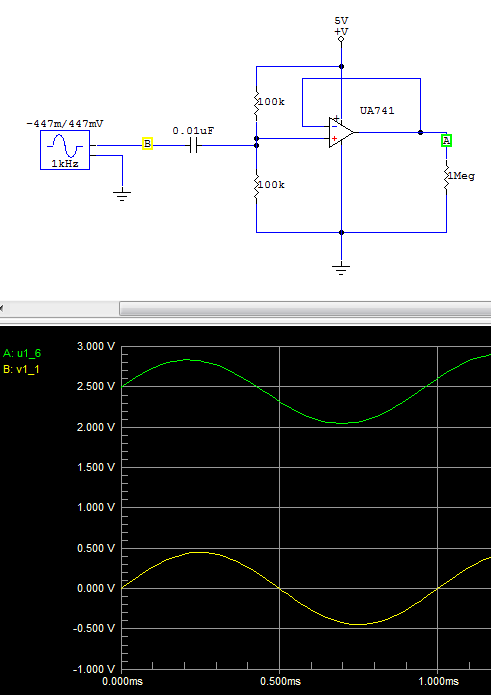 Not the answer you're looking for? Browse other questions tagged microcontroller operational-amplifier audio adc or ask your own question.

0
Why output of Op-amp 741 is not high when i used in compared mode.?
0
What is the exact purpose of this 2.2kOhm resistor in the circuit?
2
+12V and -12V for supplying Op-Amps in my circuit
2
Constant voltage control via op amp and transistor

8
Using the audio input port as a voltmeter
1
Handling audio signals on a 5v ADC
0
Amplifing guitar signal in order to connect it to ADC
3
Use of Cap here
1
OP Amp as audio preamp - am I doing it right?
2
ADC oscillation problem with inductive load
0
Low cost op-amp with Common-mode input voltage range of 1.125V
1
How do I scale a differential signal
1
Implementing low-power variable resistance measurement