My 5th grade son is doing a science project to show that a weak electrical current applied to a lima bean will help it grow faster than a lima bean grown with no current. Following an experiment outlined on the web, he has two Styrofoam cups with garden soil and three lima beans each. One cup has two 12" 18 gauge copper wires connected on one end to a 9 volt battery with alligator clips and the other ends are inserted in the soil. He is supposed to water twice a day, connect to the battery for five minutes per day, and keep track of all inputs. Hopefully the beans sprout in ten days and grow for six before the results are due.

The first time he connected to a new alkaline battery for three minutes and the battery got very warm. Since then the battery has been connected as instructed but no longer gets warm.

I'm no electrical engineer, and the whole thing is just making me ask questions. Any comments or insights would be most appreciated.

Does current automatically flow just by attaching two copper wires to the battery terminals? The copper wires are not supposed to touch in the soil according to the instructions -- what if they did? Does it matter if the soil is moist? Can the amount of current that flows be measured without expensive equipment? Can it be theoretically calculated with any reasonable degree of certainty? How quickly will the battery be drained?

Sorry these are all rough newbie questions -- you can tell I'm out of my league!

Note added 2/18: Thank you for all the wonderful comments, really helping me to understand what's going on. Yes, the battery leads were touching, I'm sure that's what caused the battery to heat, fortunately no lasting harm done, lesson learned, and the battery still tests good on my battery tester. I'm going to try to get a digital multimeter as suggested in several responses to answer the question about soil resistance and find out roughly how much current is flowing past those beans.

At the anode and cathode, if you run this experiment long enough, you'll begin to see the results of these ions reacting electrochemically with the copper. You'll probably notice one is more corroded than the other, if you always connect the battery the same way.

Any charged particle moving, be it mobile electrons in copper, or mobile ions in water, is an electric current. Electric current is measured in amperes (A), often with the metric prefix milli- (m). 1000 mA = 1 A.

You might measure how much current is moving a couple ways. The most straightforward and accurate is to get an ammeter (a place like Radio Shack should sell a multimeter that's cheap and sufficient) and hook it up in series with the battery, like this: 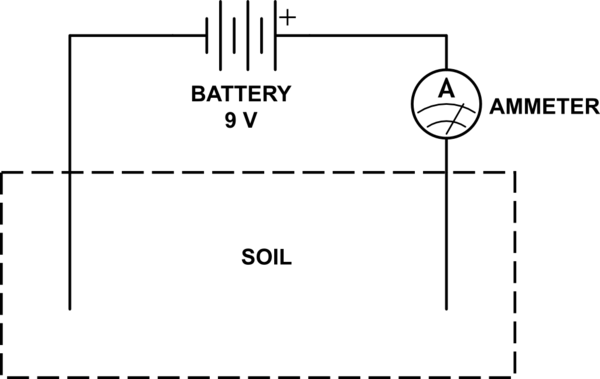 It doesn't really matter on which side you connect the ammeter, or in which direction. If it's "backwards" then it will just indicate a negative current.

The magnitude of the current that will flow will be a function of the resistance of the soil. Less resistance means more current. Resistance is measured in ohms (Ω), often with a metric prefix like kilo- (k) or mega- (M).

The resistance will depend on (among other things):

If you have a multimeter, you can also set it to measure resistance, disconnect the battery, and connect the meter probes where the battery would be. I just measured the resistance of the closest wet soil to me and found it to be 382kΩ. Your results will likely be very different.

In any case, soil resistance would be a good thing to include in the data in itself, since it's independent of the battery's condition, and it's another variable you can analyze. You might even see how watering affects soil conductivity, and attempt to keep the conductivity of the test and the control beans the same.

Battery capacity is usually specified in mAh, or milliamp-hours. A 9V alkaline battery has a capacity anywhere between 90 mAh and 300 mAh, depending on how fast you discharge it. A faster discharge means less capacity.

1 mAh means the battery can supply one mA for 1 hour before being dead, or 2mA for half an hour, or 0.5 mA for 2 hours. This is a good opportunity to practice dimensional analysis. For example, if I measure the current to be 0.02 mA, I might estimate the battery will last for:

I can tell you that if the battery is getting hot, quite a lot of current is flowing, and the battery will be dead very soon. So either your soil resistance is much lower than mine, or there's some fault in your setup, like the wires in the soil are touching. Using a battery that starts fresh and is dead before the experiment is done will probably invalidate the results, so I'd suggest investigating this further.

If the battery is getting hot, it sounds like you're producing a good deal of current, and not a little bit, and the battery may be dying very fast.

To provide a constant, small current very accurately is probably above and beyond what you want to do. I have a suggestion, though, that may get you close.

Instead of hooking up the battery, directly in its place hook up a $4 digital multi meter that you can buy in a place like Harbor Freight, and pay attention to the number you get when measuring the resistance (you'd need to turn the knob to "ohms"). Let's say the number you get out is 200 ohms (I have no idea if that's even in the ballpark -- also the number may change with watering). Now, let's say you'd like to generate 10 milliamps of current. Since V=IR, and V=9 volts because of the battery, 9/0.01 yields 900 ohms. Since you've already got 200, you need to add a resistor of about 700 ohms in series with the dirt. You might be able to buy resistors in Radio Shack if you can find one that's still open.

All this assumes that there's a DC path for current, which there seems to be as the battery gets hot, and that it won't change over time.

If you can't make the measurement, you might just put a 500-700 ohm resistor in series anyway.

First thing to try: move the wires in the soil further apart.

An Engineer would "add a resistor in series". You probably don't have a resistor lying around the house, but they're easy to make!

Make a 2-inch square, really dark, on a piece of paper, with a pencil-- graphite conducts, but not perfectly. The black square is your resistor. Tape wires to opposite sides of the square, making sure they're really firmly on the graphite. Maybe use a weight to squish the wires onto the graphite.

Which is what we mean by "adding a resistor in series".

Extra credit: vary the current going through the soil by moving the wires closer or farther apart, and by varying the size of the graphite square.

Then make a chart! First prize.

Not the answer you're looking for? Browse other questions tagged batteries current or ask your own question.