How are led controllers able to switch high power/current without becoming hot?

I'm quite new to electronics. I'm trying to power a DC 12V 5A (max) led strip from my raspberry pi. I have constructed a (working) schematic where the main component is a IRF3205 MOSFET controlling the high power circuit.The main problem with this kind of circuit is that the MOSFET becomes really hot. 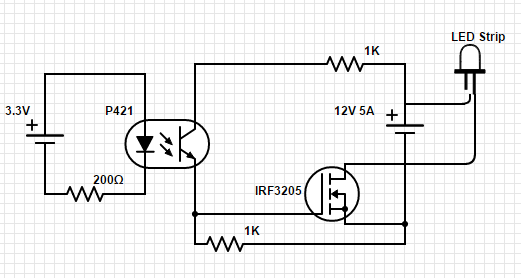 Led strips like these most of the time come with a Led Controller included. Mine for example came with the one below. These led controllers become merely warm, while still claiming to be able to switch a maximum of 24V and 12A. 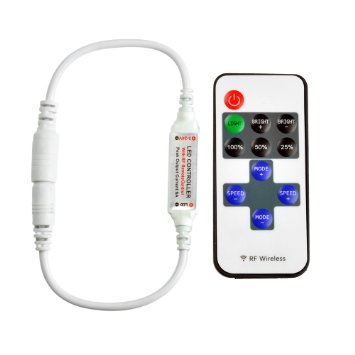 How are these tiny led controllers able to switch such a high power/current while not becoming (extremely) hot?

The Source-Drain voltage of the circuit as described by the schematic seems to be 0.45V at a Drain current of 1.3 Amps. The Gate has a voltage of 6V or so, but I'm not 100% sure because of my not-always-accurate multimeter.

Note: Unfortunately I can choose only one correct answer, but all of the answers given below are excellent and well-worth reading. The marked answer will be the one that is the most relevant to the original question.

When the switch is off, there is no current through it therefore no dissipation.

When the switch is on, there is very little voltage across it, therefore no dissipation in the switch.

The IRF3205 you list has Rdson=0.008 ohms, for a total dissipation of 1.15W at 12A. Put it on a little 40K/W heatsink (about the same size as the transistor!) and it will reach only 46C above ambient, which is perfectly acceptable. While the junction would be at about 75C on a warm day, the casing and heatsink might still feel only a little warm.

However! The way you have drawn the schematic means that Vgs will reach only about 5V because of the voltage divider effect of your two resistors. The IRF3205 needs Vgs=10V to turn on properly, so your FET will have much higher on-resistance than the datasheet headline value of 0.008R, and this is probably why yours is running really hot. 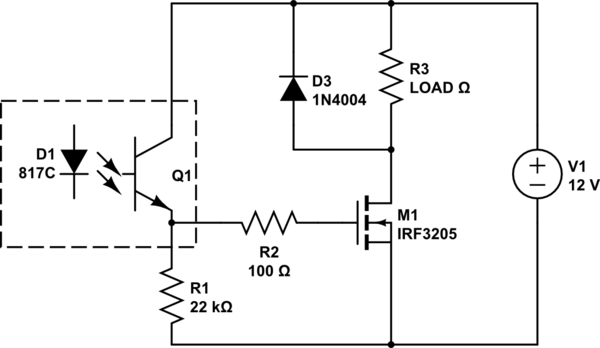 D3 is theoretically not necessary for an LED load, but will prevent parasitic inductance in the (probably-long) LED cables from blowing up the FET when the LEDs turn off.

The cheap little controllers achieve high currents through the use of low-Rdson FETs, as you suspect, and careful heatsinking, usually through copper planes on the PCBs. Just because the outside plastic case feels only slightly warm does NOT mean that the device junction itself is particularly cool.

Edit: interpolating from a dodgy graph in the 3205 datasheet, I suspect that Rdson ~= 1 ohm for Vgs=5V. So your schematic is going to cause it to run incredibly hot and the load will get a lot less power than you expected.

The heat you are describing is not so much related on the current and voltage they are switching, but rather the current they are passing and their efficiency. Any solid state switch (basicly a mosfet) has some resistance across it even when it is turned on. The lower this resistance, the high the efficiency. In your example you list 12A, so if this 'switch' has an on resistance of a mere 1ohm, it will still be trying to dissipate 144W of heat! The Power dissipated is represented by the equation P = I^2 * R, where I is the current your circuit consumes when it is switched on and R is the on resistance of the switch. For the switch to stay cool it either needs to have a low on resistance, R, or be switching a low amount of current, I.

To give some sense of scale to the measurements, the human body has a resistivity of about 1,000ohms and a standard LED consumes about 0.02A

A Mosfet attempts to be a perfect conductor. It can't, but it gets very close. Just like a wire does, it has some resistance, and will dissipate power as heat, depending on that resistance. This becomes a problem when the wire is too long (Voltage droop) or when the voltage + current is too high (wire heats up depending on resistance/cross section/size).

I say should, as the RDS(on) has three caveats.

Simply wire it as you want, and measure the voltage across the Drain and Source, and the current through the Drain. With those two stats, you can calculate the RDS you are seeing, and then calculate the Power in Watts that it is dissipating.

Note: You have a voltage divider of 1k/1k or half of the input voltage. At Best it's 6 Volts at the gate. And the NPN based Opto is switching on the high/middle side, which may bring that down more. Not an ideal setup.

The LED Strip Controller
The mosfets used in LED strip controllers is simply chosen for best conditions based on a known VGS and assumed 2 Amp ID. The duty cycle and pulse width vary, even at 100% ""light on"" it's not really 100% duty cycle (more like 90%, or less for red). If we guess worst case, crap RDS for those at say 0.5 Ohm, that's only 2 Watts, which can be handled with copper traces on the controller board. Ideally, the RDS should be a very small fraction of an Ohm. 0.5 is not good. 0.005 is 2 orders of magnitude better.