I'm working on a hobby project and bought some cheap linear actuators with motors in them. Due to the terrible motor speed/torque, I switched them out. Now I have to implement a safety feature to kill the power to the motor whenever a limit switch is actuated in the device. (It tears up the device if it goes too far.)

Below is the project setup, but this is what I think i need to do. I need to a N-channel power MOSFET to control a P-channel MOSFET. The first one can be this one and will control a 12v current from the power supply to trigger a second MOSFET. This second one is what will kill the power to the motor whenever a voltage is applied. I think i need to use two because the voltage difference between the arduino and the 12vdc power supply is too much to trigger the P-channel MOSFET by itself quickly enough.

How off am I? I'm a hobbyist, but i'm trying to design it right before building it. 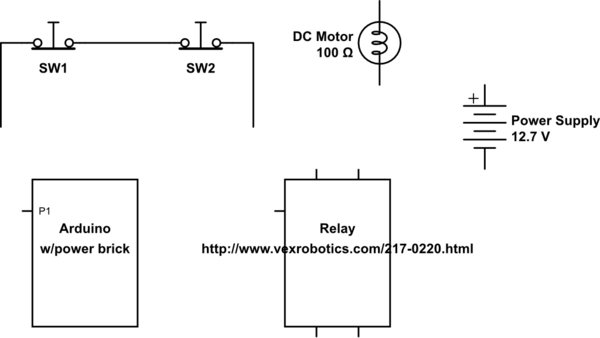 To make it clear: This is a safety shutoff and will only be used to protect the motor from destroying the actuator if there is a bug in the program actuating the device. I can flip the power manually if the power gets cut because of this new circuit. I just can't rebuild the gearing.

You're doing it the hard way (even ignoring a bunch of craziness and nonsense in your schematic, like shorting the power rails through two switches), because it's really annoying to control a FET in series with a load (the motor) where the voltage is all over the place because of the H-bridge.

The right answer is to leave the motor directly connected to the H-bridge and to control the H-bridge inputs using the limit switches.

What H-bridge are you using? Its control scheme (ENABLE+DIR? FWD/REV?) will change how you wire it up. You don't want to completely disable the motor when an end-stop is hit, you just want to prevent it from continuing in the same direction.

You say "H Bridge Relay", so I'll draw it as a pair of relays:

With this schematic, the motor will be idle by default, will run one way when FWD is pulled up, and will run the other way when REV is pulled up (connect these wires to microcontroller outputs). If you pull them both up, it will stop.

SW3 and SW4 are your limit switches. Each one, when open, prevents the motor from running in one direction. The motor can still run in the other direction though, to allow it to come away from the stops.

If your bridge is something else (some FETs controlled by some fancy silicon?) the control scheme will differ, but the desire is the same: each limit switch prevents the motor from running in a particular direction.

Edit: I see you've posted the H-bridge model number now. It's mechanical therefore too slow for PWM, but it's also wired pretty much like I've drawn it above, with opto-isolators in place of the transistors I've shown.

If your limit switches are wired together and have only two terminals present, then you can't tell which switch has been hit, so you can't easily make a safe-in-hardware system. You would need to keep track in software of which direction the motor is running and monitor the limit switch in software. The software would be responsible for deducing from the motor-direction which limit switch was hit, and if it goes wrong (or the software crashes), your motor will crash into its hard stops.

If your limit switches have a common connection (3 pins), then it's doable like this: 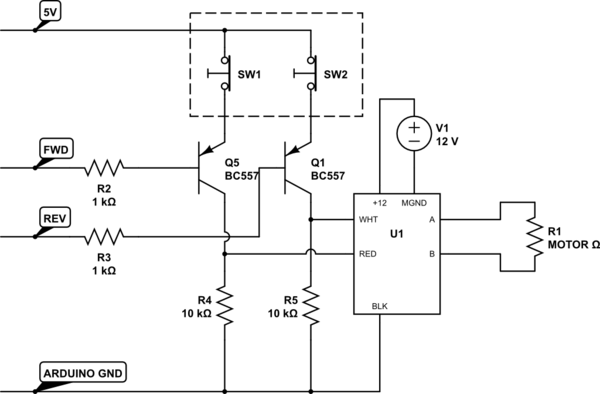 The conjugate with NPN transistors would also work but it's less obvious which limit switch affects which end. Either way, you will need to do some testing+experimenting to make sure that things go in the direction you expect and stop in the correct directions.

You mention in a comment that the limit switches are normally closed and in-series. This is most unusual because once a switch opens you won't know which one and you won't be able to run the motor to move off the switch.

The circuit in Figure 1 shows a more normal setup.

I recommend that you check the limit switches again and see if you can set up and understand a simple circuit like this before moving on to electronic control.

A photo and link to the actuator datasheet would be most useful. Also, note that the switches should be set back a little from the physical end of travel to give space for the motor to decelerate to a stop.

A box is a H-Bridge, RLY1 is a power on relay, Sw1,2 are limit switches and a button Safety override is used to switch on manualy to move motor back in case it hit the limit switch. EDIT: Added start stop button to eliminate the glitch, when limit switches are overdriven on the edge.

Not the answer you're looking for? Browse other questions tagged arduino power transistors relay or ask your own question.

7
Why do I need a transistor to control a relay with an arduino, and which one should I get for this circuit?
0
Relay circuit for circulator pump and actuators
0
Using a P-channel MOSFET as an on/off switch
0
Ic driver for a N-channel MOSFET
1
AC 220v Single Phase Motor Control using relay
0
Linear actuator. Monitor end switch with arduino
0
Inverting output of gate driver for MOSFET
1
Normally closed mosfet circuit
1
Using P-Channel mosfet with arduino
3
Is this simple on/off circuit with MOSFET correct?