Here is a simple simulation of a schematic for my solenoid: 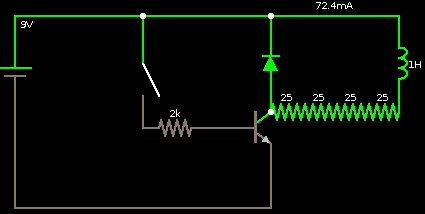 Once the switch is closed, the solenoid will be activated with ~80mA charge. When it is open (where the screenshot is at) it will discharge via the resisters in a looped path, due to the diode.

Now those resistors are cumbersome. A 100 Ω resistor would reach ~800mW of power during discharge, so for this specific test I split it in to four 25's in series.

I would like to provide a lot more power to my solenoid however (200-800mA), how would I be able to discharge it safely, with minimal current resistance when the switch is closed?

I could possibly use some wire-wound resistor (~5W) as a last resort, however those I do not have currently.

The resistors in series with the solenoid are a potentially* valid way to reduce the solenoid on current BUT it means your solenoid is not really the right one for the power supply you are using.

If you want extra resistance (see below) put it in series with the diode.

The reason to put extra resistance in the circuit is to cause your solenoid to relase FASTER when the power is turned off !!! This is not intuitive :-).

Thereason is that the time constant of an inductive loop with current flowing in it is
T = L/R, amd so by adding extra R we reduce the time cinstant ! :-).
This is STILL not intuitive!

What makes this so is:

Now add a resistance of say 10 x Rcoil in series with the diode.
Let's call this Rdiss
wGEN vIN IS removed Iin will flow.
V_rdiss = Iin x Rdiss = Iin x 10 x Vcoil.
Dissipation in Rdiss = 10 x as much as in Rcoil before so ~ exponential decay will start at 10x the rate before. (Actually 11x as Rcoil is still present.)

The solenoid will hold in until Ihold is reached - and this is being approached at aout 10x the rate without an R.

SO adding a series resistor did in fact reduce hold time or increase release delay. FWIW.

When you see the rating of a resistor it is for peak dissipation, often if you are just going to be discharging resistors on an irregular basis you do not need to have high wattage resistor as your resistors are really not getting many joules of energy. It is high wattage, but a very short time.

Do some testing with lower wattage resistors for discharge, you will find they can dissipate much more then needed. The issue in your current circuit is that your resistors are forming the limiting for your solenoid all the time, meaning a lot of heat. The major point that is invalidating your simulation is the lack of a resistance for your solenoid. You should look up the resistance of your solenoid as it will significantly resist current flow on its own.

Not the answer you're looking for? Browse other questions tagged resistance solenoid discharge or ask your own question.