I'm currently designing an equivalent of the mass-spring-dashpot system, and during the design phase I realized I don't fully understand how PID controllers physically work.

Below is an image, the top half of which is the physical setup. There's a mass hooked up to a spring and dashpot. There is some magical position sensor that outputs the position of the mass (ignore how it does this), and there is a motor attached to the mass so we can apply a force to it. The position sensor feeds into a computer, and the computer controls what force the motor produces.

The bottom half is what I imagine the control loop looks like. We have some set point for the mass, and the offset (error) is fed into the PID controller, which outputs a current which is fed to the motor, which outputs a force which acts on the mass, which thus changes the position.

My question is that the input to the PID controller is a position (namely x_set - x_actual), but its output is mysteriously a current. How is this possible? The PID controller computes integrals and derivatives of position, which in no way is relevant to amperage.

Any help is greatly appreciated. ^^ 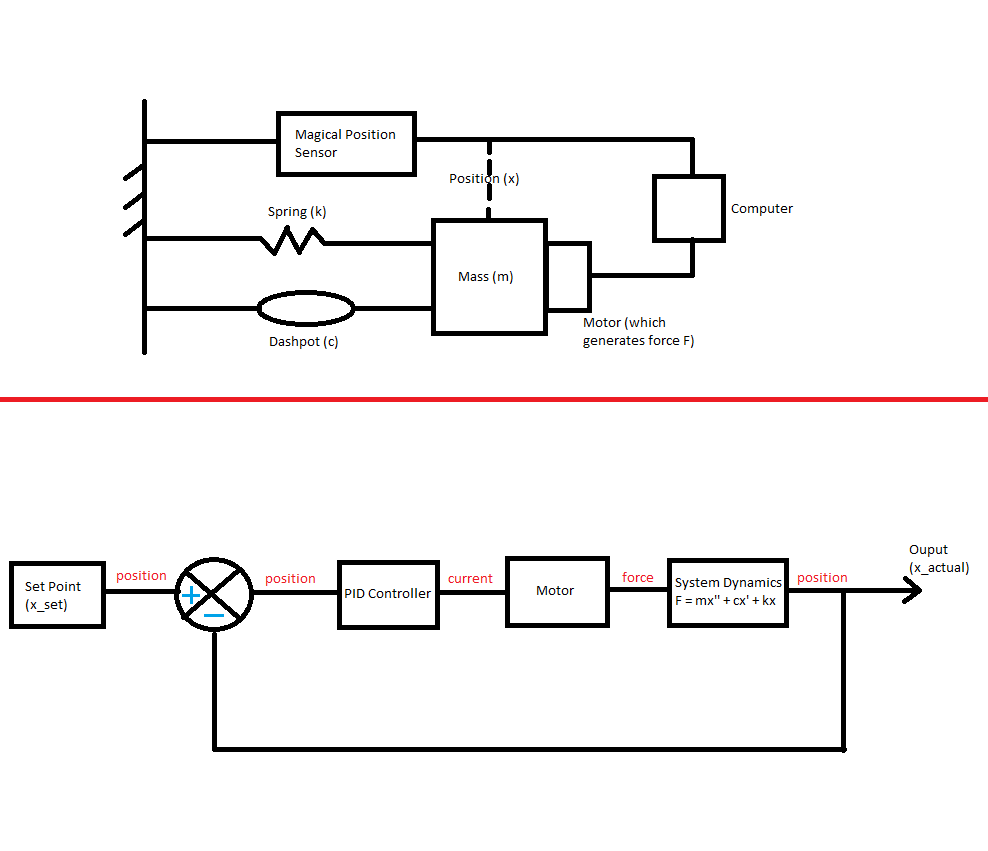 The input to the PID controller is a signal that represents a position.

It could be a voltage, or a current, or a digital number. The exact form of the signal doesn't matter, because all it has to do is represent to the controller what the position is.

If it's a digital signal, the set point will be a number representing the desired position into a digital subtractor.

If it's an analogue signal, it might drive the motor directly, or via an amplifier. A digital signal could be converted via a DAC to drive a conventional motor, or may stay digital all the way into an ESC to drive a stepper or brushless motor.

Neil has a perfect answer for you, but this confusion comes up again and again, so it wouldn't hurt to emphasize the relationship between mathematics, models and reality.

In reality, you will have physical units, in your case the item that you wish to control, the environment it lives in, and also sensors, actuators (motors) and a control apparatus (usually an electronic circuit or a micro-controller) which you add in order to control your item.

In order to understand the behavior of your resulting system, as well as make good design choices we have to turn to modelling the systems that are in play. This is a process of approximation, where we ignore details that we think is non-essential to the system behavior yet retain the overall behavior of the system.

For instance, your system dynamic equation is based on Newton's Laws, but obviously you might add things like friction and aerodynamics, variations based on heat, compression of the mechanical parts, etc. Your actuators are probably designed to be fairly linear around their operating point, but they can also be modeled as non-linear equations. Even your controller part is most likely a simplification -- for instance, no electrical circuit is 100% accurate, nor operates instantaneously -- and you haven't modeled that. But that is okay, it probably won't change the efficiency of your control by much.

The fact that you use the current \$i\$ as an output from your controller tells me what type of output you intend.

With this model, you can now do neat things like simulate it on a computer. This might indicate what your PID constants should be. You can calculate the frequency response curves, in order to find out if the system resonates at certain frequencies.

Finally, notice that just about everything in control depends on time. This is often then just omitted, and we also use the notation: $$ \dot{x} = x'(t) = \frac{dx}{dt}(t) $$

To translate the position to a current, you probably need a gain, i.e. k1 A/meters, it depends on the electrical characteristics of the position sensor.

Adding my 2 cents' worth, the input to the PID controller is not the position, but the position converted into a current or a voltage.

To express in words the salient points to help in answering the question, what the other respondents have explained using mathematics:

The mass position feedback sensor is not explicitly shown in the provided diagram, so one may assume it's the unity feedback line going from the output of the System Dynamics' block to the negative input of the summing junction.

The unity negative feedback is to signify that when the user's desired Set Point matches the mass position, the feedback signal from the position sensor has the same magnitude but opposite sign, to the Set Point signal.

The electric motor converts the electrical current or voltage provided by the PID controller, into a mechanical Force or Torque (twisting Force) to move the position of the mass.

Disclaimer: Please correct any misinterpretations I may have made in the text above; I would appreciate constructive criticism.

Not the answer you're looking for? Browse other questions tagged control-system pid-controller units or ask your own question.

1
Understanding the flow of a PI Controller?
0
Simulink Modeling Problem