can i connect wires in a single transformer to get higher volts? 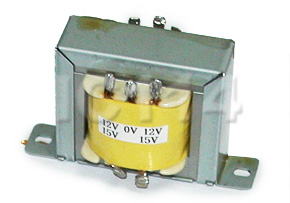 The question might be dumb, but is it able to connect those 12,15v wires in single transformer to get 27 volts?

if it's not possible, will i be able to get 30v by putting one more transformer and connect 15volts in series? it's a 0.7A transformer.

If you connect to the two 15 volt terminals, you will get 30 volts.

Between the two 12 volt terminals, you will get 24 volts.

Between the left 15 volt terminal and the right 12 volt terminal you will probably get 27 volts (but may only get 3 volts, depending on how the terminals are arranged relative to the secondary winding taps).

Yes. You can make a series connection using either two secondary windings of one transformer or secondary windings of two transformers. You need to connect the end of one winding with the start of another. If the start-of-winding terminal is not marked with a dot or symbol, you will need to do it by trial and error, checking with a voltmeter to see when it is right. If you use two transformers, you need to connect the start of each primary winding to the same power terminal.