If I want to vary speed of single phase electric motor within say, 10 to 20 % max of its rated speed (or torque), is it a good idea to change its run capacitor setting? Either via multiple capacitor and switches or by using variable capacitor?

The wording of your question implies that you are asking about an induction motor that has a capacitor that remains connected to the auxiliary winding while the motor is running. That type of motor is called a permanent split capacitor (PSC) motor. The following is based on that assumption.

Changing the capacitor value changes the amplitude and phase shift of the current in the auxiliary winding. Reducing the capacitor value lowers the torque values of the torque vs. speed curve as shown below. This method of speed control is often used for fans, because the torque requirement of a fan is lower at lower speed. That means that the fan load requirement curve crosses the motor torque capability curves only at one point. For loads that require not much less torque at reduced speeds, this method can be used only for a much smaller speed reduction. 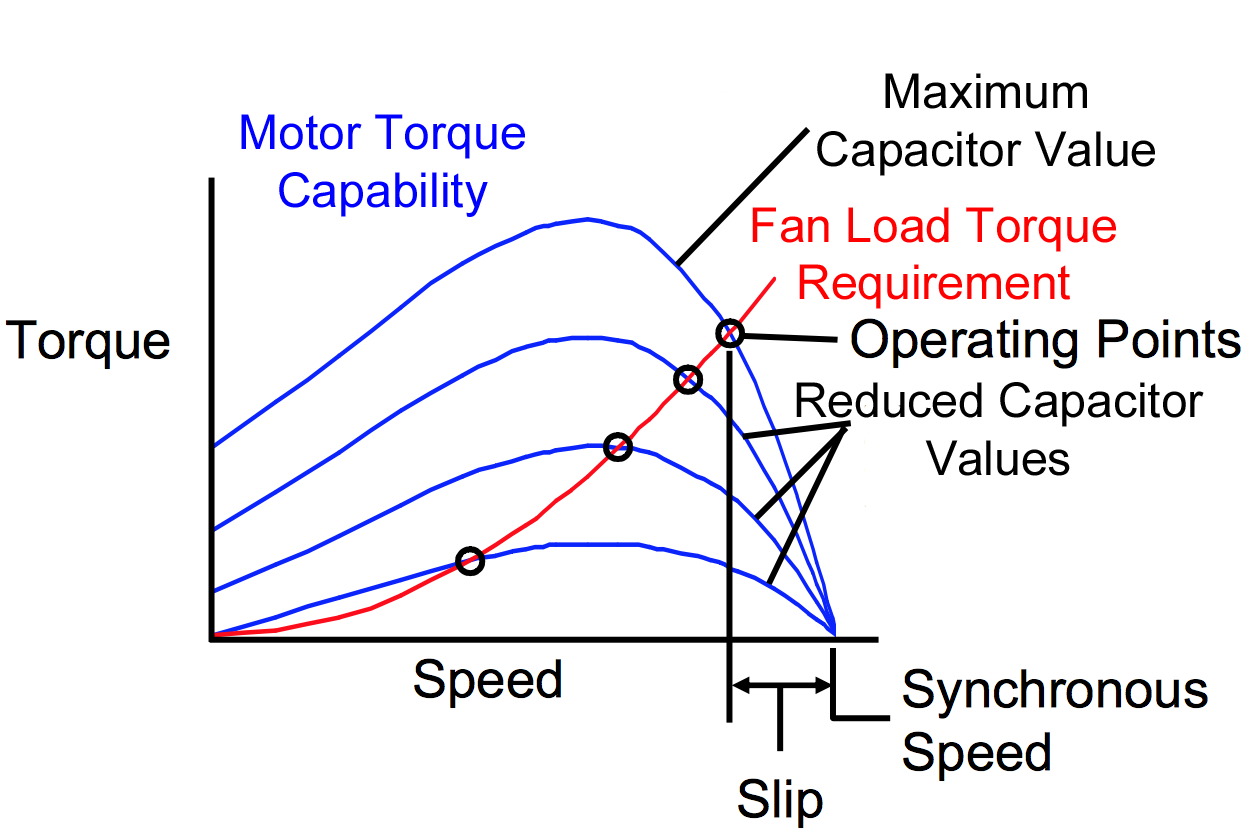 Note that this speed control method works by weakening the motor so that the load forces the motor to operate at a reduced speed. If the load varies, the speed changes. If the load drops to zero, the motor goes to full speed. Without a load, there is no speed variation.

Increasing the motor slip causes increased power to be lost in the rotor. Motors that use this speed control method are generally designed for this type of use. They are not very efficient and are designed to dissipate higher losses. With a motor that is not designed for this operation, this speed control method may not work as well and may cause the motor to overheat. Proceed with caution.

The speed of an induction motor is largely determined by the AC frequency. The capacitor is there to set it running. Altering the cap value may prevent it from starting or cause it to stall under some mechanical load conditions.

If you look at an AC fan speed controller, you will notice that the first speed setting is the highest speed, not the lowest. This is because the fan induces so much slip at low speed that at the motor may not start reliably at the low torque (low speed) setting. Putting the high speed position next to the "off" position means that the motor gets an initial kick at maximum torque to get it started. 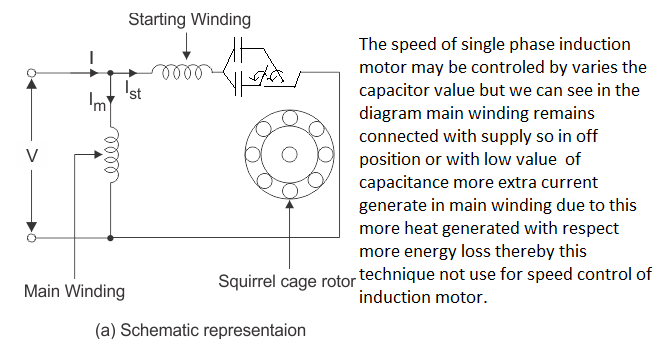 your question related with single phase capacitor run induction motor and my answer is this method is not suitable.

Not the answer you're looking for? Browse other questions tagged capacitor motor speed induction-motor or ask your own question.

7
Calculating the capacitor values to control ceiling fan speed
5
How is air conditioner room unit fan motor controlled?
3
How to control a blower using the analog output from a PID controller?
2
Controlling a 3 speed AC ceiling fan motor with a Raspberry Pi
0
Speed control for PSC induction motor
-1
Triac fan speed control
0
How to control RPM of an AC motor with minimal parts
0
what is the Relation of Motor Starting capacitor with Motor speed?More 2 questions in Desc

4
Multiple motor speed control with a single triac
0
Motor speed based on uF of capacitor
9
Asynchronous motor with motor capacitor sometimes won't run backwards when it should
0
what is the Relation of Motor Starting capacitor with Motor speed?More 2 questions in Desc
0
Is there a way to overdrive a single phase, capacitor start, AC motor?
0
Little torque of single phase asynchronous motor
2
1 phase motor supplied with 3 phase supply