Why does the cathode heat up more than the anode in an electric arc?

In an electric arc, electrons are being stripped from their atoms in the air & fired with high energy towards the anode.

Some of the electrons are fired from the cathode directly, and others are stripped from air atoms, but eventually, if the plasma is sustaining, they end up striking the anode.

Meanwhile, the much larger & denser necleii of the electron-stripped atoms are not drawn through the arc with as much speed, any many end up dissipating into the surrounding gas, rather than impacting the cathode.

Due to this imbalance in the impacts of energetic particles, the vast majority of arc-caused heating to the electrodes occurs on the anode.

For more explanation, here is a detailed and informative article from lincolnelectric.com, explaining some of the various properties & arrangements of this tranferrance which are exploited in the verious metal arc-welding processes.

As noted by Marko Buršič in his answer, it depends very strongly on the current density at the electrodes as to which of them will be hotter. This in turn relates to their size and geometry, their material, the working gas, and to some extent the orientation of the discharge in space (because of convection). But if the cathode and anode are the same size and shape, made of the same material, and placed in the same relative orientation, then it is due mainly to ion impacts. 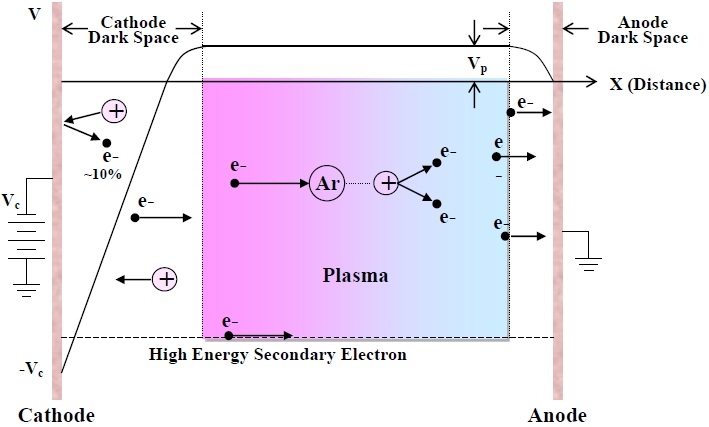 (This picture is for a glow discharge. The relationship is the same in an arc, although the falls are smaller in size and not as large in magnitude. This paper estimates them to be 14V and 4.5V for the cathode and anode respectively, for an air arc between Ag electrodes.)

Not only are the ions accelerated into the cathode, but electrons from the cathode are strongly accelerated into the discharge near to the cathode. This leads to a high power dissipation, and some interesting physics, in this region. The arc simply cannot exist without it! In any case, this volume of extremely hot gas also heats the cathode indirectly. There is no comparable structure next to the anode, and indeed, the heavy-particle temperatures can be seen (in the paper) to be much lower there.

You should upload the photo of the arrangement. It depends on the shape of the electrodes, if they are plates, needles, combination of them. Possible phenomena that you observe is the corona discharge, where the current is flowing without being seen like a discharge, you should test in a dark to see the blue glow. Your electrode can be heated because of high current density at the tip of electrode, while the anode could have different geometry, so a pic can say as many words.

I am going to go out on a limb and boil down Oleksandr R. 's answer to a super simple form even a child can understand, because my inner child, and my real child, wants to know why our flyback experiment is getting these same results.

Super tiny electron sparks are getting sucked into the anode over it's entire surface and drawn away back to the transformer.

Great big and hot ion coals are building up around the tip of the cathode, banging into it, and not getting drawn away but only pushed back into more incoming coals.

Hence the cathode tip gets white hot, melts, and fly's apart rapidly, while the anode barely gets warm and glows more evenly.

Not the answer you're looking for? Browse other questions tagged high-voltage arc or ask your own question.

15
Why does electric arc in a switch prefer a curved path over a straight path?
3
Troubleshooting ZVS flyback failure
0
Circuit building question
4
Does magnetism affect the likelihood of an electrical arc occurring?
0
How would I design a cable line that doesn't leak heat to the ground surface?
17
Light bulb burns out -- why there is an arc in the switch?
16
Why does only the tip of the electrode melt when arc welding?
4
Why are overhead electric wires allowed to have higher voltages than third rails for rapid transit railways?
3
What is the resistance of an electric arc between two graphite electrodes?